The U.S. Department of Homeland Security, which was formed in the years after 9/11, takes responsibility for facilitating comeback from any sort of disaster. DHS emphasizes preparation to speed response.

Preparation has long fortified the U.S. response to dangers. An act of Congress created the Council of National Defense in August 1916. The council trundled along with typical bureaucratic bumps and realignments until July 1974, when its responsibilities were split among the secretaries of Defense, Agriculture, and Housing and Urban Development (HUD). (Mary U. Harris prepared a chronology of civil defense history, 1916–1974, which can be viewed at https://fas.org/irp/agency/dhs/fema/cd-chron.pdf.)

Prevention, usually through the dissemination of good information, has done much that is positive. In 1940 lightning was the cause of 340 fatalities in the United States; the population then was just over 132 million. Fatalities from lightning peaked at 432 in 1943. In 2018 (the most recent data available) there were only 20 deaths caused by lightning. Obviously, the advice to avoid open spaces, not take shelter under trees, and the like took hold.

Between 1980 and 2018, the National Centers for Environmental Information (NCEI) at NOAA tallied 241 weather-related natural disasters in which the overall cost topped $1 billion. (NCEI adjusted amounts to 2019 dollars when it completed the report.) In 2018 alone there were 14 such events. The 2018 events included wildfires in California and Hurricane Michael (Gulf Coast landfall). (Details are at https://www.ncdc.noaa.gov/billions/events.)

For members of our industry, working around natural disasters includes two parts. The first is taking precautions to minimize the aftermath, an effort that includes the knowledge to do the things that must be done in critical situations (e.g., shutting off gas). The second is maintaining the capability to continue working after an event, which includes keeping one’s own business operational and being able to respond to service requests and equipment needs.

According to the U.S. Small Business Administration (SBA), 25 percent of small businesses do not open again following a single natural disaster. The loss of a business affects the entire community. The better businesses are able to quickly get up and running, the less the economic impact to all members of the community.

A manufacturer or distributor that sustains no structural damage in a disaster but loses all financial data because of failure to maintain a cloud-based or off-site backup may be as devastated as one whose facility is destroyed. Where to begin?

Ready.gov, which is the official website of DHS, provides toolkits for business preparedness. Identification of risk is where preparation begins. Prioritize. Don’t ignore minimal threats but be versed in those most likely to occur.

This section reviews some of the salient recommendations from SBA regarding preparation, which can be reviewed at https://www.sba.gov/business-guide/manage-your-business/prepare-emergencies#section-header-0.

Hurricanes—Have an evacuation route and alternate routes in mind. Think about a destination, too. Will there be a place to stay? Whether evacuating or sheltering in place, a disaster kit should be at hand. Keep the kit with batteries, flashlight, first aid supplies, etc., up to date by checking it regularly.

Store a supply of fresh water. Shut off any natural gas supply and disconnect electric service to the facility. 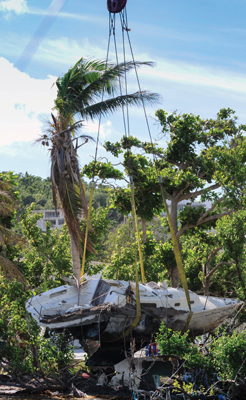 Understand the many dimensions of hurricane damage. It’s not just the sustained winds of 74 mph or higher but also storm surge and storm tide that threaten lives and property. A surge is a dome of water pushed onshore; it can be as high as 25 feet and extend for 50 to 1000 miles in width. Storm tide describes the condition of a surge coinciding with normal high tide, a phenomenon that makes the surge even higher.

Earthquakes—The West Coast, particularly California and Alaska, come immediately to mind when recalling strong earthquakes (six or higher on the Richter magnitude scale). The lower Mississippi Valley at a point where a 360-degree sweep passes through Arkansas, Missouri, Illinois, Kentucky, Tennessee, and Mississippi is also an area vulnerable to high-magnitude seismic activity. Except for a few locations in the Northern Rockies, most parts of the country are at low risk.

However, it’s unlikely any reader has not experienced at least one seismic event—it is always memorable to recall the rolling of the office floor during a minor tremor. Small quakes do remind us not to be careless about objects that can drop from shelves and shatter, as well as why a fire extinguisher should always be at hand.

For businesses in high risk areas, structural codes to minimize damage should be followed. Furniture should be bolted, and cabinet doors should have safety latches. A fire sprinkler system is also a good idea.

Anyone driving when a quake begins should try to stop in an open space. Stay clear of bridges, overpasses, and tunnels. Gas leaks are common following an earthquake. Don’t light a match.

Tornadoes—Conduct training and even drills to make sure all employees know where to take shelter. Figure out the strongest part of a building before a warning is sounded. The general rule is to put as many walls as possible between those sheltering and the outside.

Tornadoes are tricky. They usually come out of the same direction again and again, but sometimes there’s a change and the shelter point might have to change. With doppler images on smartphones, it’s easier to keep informed about direction and make a countermove—unless the phone stops working.

The strongest tornadoes—F3, F4, and F5 on the Fujita scale—generally occur in the central United States, the lower Ohio River valley, and the lower Mississippi River valley.

Wildfires—SBA advice includes verifying water availability before any danger arises, having extinguishers, and designating a safe room/shelter as well as having a way (e.g., battery-operated radio) to access information about evacuation orders and direction of any fire. Any attempt to ride out a fire or claim some belongings before leaving can be deadly. The safest approach—whether a wildfire or a house fire—is to get out and keep going. Get out of the path of the fire. Firefighting is for professionals.

Flood preparedness—Staying and getting out of the way, as with fires, is the best advice. If there is time to prepare, focus on shutting off electricity and gas and taking any measures possible to prevent release of stored chemicals. If there is time to prepare, SBA estimates most businesses can save between 20 percent and 90 percent of stock and movable equipment—a wide range and a good reminder to consider flood insurance.

The Federal Emergency Management Agency (FEMA), which is part of HHS, awards contracts for cleanup and remediation work following disasters. FEMA also contracts for other services and products. The contracts may be short term, or they may span years. There are many opportunities for contractors, distributors, and manufacturers.

Essential to securing a FEMA contract is registration in the System for Award Management (SAM), which is organized by the General Services Administration (GSA). There is no cost to register with SAM at https://sam.gov/SAM/. Take the time now to get registered. The registration opens the door to contracting with any segment of the federal government, not just FEMA.

Following a natural disaster, states issue their own bid opportunities. For instance, North Carolina has a long list of hurricane-related bid opportunities at https://files.nc.gov/ncdoa/9-11-18-to-Present-Hurricane-Related-Bid-Opportunities.pdf. Mold remediation and cleaning appear frequently among the requests for bids.

Each state has slightly different requirements for bids and vendors, so start with the state where a business is based to get a sense of what’s expected. In Texas there’s a two-step process for becoming a remediation contractor for the Texas Commission on Environmental Quality (TCEQ).

Businesses that have not been involved to date in a response to natural disasters can get a quick introduction to hazards and how they should be handled from two documents.

“Safety Information for Response and Cleanup Workers” from the CDC is located at https://www.cdc.gov/disasters/index.html and gives general, electrical, and health safety information bidders should know when citing qualifications.

The OSHA fact sheet “Mold Hazards during Disaster Cleanup” introduces the dangers of mold, the scope of mold clean-up plans, and the sorts of engineering controls, work practices, and personal protective equipment required to complete such cleanups.