This is not a Zane Grey novel. The Union Pacific has long since been completed. Consequences of not winterizing and storing equipment properly will never equal those of getting separated from essentials—axe, pick, and sled—for surviving winter circa mid-19th century in the Black Hills.

There are consequences, though. When 21st century equipment is not properly stored and winterized, failures ensue. Manufacturers offer valuable advice about winterizing equipment. Heed the advice.

“On a cold-water unit, we recommend a pump saver,” says Karl Loeffelholz, dealer division manager at Mi-T-M Corporation in Peosta, IA. “A pump saver is a pressure washer pump conditioner and winterizes the pressure washer.”

The good outcomes that accrue from using a pump saver are many. “It will provide longer pump life,” explains Loeffelholz. “It prevents harmful build-up of hard water mineral deposits and preserves and protects against freezing for safe cold weather storage.”

Antifreeze is important for hot-water units. “On hot water units, we recommend running a 50/50 auto antifreeze through the entire unit,” says Loeffelholz. The protective effect of the antifreeze encompasses the coil.

“The coil is an intricate part of the unit, and with water left to freeze, it will burst the coil piping,” says Loeffelholz. “The replacement cost will most definitely remind you to winterize in the future.”

Following winter storage or any other storage, take the time to do the extras that put the machine in service at optimal performance. The invest-ment can save a great deal of money.

“Pump and accessories—drain the spray gun and hose. Leave the hose disconnected from the unit, drain and clean the water filter, and change the pump oil and antifreeze at the pump’s wet end,” says Stasny. “If gasoline or diesel driven, draining or stabilizing the fuel is part of the general protocol, along with taking time to change the oil and clean or change the air filter.”

Shun shortcuts. “Failure to properly prepare your pump for storage could lead to a costly parts and labor bill to bring the unit back in service,” explains Stasny.

What can go wrong? “It’s usually a combination of issues—dried out seals and stuck valves—both inlet and outlet, caused by the water evaporating over time; pump heads and plungers cracked due to freezing issues; corrosion; and oxidation of wet end areas,” says Stasny. “If the unit is stored with water in the crankcase, rust and pitting can form on any area of the crankshaft bearings not protected by oil. This reduces drive end life.”

Be equally attentive at the conclusion of the storage interval. “When bringing the equipment back into service, I always connect the water line and flush the pump before connecting any hoses,” says Stasny. “This ensures the fluid flow is good and any debris is flushed before you plug your nozzle.” Also, inspect the entire system for any water leaks, says Stasny. And make certain there is oil in the pump crankcase and the engine is properly serviced.

Attentiveness includes awareness of what’s best for the environment. “Be sure to use environmentally-friendly winterizing products when storing your equipment,” says Stasny. “Research local, state, and federal environmental codes and regulations.”

Have a protocol. Follow it. Avoid skipping anything. “It has been my experience that contractors regularly forget to add a fuel stabilizing additive to the gas tanks, such as Ethanol ShieldTM, when storing machines longer than four to six weeks,” says Bill Fischer the VP Industrial Sales with FNA Group in Pleasant Prairie, WI.

“But the worst we have ever seen was a customer with a frozen coil,” explains Fischer. “He started the machine up and bypassed the flow control to heat and unfreeze the coil without tying the trigger gun open. He also forgot that he had removed the pressure relief valve and installed a plug due to a component failure prior to storing the machine.” 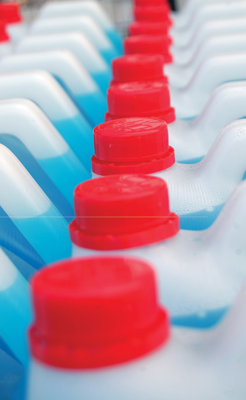 The result was not good. “The coil split in two pieces from the steam pressure and ruptured the coil tank also,” says Fischer. “Needless to say, there is a reason that safety features are put on machines by manufacturers and should not be bypassed except for testing purposes. You should also never use the heating system on the machine to unfreeze the coil.”

Remember the fuel stabilizer. “It keeps the gas from deteriorating while stored,” says Fischer. “And antifreeze not only keeps the water from freezing but also lubricates the pump so that hard water deposits do not form in the pump manifold.”

Be just as methodical—and safe in practice—when bringing equipment back online. “We recommend adding fresh fuel to the tanks and running clear water through the pump and or coil assembly to remove all of the antifreeze solution,” says Fischer. “This is also a great time to lubricate unloader valves and o-rings, do maintenance such as oil and filter changes on the engine and burner systems, and inspect for and repair any leaks in the system.”

Fischer’s company offers a one-page protocol for winterizing that focuses on the engine (attention to fuel stabilizer, changing oil and filter, detaching battery, stabilizing fuel for burner) and pump (attention to running antifreeze through machine). Similarly, Loeffelholz’s company offers a how-to on its website for storing a hot water pressure washer and so on. In short, tap easily available information from the manufacturer and distributor of your equipment to get storage right.

The more precisely a contractor can match preparation and storage to location, the better. Humidity and temperature vary widely, even in regions with a distinct winter.

“Using the correct antifreeze for the conditions the equipment is being stored in is a critical part of method,” says Josiah Hagemann, manager at American Pressure Inc. in Robbinsdale, MN. “We recommend using automotive antifreeze over RV antifreeze or windshield washer fluid…”

Several reasons inform the recommendation, says Hagemann. “Automotive antifreeze is better regulated, which means you get a more consistent product from brand to brand. It is reusable and testable. Just because the temperatures are below freezing doesn’t mean the equipment stops being used, especially steamers when there are ice dams.”

Re-use is economically and environmentally friendly. “Being able to collect the antifreeze and reuse it saves a lot of valuable space in a contractor’s truck or trailer,” says Hagemann.

“We recommend testing the antifreeze with each use,” explains Hagemann. “If the antifreeze has become diluted with water, make sure you have an extra jug of 50/50 antifreeze to blend in until you get to a protected temperature level. For long-term storage, even heated storage, we will still recommend automotive antifreeze because there are lubricating agents that are good for the different components of the equipment, especially the pump, and will help prevent stuck check valves once you are ready to bring your pressure washer out of storage.”

Again, OEM recommendations establish the best guidance. “If your pressure washer has a gas engine, make sure to follow the manufacturer’s recommendations for proper long-term storage,” says Hagemann.

Yes, Hagemann, too, remembers a worst case after improper storage. “Totaled,” he says. “Coil, pump, unloader, hose, etc.—everything leaked. With the parts and labor estimate to repair everything, the customer decided to go with a new pressure washer.”

Just as each OEM provides instructions on storing equipment, each manufacturer and distributor amplifies instructions with time-tested tips. For instance, Hagemann shares details on running antifreeze rated for conditions of storage through the system.

The bottom line in 2017: A pressure washer is not an axe. Contractors need not survive long winters isolated in the snowy high plains.