What’s in the Water?

What’s in the Water?

Editor’s Note: This white paper was presented at the 2015 WJTA–IMCA Confer-ence and Expo held Novem-ber 2–4 at New Orleans, LA.

This paper is intended to raise awareness and start a discussion on Legionella bacteria exposure to the water jetting industry. Field observations are all that currently exist. However, the extent of the presence of Legionella in water logically leads one to believe we have in the past and continue in the present to channel contaminated water through our equipment.

The water jetting industry has not been accustomed to investigating respiratory issues. Physical hazards of the cutting action of water have dominated. But respiratory issues may have been present without us recognizing them. In the late 1990s, Midwest, coal-fired, generating plants often used water jetting to remove coal slag from inside boilers, especially cyclones. These were confined spaces and multi-gas monitors were used to monitor the atmosphere. Because of high humidity and mist, water traps were installed to protect the monitors. Water quickly filled the traps. Condensate accumulated to about 44 ml in as little as three hours with the sample tube in only one cyclone with one 68.9 MPa (10K) lance operating. This condensate included as much as 5 mm deep x 31.75 mm diameter of solid particulate. Sizes of particulate were as large as 1.5 mm in diameter. These are potential vectors for infectious material.

For years, we have been concerned with bacteria as a complication only if one were to get cut by water streams. But we have not seriously considered respiratory routes of entry. If such large and numerous solids can be suspended in mist generated at 10K psi, what else is contained within them? One potential bacteria could be Legion-ella. While Legionnaire’s Disease is widely known, it is only one of 50 species, 60 serogroups, and hundreds of strains of Legionella. During the above referenced work in boilers, 80 to 120 employees worked 12 hour shifts for up to three weeks at a time. Many would fall ill to a flu, up to half the shift on both shifts. This was the norm. One of the forms of Legionella can cause a condition called Pontiac Flu. This presents itself as common flu. Were these employees infected by Legionella? Like so many outbreaks in the past, no connection was made to Legionella, so no testing was done. Should we be screening water sources for Legionella now? What is the likelihood that Legionella is present in the water used in the water jetting industry?

Legionella occurs naturally in water sources. It has been found in all 50 states, but is more common along the Eastern states and the Midwest. It is most highly concentrated in New York, Mary-land, and Illinois. It has been found in fresh, brackish, and salt water. Legionellosis (infection by one of the Legionella types) infects an estimated 75,000 persons a year in the USA. It is not transmitted from one person to another. We will address its particulars by following the common causation model: viable bacteria, amplification, dissemination, transmission, and route of exposure. 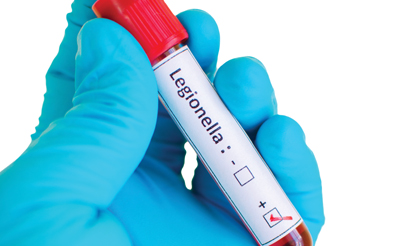 Viable bacteria are found under normal conditions. Its reservoir is water, surface or underground. Legionella is resistant to normal levels of water treatment for potable water. It can lay dormant below 68 F and tolerate pH from 4.5 to 10.5. It can survive for more than 135 days in distilled water and up to a year in tap water. Rubber and some plastics can facilitate growth.

Amplification can occur when temperatures reach 77 F to 120 F. Amplification takes place in a biofilm, which can form in stagnant or slow moving water and resembles a slime. Amplification sites include just about every type of engineered system for holding water, including CPAP machines, vegetable sprayers, body misters, even potting soil and mines.

Dissemination occurs in the water courses and aerosolized droplets. Bacteria do not survive long in suspended mist, but can survive (under ideal conditions) up to one mile from cooling towers. Any activity that can create a mist of contaminated water can carry Legionella to a host. Common sources are waterfalls, fountains, and spraying of water in industrial applications, such as metal cooling fluids. Certainly, water jetting, even pressure washing pressures can aerosolize the Legionella. Bacteria cannot survive drying out. Other limiting factors are low humidity, UV light, temperature, and smog.

Routes of exposure include contact with open wounds from contaminated water directly or through soils. Inhalation and ingestion are the primary routes of entry. It is common for healthy persons to have Legionella antibodies, showing past exposure. There is no consensus on infectious levels, so any detectable amount may cause infection in susceptible hosts. Susceptible hosts have been identified as those with suppressed immune response by disease or by medication, elderly, smokers, premature infants, and persons with COPD or diabetes.

The attack rate (those infected out of the possible susceptible hosts exposed) varies between types. Legionnaire’s Disease has only a five percent attack rate with up to 80 percent mortality. For survivors, long-term health suffers from brain function to joint pain. Other forms, which are less life threatening, have higher attack rates. Pontiac Fever, which presents itself as common flu, has a 95 percent attack rate with a 15 percent mortality rate. Non pneumonia Legionellosis infects heart values and joint replacements.

Some facility owners have recognized that Legionella is a risk and have started monitoring programs. How-ever, results are often turned over to contractors that will do maintenance cleaning without further assistance or guidance. Knowing of the presence of Legionella does not in itself solve the problem. One needs to find sources and engineer or limit the infestation before PPE can truly be effective. While knowing the areas to be cleaned have Legionella, one must be sure the water used in water jetting does not also contain Legionella. Even if the area to be cleaned tests negative for Legionella, one might be shooting contaminated water through the water jetting equipment.

Testing can be lengthy. The Centers for Disease Control in the USA recommends a culture test for Legionella. This is the only accepted test for Legionella in the USA. The culture can take up to two weeks for a final result. In the United Kingdom, the Health and Safety Executive (the UK version of OSHA) uses dip slides. These are similar to our pH paper. They are dipped into the water, then inserted into a tube and allowed to grow at elevated temperatures and can give a reading within 45 minutes. However, their results cannot be verified and are not accepted by the CDC. DNA testing has advanced for detecting Legionella, but is not yet proven itself. To date, culture test method for Legionella is the only CDC recognized method.

Even using the CDC/ISO culture method only shows a snapshot of what is going on in a given system. Since no infectious level of Legionella is known, testing can only tell one about the presence of Legionella. Periodic monitoring should be done to determine if bacteria counts are increasing or decreasing in response to maintenance of water storage systems. OSHA has recommendations in this regard. The relevant section from OSHA’s Technical Manual is shown in Figure 1.

The levels requiring action vary for the source of exposure based on the assumption that some routes or exposure result in a greater dose to the lung. For this reason, humidifiers and similar devices, such as misters and evaporative condensers, which produce an aerosol mist that can be directly inhaled should be controlled to lower levels. Remember that these numbers are only guidelines, and the goal is zero detectable Legionella in a water source. Levels of Legionella equal to or greater than the values in the table constitute a need for action, as described below.
Action 1: Prompt cleaning and/or biocide treatment of the system.
Action 2: Immediate cleaning and/or biocide treatment. Take prompt steps to prevent employee exposure.

These are only guidelines, as no regulations yet exist specific to Legionella. They are however, consistent with UK and Australian levels.

Only advance planning prior to water jetting work would allow accurate testing of water sources. In regular maintenance outages with water jetting, the use of fire hydrants to supply water is common. Water sources from fire hydrants could be tested when scheduling occurs and give enough time for results and remediation to be done. This action, of course, would need to be done in cooperation of both the facility owner and contractor. For mobile crews that supply their own water and transport it to work sites, testing can be accomplished well in advance of mobilization. Of particular note is that Legionella does not amplify (grow) outside of biofilm. As long as biofilm does not form, Legionella cannot increase in count. Maintaining water storage systems free from biofilm prevents spreading Legionella. Regular monitoring can make one aware of biofilm forming within the water system.

The water jetting industry may have already undergone multiple outbreaks of Legionella in the form of Pontiac Fever and other non-pneumonia Legionella forms. The reliance of 3 micron filters to ensure water cleanliness has no bearing on Legionella. The prevalent use of fire hydrant water, a stagnant and untreated water storage system, can harbor biofilm and a reservoir for Legionella. The nature of the work often results in weaker immune systems from long hours, shortened rest, and reduced food intake on long outages. Water jetting equipment produces large quantities of mist. These factors make any water source with Legionella a hazard.

While general water jetting PPE augmented with a minimum of half mask respirator using HEPA filters with R or P 100 pre-filters changed each shift is certainly called for, any presence of slime or biofilm around pumps or hoses should be collected by swab for testing. Sampling should be carried out by a Certified Industrial Hygienist or persons trained by them. Without routine monitoring of water used in water jetting equipment, we don’t know what’s in the water.

• Diane Miskowski, MPH of EMSL Analytical of Cinnimonson, NJ for her substantial work in this field and generous sharing of information through written material and seminars.
• Frank Messana, DO, MRO, CIME of Comprehensive Care in Gary, IN for his support and reference in this paper.

• Attack Rate—Those infected out of all susceptible hosts that were exposed
• Amplification—Growing in numbers
• Dissemination—Dispersedor spread out
• Routes of Exposure—four primary routes of exposure are inhalation (breathing something into the lungs), ingestion (swallowing something), skin absorption (passing through the skin without damage and getting into the cells or blood stream), and injection (tearing a whole in the skin and leaving material inside the body)
• Vector—The vehicle that transmits the disease-causing organism from the reservoir to the host