It may not be a one and only, but a unique cleaning job is always memorable and sometimes extraordinary, even exhilarating. Almost every contractor has a project that leaps to mind when the topic turns to special endeavors that will not be soon forgotten.

Some of those endeavors begin in the typical way. “A woman called our office to say she had a flood in her basement several months before, and it was now foul smelling,” says Jean Hamerman, an associate of  Frank Petrullo, the Owner of Enviro-care Air Quality Restoration, LLC in Jefferson Valley, NY.

“The woman’s children were playing in the basement, and she was concerned,” explains Hamerman. So Petrullo visited the home, where he discovered something surprising. “The flooring of the basement was artificial grass carpet,” says Hamerman. “Growing in the carpet were more than 100, six-inch mushrooms. There was mold on the base molding, dry wall, and ceiling.” Petrullo’s company went to work. “We were able to remediate the area and restore the woman’s healthy home,” says Hamerman.

The mushrooms should also provide a good reminder to all about the value of being proactive. “If your home gets flooded, it is important to get a professional to dry out the area immediately to prevent mold from growing and impacting your family’s health,” says Hamerman.

As it happens, a related substrate, artificial turf, comes to mind when Ray Burke, Owner of Spray Wash Exterior Cleaning in Tallahassee, FL, recalls some unique projects he has completed. “It was an artificial putting green in a luxury neighborhood,” he explains. “It cleaned up beautifully and saved the neighborhood considerable money in replacement cost.”

How did Burke’s company clean the artificial turf? “We used a 20 percent bleach solution and Green Wash from SoftWash Systems as our surfactant,” he says. “It was applied and dwelled for roughly an hour. The moss and algae mat on the artificial green was literally one-quarter to one-half inch thick in some areas. It took several applications to kill the growth.”

“Trial and error revealed the best approach to cleaning the artificial turf,” says Burke. “Finally, we settled on using our booster pump to rinse, which pushed water at nine to 10 gpm, but at only 150 psi. We didn’t want to rip or damage the artificial green with pressure, and we brushed a lot of the heavy sediment off the green with push brooms and shovels.”

“For all the cleaning jobs that take place at ground level or below, there’s something exhilarating about heights,” says Burke. After using a crane to clean a church, he got “hooked on heights.” During his first experience working from a crane, Burke learned something about cost centers. “A good crane operator is a very valuable asset to have on your team,” he explains. “His skill behind the controls cut our wash time down dramatically. It was almost like he could sense where I needed to be regarding basket placement.”

The cost-benefit of hiring a crane operator may make the investment—$150 to $275 per hour for a crane rental—the optimal choice. “Even when smaller, drivable lifts will suffice, I prefer a crane if the dollars make sense,” says Burke. “A good operator will actually save you a ton of time.”

Then, too, sometimes a lift is just not an option, and a crane is a must. That itself can be quite a challenge. Patrick Clark, the Owner of Precision Pro Wash in Duncan, SC, recently completed a project that demanded a crane. Clark’s company was set to clean an 11-story building, the Spartanburg Marriott. Because the structure had a restaurant on one side and a parking garage on another side, a standard lift could not be used. The configuration included sloping landscaping and pavers surrounding the building.

“We were turned down by a few crane companies because they did not have a crane big enough, and they did not want to risk cracking pavers,” says Clark. “Southern Crane finally agreed to work with us. And we completed the project in 30 hours from three setup positions.”

The versatile crane that Clark’s company used had a 203-ft main boom, 141-ft jib, and 328-ft tip height. It also had a very quick setup, he explains. It could be telescoped out in just eight-and-a-half minutes “We needed every inch of the telescoping ability,” he says. “I liked using the crane,” says Clark. “It sped up the process.” The entire building took fewer than four days to clean. “Team members were quite amenable to working high from a crane,” says Clark. “My lead tech flies airplanes,” he explains. 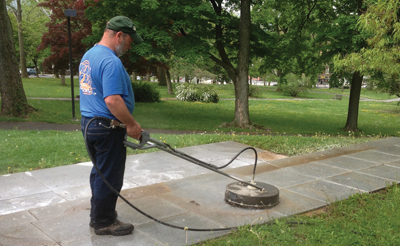 Getting the job done correctly is the goal that guides all successful contractors. Yes, some projects create ‘oh-my’ scenarios surrounding the how. Still, there are many ‘aha’ experiences in any project clear through from the scoping and planning to the doing. Burke speaks of the adrenaline rush he gets when working above ground level. Yet, he emphasizes that each project is tied to all sorts of moments to remember. “I’ve got a ton of other specialty projects under my belt: landfill transfer stations—what a horrible smell—city parks, graffiti removal, and lots of antique, vintage houses/projects.”

Moreover, some of the most exceptional projects in a portfolio are in quiet places, areas intended for reflection. They, too, constitute special jobs. 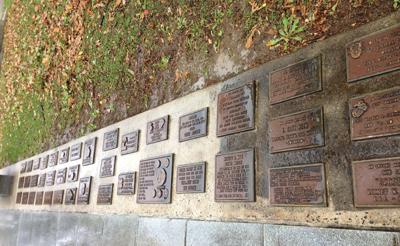 Contemplative spaces often include memorials that remind us of the sacrifices others have made on behalf of our nation. For Terry English, the Owner of Northern Star Power Washing in Blandon, PA, the opportunity to ensure that a memorial got the attention it deserved is one he will always recall. In 2013, English’s company completed a restorative cleaning project for the Vietnam Memorial in Reading, PA. The project was done in two phases (in May and September). 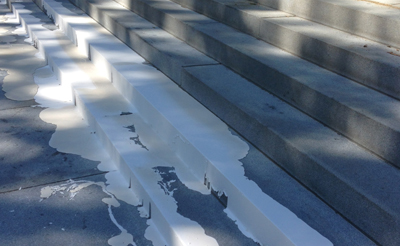 “Phase one consisted of a complete cleaning using my 4000 psi, seven gpm pressure washer,” says English. “A flat surface cleaner was used on the plaza area, which was made up of four-foot square granite blocks. The granite steps were cleaned initially using my pressure washer and wand to remove the general dirt and algae.”

It took a combination of extra effort and expert consultation to tackle the granite. “After pressure washing the steps, I used my wet soda blaster, again at 4000 psi with the temperature set at 180 degrees to remove as much of the surface wax and oil as possible,” says English. But given the stains, there was still more to the first phase of the project—a serious effort to eliminate them.

English explains he consulted an expert, Andy Lewandowski, a granite specialist with decades of experience, who shared a formula for removing stains. “The formula consists of making up a poultice of plaster of Paris and a fast-drying, penetrating solvent to penetrate deep into the pores of the granite and melt the wax and oil,” he says.

The process of removing the stains takes time and patience. “The poultice paste is applied quickly after mixing by pouring it directly onto the areas to be cleaned,” explains English. “It is then allowed to dry completely for about four hours so that the plaster of Paris can ‘draw’ the melted wax and oils up out of the granite.”

After four hours, dried material is scraped away and collected for disposal. The process is repeated three or four times, as needed, explains English. “Once all stains are gone, a final hot water rinse with the pressure washer will remove any remaining material and leave a nicely restored project.”

Phase two of the restoration project involved cleaning and refinishing the 101 bronze plaques. “I cleaned them using my soda blaster to remove all of the old finish,” says English. “After a quick rinse and drying, they were ready to be refinished.” Refinishing the plaques, which took three days, was done manually with a paint brush. After extraneous finish was removed from the raised letters, the plaques were sprayed with a clear enamel coating. Attention to six broken slabs of granite (four-foot square), was the last part of the restoration project. The slabs were replaced and then, polymeric joint sand was put in all the joints in the plaza, explains English.

“The first phase was completed in May 2013 in time for Memorial Day, and the second phase was finished in September 2013 just in time for the 25th anniversary of the memorial,” says English. Hundreds of people visited the memorial when it marked its first 25 years in quiet beauty.