Working with Millennials in the Pressure Washing Industry, Part One

he Definition of a ‘Millennial’

A ‘millennial’ can be loosely defined as any person born between 1980 and 2000. The term was introduced by the media around 1987, when many of these people were entering preschool, which would have them graduating from high school during the millennial year. They are also referred to as ‘Echo Boomers,’ ‘Generation Y,’ ‘Generation We,’ or the ‘Net Generation.’  Some even call them ‘Generation 9/11,’ referring to those who were between the ages of 10 and 20 during the September 11, 2001, attacks on the World Trade Center.

All In The Family

When Paul Horsley with Scotts Pressure Wash in Calgary, Alberta, stepped up to help his father run the family-owned power washing enterprise in the 1980s, it is safe to assume that his dad had an opinion on the ‘Baby Boomers’ generation in the workplace.

“This was a time when computerization and cell phones were revolutionizing industry,” recalls Paul, “and dad and I had different ways of doing business. I will not say that the transition from father to son always went smoothly. Eventually, when he saw that what I was doing was working, he gave up full control of the business. I know that he was proud of what I have accomplished.”

Fast forward four decades, and Paul Horsley is now walking in his father’s footsteps. The difference is that he has not just one but all three of his children working with him, helping to manage a fleet of 25 mobile units operating out of four locations in Western Canada. Just as this successful Baby Boomer once had to learn how to work with the older generation, he now has to adapt to the high expectations of the next generation. Out of his staff of 40 people, 90 percent are millennials.

The consensus across all industries is that millennials in the workplace are demanding and unmotivated. Paul does not share that opinion. “Yes, they have different attitudes, and they make it clear that work/life balance is important to them, but I think they are actually onto something,” explains Paul. “I learned the hard way, after finding myself in the hospital suffering from exhaustion from working seven days a week for nine years straight. My kids, two of whom are millennials, watched that happen, and they won’t let it happen to them! Sure, they want a successful career and the financial rewards that come with it, but they also want to go home to relax at the end the day. That doesn’t mean they are not committed.”

Paul’s daughter, Megan Smiley, agrees that her generation places a high value on home and family life. The 29-year-old is now the Human Resources Manager at Scotts, and she doesn’t apologize for wanting to leave at the end of the day to spend time with her husband. “Millennials are not all lazy,” declares Megan. “We have simply learned that it is important to set boundaries, and we learned that by watching our parents.”

Her 27-year-old sister, Jenna Horsley, an account manager at Scotts, agrees, adding, “There is a negative perception of our generation. Some identify it as a lack of work ethic or drive, but for me, anyway, I just want to have work/life balance.”

Typical millennials, both Megan and Jenna earned university degrees and gained valuable experience working for other employers before joining Scotts. “I have a psychology degree and worked in addictions counseling before starting in the power washing industry,” explains Megan. “I didn’t care for the shift work and the fact that there was absolutely no flexibility to enable me to take an hour off to go to a doctor’s appointment or change the time of my lunch hour for a special occasion. For me, the flexibility offered at a family-owned business is what initially piqued my interest.” 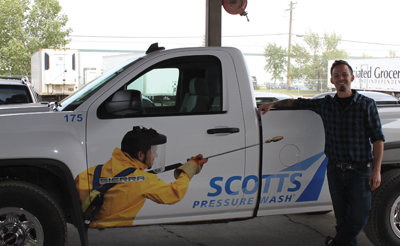 “I feel the same as Megan,” agrees Jenna. “I worked at a company that ‘wrote you up’ if you were two minutes late, based on their strict schedules. I felt that I was an expendable resource. There was almost a lack of humanity. It was really difficult. I didn’t want to work for a company that couldn’t offer flexibility. It was a major factor in my decision to change careers.”

When asked if they felt that the millennial generation was afflicted with ‘affluenza’—a psychological malaise supposedly affecting wealthy young people, symptoms of which include a lack of motivation, feelings of guilt, and a sense of isolation—both young women were firm in their response.

“I resent this negative conception of our generation,” refutes Jenna. “I think a lot of people believe that we have a sense of entitlement, but I believe that every generation is a product of their upbringing. Baby boomer parents were so busy working that they compensated for that with material things. What did that teach the children? This negative label is not our fault. Sure, I care about my health and lifestyle, but I also care about my job. You simply can’t group everyone into this ‘millennial/affluenza’ category. Every generation has something about them that the older generation doesn’t like.”

“I agree with that statement … to a degree,” replies Megan, “I do have lots of friends who work in the oil and gas industry, and they do expect to earn large amounts of money and not work any overtime. But, I also agree with Jenna. If we do suffer from so-called ‘affluenza’, is it our fault?”

One thing that Jenna finds difficult is that the older generation doesn’t give her credit for knowing anything about the power washing industry or having any business acumen. “If I am talking to anyone under the age of 40, everything is fine, but with older people, I have to work extremely hard to get respect. They often assume that I don’t have any idea what I am talking about. It can be challenging. I think that they have disrespect for me because I am both a millennial and a woman in a blue-collar industry. I still haven’t figured out how to deal with it. I just keep trying to learn more and more. If I speak from knowledge, what can they say?”

At age 34, older brother Scott sometimes feels like he is caught in the middle—not a baby boomer but not quite a millennial. He believes that with different work ethics and values based on societal changes, every successive generation is challenged to appreciate the “next” one. “We have to understand that the younger generation craves relationships—they want you to spend more time getting to know them,” claims Scott. “They want you to show an interest in their personal and family life. The older generation wants to put their heads down and get on with it.

“Millennials also have an eagerness to learn and grow,” observes Scott. “Many have an entrepreneurial mindset, and they bring this into the workplace. They have confidence and like having input on processes and decisions with open communication. And they like to be rewarded, though not just financially. This attitude should be viewed as an asset, not ‘affluenza.’ Help feed that desire to be a part of your business and recognize that millennials don’t just want to have a job, but rather they want to feel that they are part of your company.”

Mom Nancy, accounting manager at Scotts, concludes by saying, “The young people we work with—our children included—do have a good work ethic. I would have a hard time comparing them all to the same standard and categorizing them just as ‘millennials.’ The bottom line is they are all individuals. They are all different.”