The History of Pressure Washing: Evolution of an Industry, Part Six

Editor’s Note: This is the sixth in a multi-part series that traces the history of the pressure washing industry from the mid-1970s to present day. An 18-part history series, that covered the early history, was first published in Cleaner Times|IWA beginning in February 1996 and reprinted beginning in March 2007. Those interested in reading the early industry history may view it online at http://cleanertimes.com/artgrp.cfm?fpid=82.

When the pressure washing industry began back in the late 1920s, consumer products were not even remotely in the conversation. It was all about starting a business and making a living. Flash forward to 2014, and you will find them in about 15 percent of American home garages and workshops.

Not that we want to point fingers, but the television industry could be partly to credit (or blame) for the ever-increasing popularity of pressure washers for the consumer market. The proliferation of ‘Do-It-Yourself’ home renovation and improvement TV shows in the last decade has created a continent of consumers eager to tackle ‘DIY’ projects. In addition to knocking down walls, learning to install floor tiles, and a myriad of other projects, people are pressure washing their houses, decks, fences, and more. The TV exposure has resulted in a bit of a power washing revolution and now, for about $150, almost anyone  can be the proud owner of a pressure washer from a big box store. Whether or not the machine can actually clean anything is a whole different story. 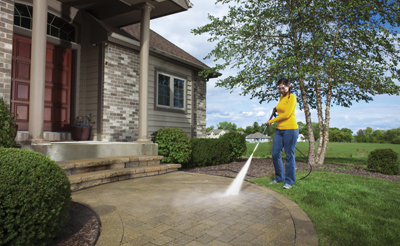 Dennis Black, McHenry Pressure Cleaning Systems, Frederick, MD, recalls that 15 years ago, if he went to a party and someone asked what he did for a living, most people wouldn’t have had a clue what a pressure washer was. “Now, I almost hate to bring it up,” remarks Black with a smile. “Not only do people know what they are, but they often own one. Looking back, the change in the consumer market has been tremendous. When you talk to distributors, you will hear grumbling because of the big box store pricing and competition—and don’t get me wrong—I’ve done my share of complaining, too! But it really has opened up the market and made people aware of pressure washing and some of the environmental concerns that go along with it.”

Tim Layden, CEO, High PSI Ltd., Chicagoland, IL, believes that the one thing that really moved the industry forward was in about 1990, when Excel Manufacturing began selling pressure washers through Sam’s Wholesale Club.

“Bob Williamson, who owned Excel at the time, was one of the first to put power washers in the hands of the public,” remarks Layden. “Now, all the big warehouse stores have them, which takes the big, industrial distributor out of the loop. But people still come to us for repairs, extra hoses, guns, and other add-ons. I think that selling to consumers helped the industry grow because it gave people who would not have bought from industrial retailers access to the equipment. At the time, the cheapest one I had sold for about $1,600. At Sam’s, they were about $400. The homeowner would buy that and eventually progress to a bigger and better machine because the repair bill was often more than the cost of a new one. When they hear that, they will often buy a new one on the spot—from us, not from a big box store. Our prices and model sizes now range for consumers and industrial users alike.”

In order to keep the prices low in today’s fiercely competitive market, many pressure washers being marketed and sold to consumers are produced in high volume. The manufacturers—usually offshore—make everything themselves. There are no outside vendors and no parts and service suppliers. It is all vertically integrated. The cost of labor is the biggest factor deterring North American manufacturers from entering the consumer market in a big way. 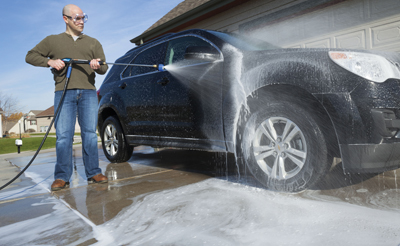 A significant drawback of some foreign-made, consumer models is that they may only have a 50-hour lifecycle and can’t easily (or economically) be repaired. This can be a challenge because owning your own pressure washer is like having a pickup truck. All your neighbors want to borrow it! Units purchased with the anticipation of being ‘low use’ end up being over used, and the machines just aren’t built for it. Non-use can also pose a problem. When units are left sitting for months on end, which is often the case, they can freeze up and become corroded if they are not properly flushed out before storage. The next time that the consumer goes to power it up again, it doesn’t work.

When consumers get fed up with the inefficiency of the inexpensive models, they will often do some research and upgrade to something more powerful. In the long run they pay more, but breakdowns are rare, repairs are possible, and, as importantly, the pressure washer actually washes! This is good news for North American-based manufacturers, parts distributors, and service centers.

Mi-T-M Corporation is one of the premium companies today in both the industrial and consumer marketplace, and they are enjoying unprecedented success because they are focused on producing equipment that is geared for the tasks required, not a low price point.

“We have become a throw-away society when it comes to homeowners buying all sorts of products,” clarifies Karen Anderson, Marketing Manager, Mi-T-M Corporation. “But, most people who purchase our pressure washers for home use view this as a long-term investment. It is not something they want to replace every season. That is one of the reasons why the consumer market has grown for Mi-T-M. We manufacture only industrial-grade pressure washers, but we do have a customer group that caters to the residential customer. This line of light-, medium-, and heavy-duty equipment is midway between what you might find at the big box stores and our industrial-grade equipment. We sell this product into stores like Theissens, Bomgaars, and Ace Hard-ware. We choose not to sell to the big box stores because an important part of our brand is that we stand behind our equipment by ensuring that the retailer can provide follow-up repairs, parts, and service.” 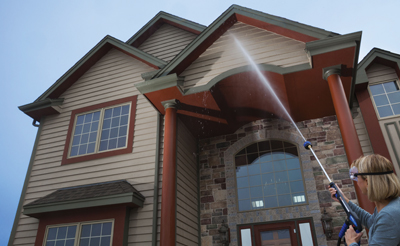 Briggs and Stratton is the number one volume supplier for consumer pressure washers in the gas category. Company representatives Steve Kruger, Director of Brand Marketing, and Eric Loferski, Director of Marketing for portable power and cleaning systems, spoke to Cleaner Times|IWA from their offices in Milwaukee, WI.

“Up until the year 2000, Briggs and Stratton had primarily been an engine supplier to pressure wash equipment manufacturers,” explains Kruger. “Our acquisition of a division of Generac Power Systems of Jefferson, WI, brought the expertise in designing, manufacturing, and marketing pressure washers and portable generators to the company. That knowledge combined with our engine expertise and being the industry’s largest after sales and service support network, gave us a competitive edge in the market. We have now been selling complete pressure washing systems for at least a decade. We have about 50 different SKUs that range from small, electric 1300 psi to 4000 psi gas-powered units. We sell light-, medium-, and heavy-duty units under the Briggs and Stratton and Brute brands, as well as supply major big box retailers through contract manufacturing and licensing, such as Sears, Lowe’s—Troy-Bilt, and Husqvarna.”

“We recognized the growing interest in pressure washers for home use, and we felt the market could grow with proper promotion…and it did!” adds Loferski. “As an integrated engine and end product company, we were able to bring engine and product solutions to the market that benefited consumers in a unique way.”

“Briggs and Stratton worked with retailers such as Sears, Lowe’s, Tractor Supply, and Canadian Tire to advertise more directly to consumers through television ads, in-store merchandising, and improved in-store placement of pressure washers,” explains Kruger. “Awareness was low and the idea of pressure washers for home use was a new concept. Having it on TV demonstrated the value. It lent itself well to that medium, as there is such a clear before and after picture. It really resonated with people. Soon after, our competitors and other retailers also started advertising. Pressure washers soon became the ‘must-have’ tool for guys. We now sell to a number of different e-commerce retailers, club stores, and hardware stores.”

“We still see continued growth over the next three to five years,” states Loferski. “There is significant correlation to pressure washing sales and the continued strength in the housing market. As unemployment rates get lower, people have more disposable income for this type of equipment. First, they buy a lawn mower and trimmer, and then a power washer. The gas-powered market is currently tracking at about 15 percent household penetration and should continue to grow in the foreseeable future.”

If you are a pressure washing contractor reading this article and you are now thinking—“How will this affect my business?”—you can relax. In the long-term, household penetration of pressure washers is believed to be positive for contractors as it brings about awareness of what can be cleaned with water. Not everyone has the time or inclination to tackle a DIY project. Others have tried and failed to do an effective job of pressure washing. Better visibility of pressure washers in general leads these home and business owners to call a professional to do it for them. And that means they are going to call you.

Next Month: We will be examining industry consolidation and the growth of the large corporations. Do you have any pressure washing stories, memories, or photos from 1980 through 2014 that you would like to share with Cleaner Times|IWA readers? Please e-mail terri@terriPERRINink.com to learn how you could be a part of this series.