Any commercial or industrial machine that has the familiar “start” and “stop” pushbuttons almost certainly employs a latching circuit in its operation. Because latching circuits are so common and used in lots of pressure washers, understanding them is a must for the service technician.

Recall that a contactor is a device similar to a solenoid valve. When its coil is energized, the magnetism from the coil causes a plunger to move. In the case of the contactor, the movement of the plunger operates the heavy duty switches in the contactor.

A latching circuit does the following:

~ The contactor can be energized when the trigger gun is squeezed on by means of a flow or pressure switch (“auto-start”).

~ The contactor can be de-energized by any device that can open the latching circuit. Examples of such devices are overload relays, shutdown timers, motor thermal overload sensors, inlet water pressure sensors, and high pressure switches (“auto-shutdown”). 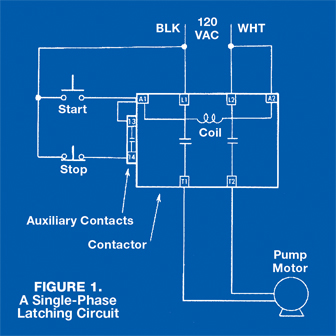 Figure 1 presents a basic latching circuit. The layout shown is for 120 volts, single-phase. A 240 volt, single-phase circuit is identical in appearance. However, there are two differences: The contactor’s magnetic coil must be rated for operation at the same voltage as the power supply, 120 volts, or else 240 volts. In addition, the contactor’s main contacts must be rated to carry the pump motor current. (Remember, a motor draws twice as much current at 120 volts as it does at 240 volts.)

Many contactor manufacturers use the designations A1 and A2 for the terminals that connect power to the magnetic coil. Likewise, many manufacturers use the designations 13 and 14 for the terminals of normally open auxiliary contacts. Auxiliary contacts are operated by the magnetic coil just like the main contacts. The difference is that they’re smaller and lighter duty, not intended to carry the main power flow.

One pathway is via the normally open momentary (spring loaded) “start” switch. When the operator presses the “start” switch, the coil is connected to both sides of the line, and the contactor is energized.

When the operator presses the normally closed momentary (spring loaded) “stop” switch, the connection from A1 to the power line is broken. The coil is de-energized, and the 13–14 contact opens. When the operator removes his thumb from the “stop” button, the contactor remains de-energized because the 13–14 contact is open, breaking one pathway, and the “start” switch is open, breaking the other pathway. 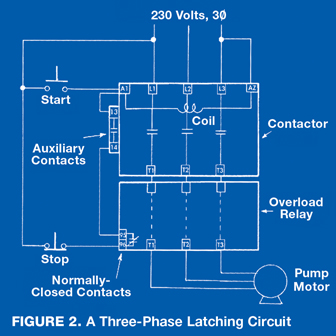 Figure 2 presents the three-phase version of the previous circuit. The only differences are that the contactor switches three power lines instead of two, and the addition of an overload relay.

Single-phase pressure washer motors are usually built with internal overload protectors (the familiar reset button). Three-phase motors aren’t usually built with internal protection. They typically require separate, external protective devices. That’s the job of the overload relay. The layout in Figure 2, where the overload relay attaches to the outgoing terminals of the contactor, is fairly common.

In some European machines, the function of the overload relay is instead performed by an overload sensor that is built into the pump motor. The sensor has a normally closed contact that functions just like the 95–96 connection on the overload relay.

Unlike the single-phase internal motor overload protectors, three-phase overload relays are commonly manufactured with trip current adjustments. Also, as with the A1, A2 and 13-14 terminals on the contactor, the 95–96 designation is not universal. Finally, the incoming power lines in Figure 2 are marked “230 volts, 3w.” The symbol w (Greek letter phi) is widely used to represent the word “phase.”

In the next chapter: more on contactor circuits.