The researches of many commentators have already thrown much darkness on this subject, and it is probable that, if they continue, we shall soon know nothing at all about it.
—Mark Twain

There is no shortage of good textbooks covering electric circuits. However, the “80/20 rule” prevails; probably about 80 percent of the knowledge in these books (or videos/downloads) is of no use in servicing pressure washers. It only serves to hide the valuable 20 percent and discourage the reader with a flood of complicated information.

Having covered the necessary fundamentals of electricity and components in the preceding chapters, we’re now going to tackle electric circuits as related to pressure washers. So fasten your seatbelt, put on your crash helmet, and get ready to roll.

The first item of business is to define the term “electric circuit.” Let’s start with just the word “circuit.” Its common meanings have the connotation of going around something. In early America, the circuit rider was a clergyman who traveled around to preach at various churches. A circuit court judge is one who travels around to hold court in various locations. A race car team may compete in a racing circuit by traveling around to various tracks. 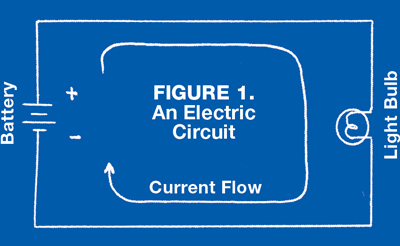 Figure 1 shows a battery powering a light bulb in an electric circuit. Notice that all three required elements are present: a source, a load, and a complete path for the current to flow from the source to/through the load and back to the source. Note: In the symbol for a battery, the end with the longer line represents the positive terminal, and the end with the shorter line represents the negative terminal.

You may have noticed an important difference between current flow and water flow. It’s no problem to let water flow out the end of a hose, say onto the ground or into a bucket. You can’t do that with electric current! No current can flow unless it can travel from a source to a load and back to the source. That’s why birds can sit up there unharmed on a bare electric wire: there is no path for current to flow through them. 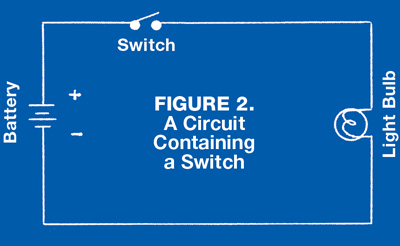 Switches are the most commonly found circuit component. In Figure 2, a switch has been added to the circuit of Figure 1. When the switch is open, it interrupts the path of the electric current.

In Figure 3, a fuse has been added to the circuit. A fuse can be thought of as a form of switch. If too much current flows through the fuse, it melts and opens the current path, just like an open switch. 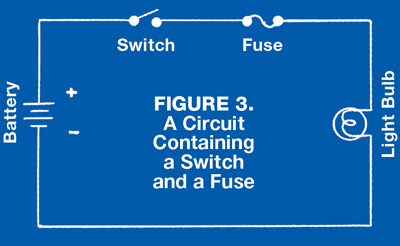 Figure 4 presents a series circuit commonly found in pressure washers. The burner switch, the pressure switch (it could also be a flow switch or a vac switch), the thermostat, and the fuel solenoid valve are all connected in series. 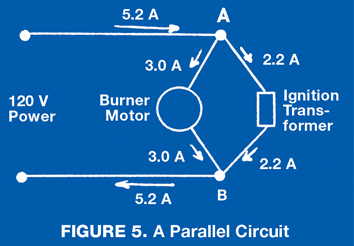 A parallel circuit is one that has more than one path for current to flow. The burner motor and transformer in Figure 5 are connected in parallel. At point “A,” the 5.2 amp incoming current divides into a 3.0 amp current to the motor and a 2.2 amp current to the transformer. At point “B,” the two currents recombine into a 5.2 amp return current. Since the ends of the components are connected together, in a parallel circuit, exactly the same voltage appears across each component. Different currents may flow through each component, but the voltage across all components connected in parallel must be the same.