Editor’s Note: This service technician training series was published previously from September 2008 through June 2014 in Cleaner Times|IWA. It is being republished with the recognition this material is not exhaustive of the subject at hand, but rather to present to new servicepeople an all-important fundamental understanding of how things work.

In order to be a real pro at servicing pressure washers (and get the most enjoyment from your work), you’ve got to understand how they work. As teachers used to say, those of you who already know this part, please bear with us for awhile.

What Is A Pressure Washer?

It’s a device that adds energy to water so that the water can do work.

Consider the ordinary garden hose shown in the Figure 1 sketch. As you know from experience, maximum water flow (say 4 gpm) occurs when the nozzle is wide open. As the nozzle is closed, the flow rate decreases. This is essentially a constant pressure system.

Now take the nozzle off the garden hose and connect the hose to a pressure washer pump as shown in the Figure 2 sketch. The pressure washer pump is being driven at some particular speed by a motor or engine. It is a fixed displacement pump, such as a piston or plunger pump. This means that, within the limits of its design, for a given rpm the pump will move a specific number of gallons per minute—no more, no less. 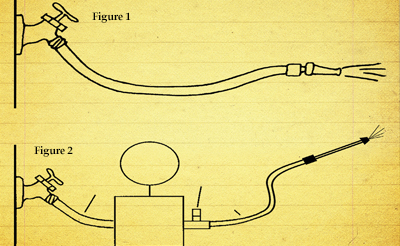 Let us say that the pump delivers four gpm. Unlike the garden hose setup of Figure 1, the pressure washer pump will still deliver four gpm even if five gpm is available from the spigot. Or, if the water output from the spigot is kind of skimpy, it will literally suck on the spigot if need be in an effort to get the four gpm it wants.

Likewise, connecting a hose and nozzle to the pump outlet will not change the four gpm being delivered. It will, however, change the pressure of the water being discharged. The smaller the nozzle orifice, the harder the pump will have to push (higher pressure) to keep the same four gpm flowing. This is a constant flow system. It’s what our industry generally uses to make pressure washers. The more we restrict the output flow, the more horsepower will be required from the motor or engine in order for the pump to maintain the constant flow.

Notice the overpressure relief valve in Figure 2. Should the nozzle become plugged, the constant flow from the pump must go somewhere. Rather than let the pump push until who-knows-what blows, we put in an intentional “weak link,” i.e. the relief valve.

Anyone who uses the rudimentary pressure washer of Figure 2 will notice the inconvenience of the “straight-through” discharge wand. So, the first feature we’ll add is a trigger operated wash gun. However, remember that if we shut off the discharge from the high pressure hose, the pump will insist on trying until something gives to move four gpm down the discharge hose. (The pressure will rise higher and higher as the pump tries to push four gpm down the closed line.)

In order to use a trigger gun, we’re faced with two choices: when the gun is “off” we must either stop the pump or do something else with the water coming out of the pump (divert the flow). Both approaches are used in our industry.

Here too there are two choices: either disengage the pump from its driver or stop the motor/engine that is driving the pump. We can disengage the pump drive on command by means of an electric clutch, like the clutch on an automotive air conditioner compressor. Or, we can stop the electric drive motor on command. (It’s not practical to constantly stop and start an engine.)

Well and good—when we shut off the trigger gun a command disengages or stops the pump drive. Where does this “command” come from? Tune in next month!