Follow the money. By offering cleaning services to customers with a reliable stream of funding, a contractor can establish a healthy and consistent profit. Since school districts are funded by taxes, they have secure financing.

There’s a time-worn adage about entities with deep pockets. And deep pockets are what school districts have. Because most school districts can issue bonds to raise money for construction projects, they have a ready source of revenue when they need it. They do not have to cut back on cleaning services in order to pay for a new roof or chiller.

Moreover, districts receive favorable ratings for the bonds they issue because their sources of funding are so strong (and predictable). Levies on residential and community property bring in a large share of the money districts receive. There’s also state funding, which varies with place, and federal funding.

In many states revenue from sales taxes contributes to public schools, and gambling and lottery revenue gets added to the mix, too. In some places, local districts have been taken over by state governments because they were so poorly run, had insufficient funds from property taxes, or both. As a result, they are usually better funded than the average school district.

A community that seems to have a low economic activity level may still have a robust school district budget. That’s because many states have enacted an equalized funding formula, which in short means that communities that can raise less from property taxes get a boost from state coffers.

On top of all the funding streams that reach districts, there is one more in recent years: Dollars specifically directed to maintain sanitation and ventilation protocols.

The amount of money spent on public education is enormous, and it is increasing. Not only does the education sector have big pockets, but it also has pockets that keep expanding only to be filled with more money.

When educational funding is appropriated and directed in the largest states, it amounts to billions of dollars. In its 2021–2022 budget, the state of Florida appropriated just over $10 billion to finance its equalized funding formula.

The National Center for Education Statistics (NCES) from 2015–2016 capture the significance of school districts as a sector of the economy. In that year there were 98,456 public schools operating in 18,328 school districts across the United States.

Per student expenditures do not vary much. In 2017–2018, according to NCES, the average spent per student was $12,485. Close to 10 percent of that amount goes to operation and maintenance. Cleaning services, which fall into maintenance, can be expected to have a healthy line of funding available.

With so much money circulating in a sector, a company that is not competing for contracts might want to reconsider. Of course, selling to school districts demands a lot up front from a prospective seller.

Even before contractors and distributors get to the line-by-line specifics of a solicitation from school districts, many are wary because they infer they will need additional insurance. As for the insurance, it’s a near certainty they will unless they already have it.

Yet there’s no reason to forgo submitting a response to a request for proposals (RFP) because of the need for insurance. The school district issuing a solicitation will list the insurance requirements for respondents, explains Tom Svrcek, president of CSC Insurance Options and Joseph D. Walters Insurance in Belle Vernon, PA.

With that information, an agency can provide a quote, explains Svrcek. “You can buy after getting the contract.”

Most policies will be written for a minimum of a year, says Svrcek. Although policies could be cancelled before their term ends, he does not recommend cancelling policies. “It could make it more difficult to get a policy again.”

Svrcek speaks with much experience. Since 1978, the Joseph D. Walters agency has offered a program tailored to small companies in the power washing industry. It serves about 4,000 customers in the category with the basics of accident and liability insurance (that can be coupled with options ranging from limited pollution coverage to employment practices liability).

From his vantage Svrcek encourages a can-do attitude among contractors. It’s true, some districts may want all contractors on the job to be bonded and require higher liability limits, but neither requirement is a reason to stay away from bidding. It is all manageable. 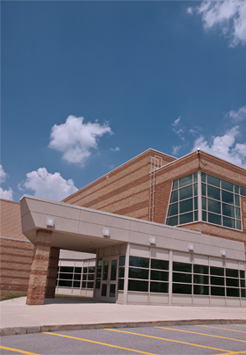 Experienced power washing contractors are well prepared to do the work school districts require. “Generally, they’re no different to clean than other structures,” says Svrcek of schools.

Certain school districts might require special coverage (e.g., abuse and molestation) for contractors who will be working around children, says Svrcek, and some districts require employment practices liability that covers things such as harassment and sexual harassment. Such coverages come at a higher price, he remarks.

True, the district is not the employer of the contractor’s employees, but school districts are wary of being drawn into litigation because of their deep pockets. It’s just a matter of talking with a knowledgeable insurance agent to get the coverages required.

Insurance concerns may be the biggest obstacle that looms when members of our industry weigh selling to school districts. Get over them.

And face the second obstacle: concern about time wasted. It’s true. A contractor may invest time in a response to a district’s solicitation and not get the contract. Often, though, getting that first contract puts the contractor on a path to renewals.

Just consulting public records of awards to verify the investment of uncompensated time can be a good one. Consider the $200,000 that the school district of Lee County, FL, budgeted for pressure washing in the year 2018. Six companies responded. The award was split among four of them and continued for two subsequent years with the option for a three-year renewal after that.

Get a copy of the budget for the local school district and area districts. Assess the way contracts are awarded. Are RFPs issued at a particular time of year or sporadically? Is it possible to get on a list to receive notice of RFPs? (Most certainly, it will be.)

Set up a meeting with the purchasing head for the school district. Have specific questions. Keep it brief and cordial: “I want to introduce myself. My company will be reviewing RFPs because we would like to provide services to the district. Is there a general set of criteria for prospective vendors that the district distributes? Must I register to gain access to RFPs as they become available? Does the district make any purchases that are not put on bid?”

Some districts have a threshold for RFPs. Below a certain amount—e.g., $5000—a purchasing officer may have discretion to get estimates and choose one. A contractor or distributor should ask to be included when no-bid estimates are gathered.

Be aware of parameters for districts, such as cleaning after school hours and on weekends. And be prepared for special requirements, such as going through an onboarding program for vendors if a bid is successful.

Onboarding programs not only give vendors information about how to submit invoices, but they also review protocols for working around children, teachers, etc. The specifics provided in response to an RFP are typically just a prelude to more specifics following an award.

A contractor or distributor cannot overcharge school districts and be successful. But they can adjust charges to incorporate the time invested in attaining contracts and meeting them. The price point can be set a bit higher with school districts than with not-for-profit entities such as many churches.

Be steadfast and realistic. The detail some districts provide in RFPs can be mind-numbing. “Clean windows” would do, but the specifics may be outlined as in “windows will be cleaned of all smudges, stains, fingerprints, etc.”

More and more districts insert requirements about the type of equipment to be used. Expect EPA and CARB emissions standards to apply and be the minimums that must be met by equipment. Expect restrictions on decibel level.

Although it seems every possible variable will be covered in an RFP that is tens of pages long, don’t neglect to get answers to questions that somehow slip through the details. For instance, can a contractor use water available on site? How close can a truck get to the school building? Is there a limit to the number of team members who can be on site at a particular time? Is there a mechanism for adding work that was not listed in the RFP—work because of an emergency or unexpected happening, such as pigeons taking roost and soiling the main portico after it was cleaned.

Schools—like hospitals and churches—are focal points in a community. Never forget that the time invested in getting that first contract selling to a school district will translate into some significant quiet advertising.

Clean trucks with a visible and clear logo, even if working after hours, will get noticed by passersby. Prospective customers will remember the name of the company when they seek services or products.