Most people who work with pressure washers become comfortable with using them and working on them. But comfortable or not, probably more than a few users and mechanics are aware of the hazards associated with the product itself, not to mention using it. Depending on the machine and the application, pressure washers may use gasoline and/or diesel fuel, natural gas or LP-gas, and electricity at various voltages; they have moving parts, produce high pressure water (or perhaps steam), and have engine and burner exhausts. The heating power of a typical commercial pressure washer burner is equivalent to that of a half-dozen or so home furnaces.

Early on CEMA, the Cleaning Equipment Manufacturers Association (predecessor to CETA), recognized the need for some sort of standard, and more than three decades ago they formed a committee to work on one. By January 1983, a 43-page draft had been produced, showing an impressive amount of work.

But the project had a weak spot. The draft standard was put together by people who knew a lot about pressure washers and steam cleaners but had limited knowledge of the broader field of product safety. Additionally, it seems obvious that significant portions of the CEMA draft were cobbled together from a variety of existing standards and sources. And, concerns arose that a product safety standard written by a trade association might be viewed as merely a device to protect manufacturers.

Wanting to head off the possibility of government regulation, in 1986 CEMA contracted with Underwriters Laboratories (UL) to rework the CEMA draft standard. For the then-princely sum of $40,000, UL was to make it into a credible product safety standard to be issued by UL. 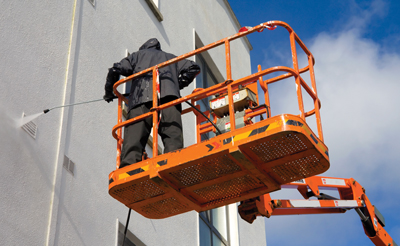 Bud Benson of L&A Products, Chair-man of the CEMA Product Standards Committee, had the task of gathering industry comments to provide to UL. In a March 1987 letter to all CEMA members, shortly before the comment deadline, he began, “It is unbelievable that only one CEMA member has sent me a copy of their critique of the UL 1776, the proposed standard for high pressure cleaning machines.” After a passionate plea for input, he ended with, “Please, if you can’t write, at least call me.”

A trend of indifference was surfacing in the industry, but CEMA-now-become-CETA did try to arouse interest. UL 1776, Standard for Safety, High-Pressure Cleaning Machines, was published as an official UL standard. Meanwhile, in Europe the Cleaning Power Association, a counterpart to CETA and later replaced by the current EUnited association, met twice a year. In an April 1994 CPA meeting held in Amsterdam, Tom Dyskiewicz attended on behalf of CETA, and standards were a topic of discussion. The two organizations agreed to open a dialogue regarding standards, but ongoing cooperation turned out to be minimal.

With only a few exceptions, UL 1776 was largely ignored during its early years, roughly from the late 1980s to the mid-1990s. One of the notable exceptions was the HDS hot water pressure washer, which after a Herculean effort by Kärcher was certified to meet the requirements of UL 1776.

Little by little, awareness of UL 1776 began to spread throughout the pressure washer industry. One small but persistent driving force was those customers who began to insist that a machine be certified to UL 1776, sometimes forced by local requirements. Then OSHA entered the picture by mandating that any electric pressure washer used by an employee must be certified to UL 1776 by an OSHA-designated Nation-ally Recognized Testing Laboratory.

Broad acceptance was slow in coming. As pressure washer manufacturers began to incorporate various requirements of UL 1776 into their designs, a few difficulties arose, causing a mild backlash from distributors and users. An infamous example is the GFCI required at the plug end of a machine’s electric cord. The GFCIs tended to trip and needed to be reset with a highly annoying frequency. There were two sources of this problem. One source is that early GFCIs were indeed much more prone to nuisance tripping than later versions. The other source is that pressure washer manufacturers didn’t realize how electrically “leaky” their machines were. The GFCI trips if more than 6/1000 of an ampere of electricity can leak through a person who touches the machine. All it takes is a little moisture in, say, a burner motor to trip a GFCI. As pressure washer manufacturers learned how to design better electrical systems, the problem slowly went away. Meanwhile, quite a few burner motors had to get dried out in order for their machines to work, and it was common for a pressure washer mechanic on a service call to find that a machine’s GFCI had been cut off and replaced by an ordinary plug.

UL 1776 is now widely known, and its design requirements are found on many, if not most, pressure washers, even if the machines aren’t certified to UL 1776. That’s probably because manufacturers try to stay on a par with each other, so a maker of non-certified machines often employs design techniques found on certified machines.

But apathy, combined with everyone’s busy schedules, has kept industry input to UL 1776 minimal to this day. According to a UL staffer, “You can see it happening…UL does not see any flaws in UL 1776 since there are no outstanding negative comments from industry.” Revisions have been requested by our industry and made since the first version of the standard, but the fundamental problem is that they’ve been “Band Aids,” typically directed at a specific problem someone got tired of dealing with.

A new blip on the radar for UL 1776 is the fact that it’s a U.S.-only standard. In today’s world, more and more pressure washer manufacturers are importing, exporting, or both. That can mean major headaches for those manufacturers, because their products have to meet different requirements for different markets.

The International Electrotechnical Commission (IEC) dates back to a 1904 meeting in St. Louis. The meeting report stated, “…steps should be taken to secure the cooperation of the technical societies of the world, by the appointment of a representative Commission to consider the question of the standardization of the nomenclature and ratings of electrical apparatus and machinery.” As a result, the IEC was officially founded in June 1906, in London, England.

Over the following years, U.S. industries bided their time while the IEC worked hard to spread its tentacles around the world, developing standards presented as “international.” U.S. manufacturers and trade associations were slow to realize that IEC standards were spreading around the world, leaving the U.S. as an island with our own standards. The U.S. electrical apparatus industry was one of the first to recognize the significance of this development, and they quickly got involved in IEC standards development activities. (If you can’t fight ‘em, you gotta join ‘em.) Now, the National Electrical Manufacturers Association (NEMA) spends several million dollars a year on standards development activities, much of it in the IEC. One by one over the years, other industries have had the same awakening and become knowledgeable about IEC standards, if not involved in writing them.

Europeans were quick to see the business-related benefits of standards. They developed an early position of strength in the IEC and its committees. (The IEC is headquartered in Geneva, Switzerland.) As the U.S., Canada, Mexico, and South American countries become more involved in the IEC and its committees, IEC standards seem to be taking on a more truly international nature.

The standard IEC 60335-2-79 first appeared on the scene in the mid-1990s. It is the international standard for pressure washers, and in spite of the “Electrical” in the IEC name, it does cover engine-driven products as well. Like other IEC standards, 60335-2-79 is becoming a passport into various countries.

Editor’s Note: This is Part I of an article on UL 1776 and its importance for the pressure washing industry. Part II of this article will appear in the March 2014 issue of Cleaner Times | IWA and will cover the future of UL 1776 and how the U.S. pressure washer industry is adapting to the IEC.