Part of the Industry Since Its Infancy: 2018 CETA Lifetime Achievement Award Winner

Roger Walz, a 2018 CETA Lifetime Achievement Award winner, has been part of the pressure washing industry since its infancy. After graduating from high school in Clay County, SD, Walz intended to go to the University of South Dakota, but the opportunity came up to work at Electro-Magic as a welder. “I was making steam cleaner chassis and moved up to piecework. Things developed so that at the age of 22 I became plant superintendent. I worked there in fabrication from 1962 to 1968,” recalls Walz.

When Electro-Magic started talking about moving from South Dakota to Paris, KY, which eventually happened in the mid-80s, Walz elected to go into farming since he was not planning on making that move. He explains, “I wasn’t going to Kentucky, so I started a farming venture and farmed for about seven years.” He notes wryly, “But I got in trouble feeding cattle—I had too many cattle and sold them too cheap. One day I saw the general manager at Alkota, who had been at Electro-Magic, and he said he was looking for someone to take over the shop duties at Alcester. I said, ‘Well, I’m having difficulties with the farm right now,’ so I started working in Alcester in 1974, and I’ve been there ever since.”

Walz shares, “I was plant manager working in production and basically was working in engineering at the same time.” And, when the University of South Dakota closed its engineering department, a former engineering professor, Lloyd Zable, came to work at Alkota. “He became my mentor for several years until he retired, and he taught me a lot,” says Walz. After seven employees from Electro-Magic purchased Alkota in 1983 and brought their plant supervisor, Walz continued as engineering manager. This on-the-job engineering training has enabled Walz to help develop improvements to pressure washer design that have benefited the entire industry.

Gary Scott, president of Alkota, states, “In my opinion, Roger has had as much influence on the current design of pressure washers as anyone who has worked in this industry.” 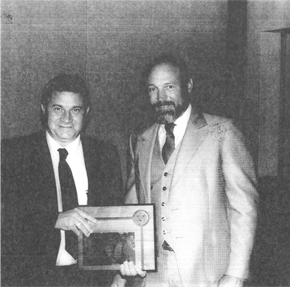 According to Walz, one of the biggest challenges to overcome was with the 12-volt igniter system. Scott relates, “When the 12-volt burner for gasoline engine drive pressure washers was in its infancy, there was a high percentage of failures to the 12-volt igniters. Roger Walz and Jay Hallaway helped Custom Coils, in Alcester, SD, develop a reliable 12-volt igniter that became the standard in the industry.”

Walz shares, “We worked to get a bigger 20-amp charging system so it could be used with bigger burners.”

Another significant improvement was the use of a higher motor speed. According to Scott, “Roger led the industry in using 3450 rpm electric motors to increase flows and pressures of pressure washers.”

Walz explains, “In years past, most units pumped two gallons per minute at 1000 psi using a 1.5 hp motor with a 20 amp/115-volt power supply. We looked at different motor speeds and were able to go from a 1725 rpm motor to a 3450 rpm motor using pulley arrangements to decrease the amount of input required. A 2.3 hp motor using the same 20-amp/115-volt household current was able to pump two gallons per minute at 1600 psi. Then we developed more 3450 rpm motors, and now pretty much everyone in the industry is using that 115-service factor. I worked with several motor manufacturers to get that done.”

Pressure washers have multiple components, so it takes coordination within the industry to move forward. Scott notes, “Roger has helped design high pressure pumps and insisted on certain construction before Alkota would consider using them in the building of equipment.”

Scott adds, “Roger helped develop more efficient oil burners to increase the efficiency of pressure washers. I hazard a guess that Roger is the top combustion expert in our industry.

During his time at Alkota, Walz has also been involved in his local community. “My wife, Avis, and I have been married for 57 years and have three sons and five grandchildren,” says Walz. “I was mayor of Alcester for 20 years, and we accomplished getting rural water into the city and getting new sewer systems during that time.” 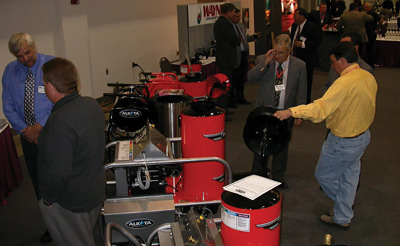 At 79, Walz is still working but at a more relaxed pace. “I’m down to part time,” he relates, “and I provide customer assistance. We don’t turn down anything, so we do a lot of special orders.”

Reflecting back on the changes he has seen through the years, Walz recalls, “When we started, steam cleaners were the main priority. Then the industry started with 2–3 gpm cold water pressure washers with Meyers pumps and from that got into heated water. Equipment has gone from one gpm, 100 psi steam cleaners to 65 gpm at 4000–5000 psi. There’s no comparison—going from 1/3 hp electric motors to 165 hp John Deere diesel engines. It’s a whole different game.”

That new game is thanks to men such as Walz spending many hours working on how to develop pressure washers into the most useful tool possible. Walz has also been successful at working with people along the way. Jeffrey Burros, Vice President of sales and marketing for Alkota, states, “I find it an honor to be associated with Roger Walz. I’ve had the pleasure of working with Roger for the past 17 years. Roger always amazes me with his dedication and his knowledge of pressure washers and steam cleaners. I enjoy him personally for always being cheerful and willing to help the Alkota sales team.”

Scott shares, “For 35 years, it has been a pleasure to work with Roger. He always has a smile on his face and a kind word for everyone. He is one of the ‘good guys’ in this industry.” The respect of those who know you and those who know your work is an excellent return on the investment of a lifetime in the industry.