Sir Humphry Davy gave sodium (atomic number 11 on the periodic table) its name because he isolated it from caustic soda. In nature, sodium exists only in combination with other elements, such as chlorine (atomic number 17).

From table salt to horse/cow licks, sodium chloride is quite a lure to palates. Sodium chloride can also be deployed in large quantities to tackle ice like few other economically feasible and abundant compounds can.

Steel bridges and concrete pavement may be safer in the short-term because of the application of briny mixtures. Over time, though, ions of chlorine (and other stabilizers of
sodium in compound form) can get loose and begin reacting with the substrate.

One example of what can happen when chorine ions get going is pitting corrosion. To prevent pitting, many types of coatings have been developed to protect steel. Uneven coatings or damaged coatings can provide access points for damaging ions. Industry approaches to protecting steel from salts begin with adjustments to its composition.

When the relative humidity reaches 100 percent, structural steel can corrode without any assistance from damaging ions. That’s the (very) short of it for structural steel.

Salt also damages concrete, wood, and composite surfaces. Some environments put surfaces at more risk than others. The array of surfaces that are subject to salt buildup includes shoreside homes, automobiles, trucks, boats, and planes as well as bridges and roads.

Members of our industry work with partners in other industries to bolster defenses to the ill effects of salt. Removing salt buildup works alongside coatings developed to resist the forces of ions set loose from salts.

Linda Chambers, brand and sales manager at Georgia Chemical Equipment (GCE) in Norcross, GA, reminds us just how potentially dangerous salt buildup can be. “Salt can build up on vehicle brake systems—rotors and calipers—and can interfere with proper braking,” she explains.

Surface-specific solutions are provided by Chambers’ company, and she gives us two examples.

“Our Neutra Salt is an acid wash product used to remove winter road salt from the vehicle’s surface and undercarriage,” says Chambers. “For boats you can use a citric acid or something like our O Silver that was made for aluminum detailing but also works to get salts off metal and fiberglass hulls.”

Cost-effectiveness points to timely and correct removal of salt buildup. It’s not just about corrosion.

“Corrosion is the primary issue, but that corrosive effect can take time to show itself and decrease the useful life of equipment,” says Joseph Daniel, CEO of ITD Chemical LLC in Tucker, GA. “The minimal cost of managing this issue upfront is often ignored to the long-term and expensive detriment of the equipment.”

Daniel’s company offers a range of products that can counter buildup across surfaces—yes, the shoreside home, the automobile, truck, boat and more. “Neutra Salt EFD is our best seller and is focused on salt neutralization of the undercarriage of over-the-road trucks,” he explains. “It is safe, environmentally friendly, and easy to use.” 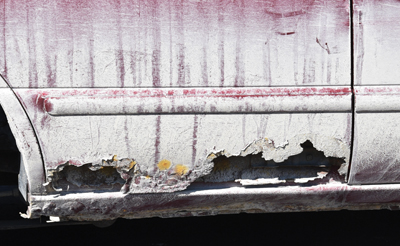 In the most severe icing conditions, however, it’s sodium chloride brines that are used. When the surfaces are bridges and highways winding through the mountains, serious melting agents are required. Cinders, ash, and sand just cannot measure up to salt when combatting ice.

The chemical powers of sodium and of chlorine are amazing in themselves. Used as a reducing element in the chemical industry, sodium plays an enormous role in the manufacture of products that improve lives. Readers are quite aware of the disinfectant powers of chlorine and chlorine bleach (a solution of sodium hypochlorite).

Together sodium and chlorine produce a salt that is hard to beat as a deicer. Striking a balance between the necessary use of sodium chloride (and other salts) and doing no harm is the goal of structural scientists and others across industries.

Termites, carpenter bees, and the like may get lots of the credit for damage to wooden buildings, but salt also causes problems.

Sulphates are an atmospheric pollutant and in certain conditions produce what environmentalists label acid rain. If enough sulphates rain down on wooden structures, they can accumulate and crystalize. The crystals can invade the wood fibers and, if they accumulate in sufficient size, can lead to structural damage.

Buildings near the ocean are constantly exposed to salt. Maritime structures exhibit the effects of salt contact in the frayed appearance of wooden surfaces. Sea salts, such as sodium chloride, do not seem to penetrate the wood the way atmospheric sulfates do. In fact, they may act as a preservative.

Today timbers are harvested from brackish waters with low oxygen more than one hundred years after they became submerged. Excellent condition allows them to be used as saw logs.

Salts have a way of moving when they are dissolved in water. Concrete and masonry are subject to efflorescence, i.e., movement to the surface of salts carried by water. The often white and powdery residue on the surfaces of concrete and masonry structures indicates that water is coursing through. That’s generally a bigger concern than the aesthetic one.

There’s a great deal of debate about whether hydrophobic sealers are a solution to efflorescence or only to the symptom of a greater problem. If water is somehow seeping into a building, getting behind walls, and dripping into walls from roof damage, the structural damage in the building must be attended to as a priority.

Contractors may be called by a homeowner who believes efflorescence is mold. Usually, it’s easy for contractors to distinguish between efflorescence (white, powdery, and uniform) and mold (green, brown, black, and spotty). Scrape off some efflorescence and try to dissolve it in water; if it dissolves, it’s not mold. (Don’t forget PPE.)

A contractor can provide a cleaning and removal remedy for the mold and also recommend the owner consult someone about structural integrity. On concrete and masonry surfaces, mold itself can be an indicator of a breach in the walls or roof and water leakage.

One clue to water damage leading to mold is the location of the mold. On vinyl-sided homes, for instance, mold is generally found where exposure is shaded, north-facing, and extra humid at the microenvironment level. If a brick house exhibits mold on a side that is exposed to sun, the problems could be stemming from a water breach.

More than one driver has had a nasty surprise when some rebar from an interstate highway paving project protruded above the lane’s surface. Rebar is used to add structural strength to concrete. Carbon-steel reinforcing rods like post-tensioning cable or prestressing wires do reinforce the strength of structures. They also contribute to corrosion.

A crack in concrete provides an entry for salts. Metal corrodes. Or metal may corrode because of internal properties of the concrete, such as steel rebar expanding as it corrodes, which results in cracks. Either way, structural integrity is reduced.

Cleaning and coating bridges and other structures that mesh concrete and steel is a vital part of maintaining infrastructure. Commercial buildings must not only be cleaned but also be inspected regularly. They are subject to the same sort of break points as bridges, should corrosion occur in a piling or other weight-bearer.

Contract cleaners should never take on the role of a building inspector, but anyone cleaning a commercial building or applying a coating should report any unusual observation (e.g., crack, water seepage) to the owner.

The lexicon of corrosion is quite large and ranges from the familiar crevice corrosion and pitting corrosion to the less well-known filiform corrosion. (There’s also microbial corrosion.) For an excellent summary of types of corrosion, see the document prepared by the Corrosion Engineering Laboratory at NASA: https://corrosion.ksc.nasa.gov/Corrosion/FormsOf.

While members of our industry do their part to deploy and provide products to remove salt buildup, steel manufacturers keep busy developing alloys and coatings that resist intrusion of water and salt. Take weathering steel.

The weathering steel concept hinges on an alloy composition that allows a protective layer of rust to form, the strategy being to prevent further metal loss. All did not go as expected initially and corrosion accelerated in certain environments (maritime, where sodium chloride deicers used).

Removing salt buildup should be part of a contractor’s repertoire. It’s an important service across residential, commercial, and industrial settings.