Significant contributions to the pressure cleaning industry unite the 27 winners of the Lifetime Achievement Award, which the Cleaning Equipment Trade Association (CETA) established in 1995. Ralph L. Notch, the 2015 recipient, exemplifies the combination of professional and personal attributes that make recipients leaders in their industry.

Notch is perhaps most familiar to CETA members for his role in establishing A.R. North America, Inc. in Fridley, MN as the North American representative for Annovi Reverberi S.p.A. in Modena, Italy. That happened in 1989. 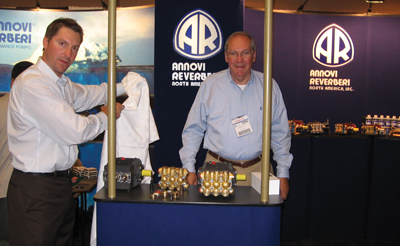 Yet, well before 1989, Notch was deeply involved in the high pressure cleaning industry. For example, after entering the industry in 1966, he first held a leadership position at Hypro Corporation and later a managerial position at General Pump. While serving as vice president of international sales at Hypro, he arranged for the company to distribute diaphragm and plunger pumps from Annovi Reverberi.

Entrepreneurial ventures have also taken Notch beyond the industry. In 1980, he purchased a 30-acre lake resort in Park Rapids, MN. Today, he and his wife Sharon Notch, make their home in Park Rapids.

Notch has retired from his position of CEO and president at A.R. North America. Even so, he influences the day-to-day team effort. The fundamentals he was committed to maintain at the company—honesty, integrity, and industry knowledge—are firmly in place. And his sons, Kyle Notch, president, and Jon Notch, CEO and co-president, acknowledge they have infused their approaches with some of what they learned from their father.

“My father holds a high integrity with employees, customers, and suppliers,” says Jon. “I’ve always admired how he was recognized and looked upon with the relationships he built. I definitely feel the responsibility of maintaining the ‘Notch’ credibility that A.R. North America represents.”

Kyle explains that the “very gentle” and “careful” leadership style of his father was not fully appreciated by him until he himself became a business owner and top manager. “I now realize the importance of my father’s careful sensitivity and positive guidance approach in business,” he says.

“I remember vividly our very first business trip together to the Pacific Northwest,” says Kyle. “I wasn’t an employee yet—just a son, so the lessons and stories on this trip were more father and son than boss and son/employee.” 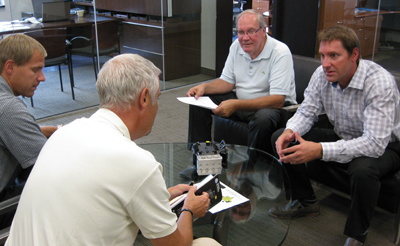 It was in one of those lessons that Kyle learned the significance of hearing what the customer has to say. “I’ll never forget my father telling me the importance of ‘listening to the customer,” says Kyle. “It’s easy to say but to actually be good at it is really hard.”

Ralph Notch has always made it look easy, though. “He has this incredible ability to listen and observe,” says Kyle. “I try to emulate his style every day, especially with employees.”

In fact, says Kyle, the possibility of having both a personal and a professional relationship is possible—and something he also learned from his father. “It was that ‘one day’ on our flight out to the Pacific Northwest that I realized I could build a business relationship with my own father.”

Notch was born and reared in Melrose, MN. His family, which included seven children, had a farm. Melrose is part of Stearns County and lies some 30 miles north-northwest of St. Cloud in the central part of the state. St. Cloud has long been known as a center for metal working and railroad shops. Stearns County is also known for its agricultural endeavors. 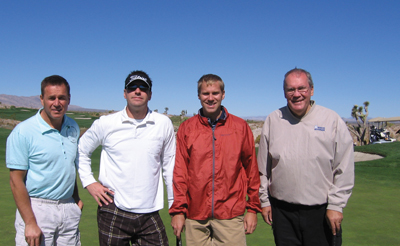 In many ways, Notch’s professional life has incorporated all the vigorous elements of the region where he grew up. His affinity for technological and industrial tools and innovation was buoyed by his keen interest in agriculture, the outdoors, and business. The entrepreneurial spirit he has embodied has been informed by many areas of expertise.

Shortly after graduating from high school, Notch joined the Army where he would work in an intelligence position during the Cuban Missile Crisis in October 1962. After completing military service, he studied horticulture and business at the University of Minnesota.

While attending university, Notch also worked at Norman Jensen, Inc., where he learned much about importing and exporting commodities. His next employer was Pillsbury Company, the place where he and wife met. Ralph and Sharon Notch have been married 50 years.

Guided by his Christian faith, Notch has followed opportunities with the courage to meet difficulties along the way—and to acknowledge at the onset that there are always challenges. For example, in 1980, he decided to take on ownership of the lake resort with four children in tow.

By 1982, Notch had formed the company Insysco, which became the North American distributor for Bertollini Pumps and Meccanica Veneta accessories. And for the next three years, he ran the resort and Insysco. In 1985, Notch was recruited by General Pump, where he became general manager. He was still running the resort, too.

In 1988, Notch decided to make the resort his only commitment, which he did for a short time. But the opportunity to form A.R. North America in 1989 took him back to the industry. A vacant cabin on the resort property became the first location for the company. The company had grown strong enough by 1991 to add a warehouse in St. Paul, MN.

Beginning with just one employee and in modest space, Notch persevered to build the company that exists today. A.R. North America has 45 employees and operates in a 110,000-square-foot facility.

Leading by example is a quiet style of leadership. As such, it’s the results that get noticed more than the process. Of course, when one reflects on the process after the fact, there’s the ‘ah-yes’ moment, realizing what was going on all along.

Notch has always led by example. So much so, that Kyle explains that when he was quite young he did not fully realize just how powerful his father’s approach to leadership was. 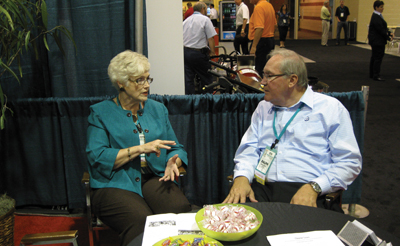 Moreover, says Kyle, the gift that his father has for leadership has been complemented by a talent for communicating. Whether working with suppliers or customers, Notch knew the importance of clarity and thoroughness.

“Our business is built around successful relationships with our Italian factory partnerships,” says Kyle. Suppliers must be treated with as much respect and understanding as customers, he explains.

If ever there was a bit of tension detected with a partner in the business chain, Notch demonstrated by doing how it should be alleviated. It takes “patience” to work through such rough patches, says Kyle. And patience is something Notch has.

Kyle recalls his father illustrating a great mastery of communication. He explains that his father realized the intimate tie between factory supplier and distributor. And he kept that tie strong by fortifying it with well-chosen words.

“I always said about his style that he loved to write long love letters to the factory,” says Kyle. Mutual support and reciprocity make business partnerships thrive.

Notch has always believed that businesses are built by investing in people, say Kyle and Jon. Those whom Notch has influenced across the years often tell Kyle and Jon of the impact their father had on them and their business success. It’s no small feat to gain such admiration from partners and competitors alike, but Notch has done just that.

Recall that when Notch formed A.R. North America, he launched a venture that had established competitors, says Jon. Notch had to work to gain recognition for his brand and to move to a strong footing for meeting competitors. That’s just what he did.

“Watching him build the business on trust, consistency, innovation, and continuous improvement” has been an inspiration, says Jon. Notch showed how to meet challenges as he worked to grow his company.

Through it all, Notch retained his commitment to the industry as a whole. “My father’s vision was simply to help the industry in a positive way while helping his people execute success,” says Kyle.

Overarching all endeavors by Notch is a goal that has never receded. It is “to be the best,” says Jon.