Editor’s Note: This service technician training series was published previously from September 2008 through June 2014 in Cleaner Times|IWA. It is being republished with the recognition this material is not exhaustive of the subject at hand, but rather to present to new servicepeople an all-important fundamental understanding of how things work. Part I of Principles of Pressure Washer Design was republished in the March 2016 issue of Cleaner Times.

Let’s continue with the crude pressure washer we put together last month (Figure 1).

Remember we were about to add a trigger gun to our machine and were faced with two choices: when the gun is shut off, we must either stop the pump or divert the flow of water to somewhere else. We will talk first about stopping the pump.

A “pressure switch” is a common way to obtain a signal to disengage or stop the pump driver. A typical pressure switch consists of a threaded port for connection to the machine’s high pressure line, a piston (with seal), a spring, and a small mechanical switch (microswitch). Water pressure faces one end of the piston, and the spring opposes from the dry end. The dry end of the piston also operates the electric switch. 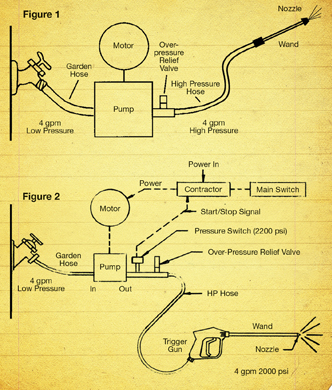 Note: It is hard to make a compact little electric switch that can handle the current for a hefty-size electric motor like the one driving the pump. The way it is usually done is our pressure switch must in turn operate a much larger, automatically-controlled switch (a “contactor”) that actually switches the main power. This way the main power wires don’t have to be routed over to where the pressure switch is mounted.

Like most things in life, the “stop the pump” approach to equipping a pressure washer with a trigger gun has benefits and drawbacks.

Here are some drawbacks. The frequent starting and stopping is stressful because each startup involves a tremendous jolt, both electrical and mechanical. Then too, any small leaks in the high pressure line will cause problems. Why? When the gun is shut off, the pressure builds up until the machine shuts off. But the leak causes the pressure to “bleed off” until the machine comes on, builds up pressure, and shuts off. This cycle repeats as long as there is a leak.

Unfortunately, some customers who have “pressure switch shutoff” machines tend to rely on this feature and don’t bother to shut off the machine’s main off-on switch when they go home for the day. What if a   leak develops when no one’s around? To overcome that possibility requires adding more components. Speaking of leaks, the pressure switch itself can leak—especially the seal. Also, the contactor is an additional—and somewhat expensive—component on the machine.

How does the “stop the pump” approach stack up against other approaches to pressure washer design? Depends on who you ask. It is a proven method, and I think its performance and reliability are fine, provided the manufacturer uses a good design and high-quality components.