Editor’s Note: This entry is a revision of a chapter in the 2002 Power Washer’s Guidebook, “Grain Elevators,” which was written by Merle Flory, Owner, Mr. Porta Mobile Enviro-Wash, Kansas City, KS.

The U.S. grain belt spans an area from eastern South Dakota, Nebraska, and Kansas to western Ohio and encompasses most of Illinois and Indiana. Central Illinois, the heart of the grain belt, is a good location for cleaning grain storage vessels, but there are opportunities across the country and especially near consolidation points, such as terminal elevators along railroad lines or at ports.

There is a lot of variation. Petersburg Power Washing (PPW) does only exterior cleaning, and much of it is for small farmers that typically have clusters of 10–20 silos. Some jobs, however, involve grain storage structures that are six stories tall. Cleaning is done for routine maintenance, for surface preparation, and for clean-up response to a specific incident, such as a grain elevator that is broken. 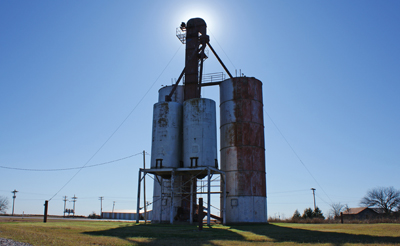 NOTE: Originally, grain elevator referred simply to a structure that elevated grain—kept it off the ground. Yet modern grain elevators do have a pulley-directed system, or leg, for moving grain.

Corrugated steel has become a popular choice—supplanting galvanized metal and concrete in some regions—as building material for silos. The containers used for grain storage, whether bins, tanks, silos, or elevators may have dryers as well as lifting mechanisms.

Safety is the priority irrespective of the configuration of storage containers for grain. Fall protection and tie offs are musts when working high. Access is more complicated when working at grain elevator sites where a series of chutes and tubes link containers. (The configuration is sometimes referred to as an octopus.) In such a setting, getting around each bin to clean requires careful planning. A contractor must understand the entire scope of the job before beginning in order to move equipment and team members in an orderly and safe manner.

PPW has used all kinds of pressure washers in the three years since it added exterior cleaning (and painting) of grain storage containers to its repertoire. Today, it uses Hydro Tek pressure washers and carries 1000 gallons of water on mobile units.

Washing the exterior of a grain storage vessel is not unlike washing the side of a building. Corrugated metal surfaces, in many cases, are easier to tackle than the exterior of buildings. There is not the concern about working around aesthetic flourishes, for example. But, a contractor must worry about the electrical boxes and mechanical components and take all appropriate precautions.

Most storage containers have gravel around the base. Wastewater collection is difficult because typically there is no drain, although some structures do have concrete around the base and a drain. PPW has the capability to capture wastewater when collection is mandated. For now, however, the environmental regulations applied to agricultural areas are quite different from (and more lenient than) those applied to other sectors. (Expect that to change in due course.)

The pressure used will depend on whether the washing is being done strictly for cleaning (remove dust) or it is being done as surface preparation for painting.

Cleaning the inside of grain elevators is a highly specialized endeavor—in a closed container, with special OSHA [Occupational Safety and Health Administration] rules applying. We recall the basics of the cleaning from the original version of this article:

Arrange to inspect the grain elevator with the electrician from the maintenance staff at the elevator. The electrician will know and point out the hot spots. Start at the top of the elevator, and make note of danger areas—such as junction boxes that are not tight, conduit improperly fastened to junction boxes, areas through which water could seep, motors without an electrical cover, power panels, light sockets without bulbs—basically any area where water will be a liability.

Take time to find every light socket, plug-in, knife box, and power panel, and use a razor blade to cut plastic to cover everything that even looks like it may use or have electricity. Do not simply trust what appears to be sealed. Go the extra mile and seal off all power boxes and all power panels. Take all the time needed in the prep work. The prep work is the most vital part of this job.

Start cleaning a grain elevator at the top because the water is going all the way down through the elevator. Because the dust that clings to the walls soaks up water, it may be hours before water hits the bottom of the boot pit (from which it will have to be pumped out). Once started, it’s best to continue around the clock. Most grain facilities want contractors in and out as quickly as possible—and between harvests.

Agitating the boot pit—with shovel in hand and boots on—can improve the prospects for pumping out the water and grain dust and residue that’s in the mucky solution. Otherwise, there may be bushels and bushels of wet grain that will have to be shoveled out by hand.

Clean the head house floors and all related equipment in there. Clean the chutes, the bins, and whatever there is. Now get on top of the man-lift elevators—this is a little car that goes up and down. Have someone stand on top of the car and another person at the top of the elevator running the controls letting the car down while the person on top of the car does the shaft. The shaft is all around you. [Make sure there is an OSHA safety belt around the cable holding the car and that the operator is tied to the car. Fasten a light above the operator’s head on the cable so he can see. This lights the shaft perfectly and the person on top lets the car down on demand until reaching the bottom.]

Reminder—gasoline-fueled engines cannot be used in or near a grain elevator.

Supplies will include those for sealing off electrical and mechanical components, such as silicone caulking and lots of boards (particularly sheets of plywood, 2x4s, 1x4s, and 2x2s).

For suspended solids from inside a grain elevator, arrange for a sand-trap hauler or some type of a vacuum truck to come in and haul it off. Most grain elevators have thousands of gallons of storage sitting there, which a contractor may be able to pump right into the storage tanks. And they have disposal methods in place. Before accepting a job, however, make sure to agree on logistics.

Exterior work for bins and silos on farms is often obtained via word-of-mouth referrals. The same customers come back approximately twice each year with some coming more often. Prices are set by a simple contractor and farmer negotiation prior to each job. Bigger farms are more likely to have a set maintenance schedule and contract for cleaning.

Safety regulations prescribe how often the inside of grain elevators must be cleaned (according to how much dust can be allowed to accumulate). A contractor set up and established for cleaning the interior of grain elevators can contact insurers of elevators and let the insurers know about their availability and expertise.

Larger farms and elevator sites will often ask for bids. Be sure to understand the configuration of a terminal elevator, etc. before completing the bidding process.

Coupling exterior cleaning and painting of bins and silos is a good tie-in. Hog bins and barns also are good add-on prospects. Many grain elevators are allied with underground tunnels. Cleaning tunnels and equipment used in tunnels may be a good pairing with the elevators.

The interior of a grain elevator poses many challenges. If water gets in the controls of an elevator’s electric car, it might start heading down or it might start heading up. When working on the car, have someone near the breaker box so if there is a short and the car starts heading up or down before the cleaner can get off the top of the car, the breaker can be thrown.

Stay in constant communication with the people in the elevator. It’s not unusual to find uncovered motors and conduits as dust is washed away. Make a note of these and give it to the elevator personnel, letting them know where there is a problem so they can go back in and fix it when it’s clean. Never turn the electricity back on before making a final pass and check of the elevator.

Trash pumps can get stopped up with debris, causing problems. Try to keep the boot pits agitated so the pumps do not clog. (Sometimes this is impossible, as when an errant corncob that did not get chopped gets stuck.) The worst-case scenario is the need to get down in the boot pit with five gallon buckets and shovels, shovel for hours, and lift buckets for 20 feet (a very unpleasant job compounded by unpleasant odor.)

If it has been a long time since the last cleaning, there may be a lot of flies and maggots inside the elevator. In this case, it could be appropriate to fumigate the boot pit 12–24 hours before cleaning begins so insects do not swarm the team—an annoyance and a potential distraction from safe practices.

How to Fix Mistakes

When a grain storage vessel owner calls to say that a section was skipped or some solid waste was left under a chute, go back to the site as quickly as possible to re-do the missed area or carry away the waste. And always walk around the site with the owner to do a final check on the outcome before leaving in order to make a return trip a rarity.