Paul Linton has earned the 2019 Distinguished Service Award for more than 50 years of service in the pressure washing industry, from part time in high school through to retirement. Through the transitions from Landa to C-Tech to Kärcher, Linton contributed to the engineering progress that has kept the industry evolving and responsive to needs.

“My brother Larry started the business in 1967 in Portland, OR, and in the summer when I was in high school, he asked me to come work with him—and that’s how I got my feet in the pressure washing field,” recalls Linton. “I worked there in the summers and learned more about pressure washers and engineering, something I had been interested in since high school. I started putting my engineering education to work.”

Linton feels that one of his most significant contributions was engineering on the hot water pressure washer. “We introduced the PHW in 1980 and changed the design of the heat exchanger,” he relates. “It had a slide-out top so the pump and motor could be easily accessed, making it easier to replace the coil and burner.”

The company had been selling, servicing, and renting Rug Doctor carpet cleaners to commercial companies for years when, according to Linton, “My brother and I came up with the idea to have the company build a smaller unit to rent, and we placed those in supermarkets, carpet stores, hardware stores, and other locations for retail rental. That took off and did very well—they are still around in places like Walmart. We sold that business in 1981, though, since we were getting more into manufacturing pressure washers. After we sold the Rug Doctor rental line, we introduced our own carpet cleaner, Rug Rover, for rental use. 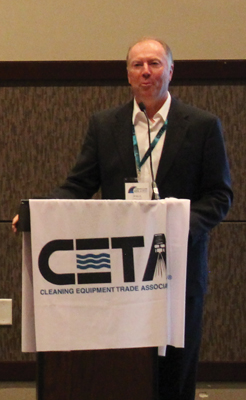 “In 1987, we introduced a significant change to natural gas pressure washers,” says Linton. “We enclosed the entire burner and pump in a cabinet, so it was kept out of the weather and protected.  This was a unique feature in the VNG that others copied.”

Another significant design introduced to the American market in 1987 was the GTO model with a vertical downdraft burner. “This was more like European equipment, but the pump and motor were American made and easy to service,” says Linton. “The GT, GS, and MG models all used the European-style burner assembly. This was more efficient and used less fuel to heat the water, but it was also not as durable. It used a serpentine coil without ‘pancakes’ on the end, so the flame shot down and curved around to exit the chimney. The dual pass by the coil makes it very effective.”

In 1989 Linton was called upon to custom design equipment to respond to the environmentally catastrophic Exxon Valdez oil spill. “Exxon had purchased commercial pressure washers in the spring of 1989 when the tanker first started leaking, but they couldn’t withstand working 24/7 in the harsh environment of Alaska. They called me and asked if I could design a pressure washer to do the job. In two weeks, we had what we called ‘SOS’—Save Our Shores.”

The equipment was needed to wash oil off of the surfaces it was clinging to so it would not spread farther and so it could be collected. Linton explains, “They would wash the rocky shoreline and force oil back into the water, where oil absorbent material called ‘pom-poms’ could capture it for removal to landfills. As ships went through the oil, it would cling to the hull, so the hulls had to be washed to avoid spreading contamination. They washed barges, ships, booms that collected oil, docks, seaplanes—anything that came in contact with the oil.

“Since it was crude oil, it was more like molasses, gooey and sticky,” Linton explains. “We put together a dual coil assembly with two heaters on a large skid unit with a diesel engine and a generator for electrical power for the burners. It had an auxiliary pump to draw in the seawater to then send it to the high-pressure pump and heat exchanger. That way they didn’t need a separate unit to draw water out of the ocean. We had to make sure the pumps could withstand the salinity, though it was not as salty as much other ocean water is due to the glacial melt runoff there, but we still had to coat the equipment with cold galvanizing to hold up. The unit delivered 10 gpm at 2,000 psi and heated water to 200° F.”

The units were a success. “We sent a sample by air freight to their guy ‘Mikey,’ and within a half hour he said, ‘This is the best. Buy it.’  They ordered 101 units, which we built in five weeks and sent on jets to Valdez for cleanup. Exxon later sent us a nice letter complimenting us on the performance of the pressure washers,” relates Linton.

“In response to the EPA clamping down on washing activities in various transportation industries, we introduced Water Maze water reclamation machines,” Linton shares. “The water from washing engines had to be captured and reused or disposed of, so this equipment had clarification, oil/water separation, and filtration using Carbasorb, which adsorbs oil with activated charcoal so it can be disposed of in a chemical landfill. These products are still available,” Linton remarks, “and Water Maze has the largest market share of that product line in the pressure washing industry.” The systems are widely used by the transportation industry, UPS, airlines, and military installations.

“Landa became the largest pressure washer manufacturer, and my brother decided to retire in 1999,” Linton states. Paul Linton was vice president of engineering for Landa and subsequently for C-Tech, which purchased the company at that time. When Kärcher later acquired C-Tech in 2004, Linton continued engineering as manager of special projects and later as manager of research and development.

Though many of those projects have not come to market yet, Linton shares, “We were looking at innovative products such as having a ‘smart machine’ out in the field. We worked on robotics, new types of sound insulation, and more efficient ways of heating—plenty of new, exciting things to develop when time and money are available.”

Linton has observed changes in the industry, with one of the largest being the effect of internet sales. “Cold water gas and electric pressure washers are commercialized so they’re available as a commodity product at major chains instead of just through a dealer. And, in the 1980s we saw the advent of European companies making headway in the U.S. and bringing their products. Many smaller ones didn’t have the product knowledge and distribution system for the U.S., even though they were much bigger worldwide. Kärcher and Nilfisk have been successful here.”

According to Linton, “One of the biggest challenges is being competitively priced. U.S. products dominate this market, but they are too expensive for the world market. Many companies are taking their designs to China and Taiwan for cheaper manpower, since U.S. manufacturers have to outsource some manpower to be competitive. Kärcher has deeper pockets, so they can partner with other companies around the world to produce a good product while being profitable. For smaller American companies, it’s hard to be priced competitively—but they are in tune with the market and have established loyalty with dealers. The U.S. products may be more rugged, as European products often use more plastic.”

Linton anticipates regulations impacting the industry more as compliance becomes increasingly costly. “We have done well with complying with a multitude of regulations imposed by UL, the National Electrical Code, CSA, and so on,” he observes. “Landa was on the cutting edge in compliance, but the standards are becoming stricter and require more engineering. Smaller companies are challenged by the cost of complying for UL listing—it can be tens of thousands of dollars for the right components and testing to confirm compliance to standards. If a company doesn’t comply, it leaves itself open to litigation in product liability lawsuits.”

Looking back at his time in the industry, Linton views the changes as “never one of revolution, just evolution. We were engineering a product that was more durable or had different features in safety, reliability, or efficiency.”

Sprunk states, “The products Paul has designed, the places he has worked, and the influence he has had in and on the industry—including me and all Landa dealers as well as all Kärcher NA pressure washer brands, including Water Maze and CUDA—have been extraordinary and very much appreciated.”

Linton shares, “My biggest success was being able to hire good people who have been successful and moved up in the industry. That’s something I’ve enjoyed very much. In retirement, I miss the association with a lot of good people. You develop relationships with the vendors who sell us pumps, motors, and accessories, and you trust them, and they trust you. I want to give special recognition to the people I worked with in our company over the years. People make the industry, and we’ve had a lot of good people with honesty and integrity.”

Linton is filling his time after retirement with 20 grandkids and a multitude of activities in an active adult retirement community. “I miss the people I worked with,” he comments, but after many years in the Northwest, he also notes, “The sun shines a lot in Arizona!”