Amedeo (Deo) Bove, president of South Plainfield, NJ-based Interstate Power Washing, was still in high school when he launched his business in 1991. He never could have imagined the scope of projects that he would eventually undertake. He and a friend initially started the company by offering residential power washing services. They soon expanded to include truck washing and commercial kitchen exhaust cleaning. Eventually, Bove’s partner sold him his portion of the business and pursued a career in the financial sector, but Bove stuck with power washing and continued to grow the business. He eventually moved away from truck washing because he felt that [in his region] commercial building cleaning was more profitable. (He was right!) 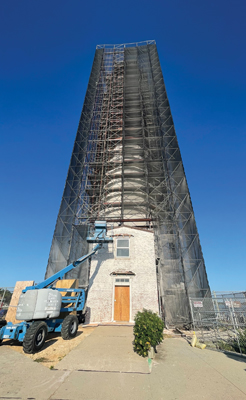 The scaffolding was installed by the incredible team at NJ-based Unique Scaffolding and took a month to install.

“I was fortunate to make the right connections with large restoration companies early on,” recalls Bove. “Over the years, these general contractors helped me get to where I am today. They would hire Interstate to power wash the buildings when they were doing masonry restoration. We started doing public work and got all the necessary certifications and licenses to work on these types of projects. We also completed all the required OSHA training. This separated us from our competition and gave us the ability to do the larger jobs. We expanded our service offerings by adding masonry restoration and waterproofing of buildings, in addition to power washing. It makes sense, when you’re washing a building, to be able to do the repairs needed at the same time.

“Another move that I believe helped me succeed was the purchase of man lifts,” adds Bove. “We now own 10 lifts, ranging from 45 feet to 125 feet in height. When competing against other service providers who don’t own this type of equipment, I feel that we have an advantage, considering that rental prices on lifts are high and will significantly add dollars to the job.”

Today Bove’s company specializes in cleaning, restoration, contracting, and waterproofing services serving mid-size commercial buildings, industrial facilities, and residential properties. With a staff
of more than 30 and a fleet of 15-plus vehicles, their expert crews efficiently and expertly restore façades for any building size. Building cleaning and restoration now represents 80 percent of their business.

Interstate has developed a solid reputation in the Tri-state area (including New York, New Jersey, and Pennsylvania). Because of their proven expertise, they’ve earned the loyalty of hundreds of clients throughout the Northeast. So, it comes as no surprise that they were awarded the coveted (and challenging!) contract to assist with the restoration of one of New Jersey’s most famous landmarks—the Barnegat Lighthouse.

Left image: The wastewater filtering system was created in cooperation with ACR Products.

The Story Behind “Ole Barney”

The quaint little borough of Barnegat Light is located at the northern end of Long Beach Island, NJ, and covers less than one square mile. It has a winter population of about 700 and a summer population of about 1,100, consisting mostly of retirees and former Long Beach Islanders. Fishing is still big business here, just as it was when the English Crown first deeded the area in 1692.

Barnegat Light’s most famous landmark is the red and white-banded Barnegat Lighthouse, affectionately called “Ole Barney.” This 172-foot-tall structure, designed by General George Meade, was commissioned on January 1, 1859. It is the second tallest lighthouse in the United States and stands where Barnegat Bay and the Atlantic Ocean converge. It is one of the signature tourist destinations along the Jersey shore and is listed on the National Register of Historic Places. 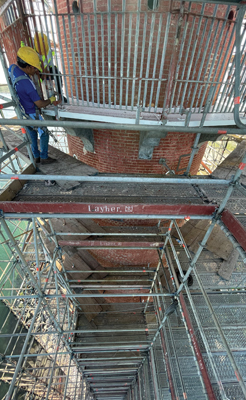 Interstate’s technicians had to overcome any fear of heights, working near the top of the 172-foot-tall lighthouse. But wow! What a fabulous view!

After being decommissioned in 1927, the Barnegat Lighthouse sat dark until 2009, when the Friends of Barnegat Lighthouse donated the current beacon light. It was activated on Jan. 1, 2009—exactly 150 years after the structure’s original lighting in 1859. The lighthouse and surrounding state park still attract thousands of visitors every year.

According to the Department of Environmental Protection’s website, the lighthouse was closed to the public on March 14, 2022, in order to complete the $1.3 million restoration project. Construction will involve a complete exterior restoration, masonry recoating and repairs to the brick façade, interior lantern steel platform repairs, roof repairs, and the installation of new windows. It is expected to be completed in October. Barnegat Lighthouse State Park, along with the park office, interpretive center, fisherman’s walkway, and trails, remained open during this time.

To complete the restoration project, the Friends of Barnegat Lighthouse Society will donate a new beacon light for the lighthouse, as well as new security fencing.

The scope of complete exterior restoration of the Barnegat Lighthouse project was huge. It consisted of removing layers of the decades-old paint, cleaning the existing brick, repairing the masonry, and then painting the 163-year-old structure. The power washing portion of this project alone would take about three months.

Bove believes that, to give a two-toned effect “back in the day,” the top of the lighthouse was unpainted red brick, while the bottom portion was covered in some sort of lime wash or paint to turn the red brick white.

When cleaning historical structures like this one, it is imperative that the water pressure be very low. Bove worked with Garwood, NJ-based Debco Equipment to build a Kärcher pressure washer that would enable the low 400 psi and also get the water to steam temperature for the last step of the three-step cleaning process.

“Due to the proximity to the ocean, we also had to develop a pretty sophisticated wastewater recovery system and reduce the wastewater disposal aspect of this project,” explained Bove. “The challenges were that we had 160-feet of scaffolding that needed to go up around the tower, which added another level of complexity to the task. Our first step was to lay down and level a ¾-inch thick and 25-foot-wide plywood base with wood berms around the entire lighthouse. We then laid a commercial-grade thermoplastic polyolefin (TPO) cover on top of this plywood to create a temporary pool to contain wastewater. The scaffolding was then erected on top of this plywood structure by the skilled crew from Unique Scaffolding, and our plywood structure provided a good solid base.

Left Image: Interstate’s technicians had to overcome any fear of heights, working near the top of the 172-foot-tall lighthouse. But wow! What a fabulous view!
Right Image: Construction of the wastewater recovery pool at the base of the lighthouse.

“A team of four technicians tackled the project—working from the top down and wearing fall arrest equipment in areas where there were gaps in the protective safety railings on the scaffolding,’’ explains Bove. “The captured wastewater was then pumped into a 1,000-gallon holding tank. Our water reclamation system, created in cooperation with ACR Products in Easton, PA, consisted of three separate stainless-steel filters screening to 10, 50, and 100 microns. After being pumped through the tri-filter cleaning system, reclaimed water went back into a 250-gallon water tank for reuse.”

All chemicals used had to be pre- approved for historical applications, including the Dumond® Paint Removal Laminated Paper PRO. This product was a big help, as it assists in the
removal of architectural, industrial, and high-performance paints and coatings in as little as 30 minutes. The first rinse was a cold-water wash, then hot water followed by steam, using fan nozzles in most areas. Bove reports that the stripping took the longest because they could only do one ring at a time. By mid-July, the Interstate team had started the masonry repairs and planned to be done by mid-August.

“We were honored to be able to participate in the restoration and to work in collaboration with Spartan Construction on this important project,” concludes Bove. “Having done this work, we will look at ‘Ole Barney’ with a new sense of appreciation, knowing that our efforts will ensure that this historic landmark can be enjoyed for generations to come.”