A Bigger Role in the Future

Love-in-a-mist is a flower that speaks to “perplexity” (Language of Flowers, Kate Greenaway). Misty eyes, misty memories, and bewilderment are eternally linked to love.

Yet mist, which is comprised of water particles 50 to 100 microns in diameter, is exceptionally functional. It is used in agriculture to promote plant propagation and in lumber drying kilns to temper wood. Mist is used to spread small amounts of mosquito-combatting chemicals into the air and to cool potentially reactive or combustible surfaces.

Mist is not just about function, though. Recreational and entertainment venues create ambiance and special effects with it.

But, what about the pumps behind the mist? Are they defined by their function, or do they differ structurally from a water pump? 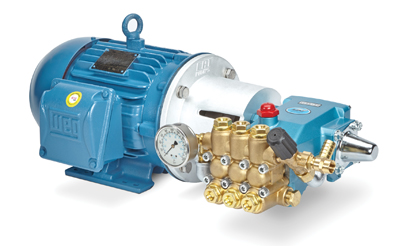 “Structurally speaking, our standard mist pumps don’t differ from our pumps used in other high-pressure applications,” says Joe Campbell, industrial manager at GP Companies Inc. [General Pump] in Mendota Heights, MN. “However, in the case of turbine inlet cooling or other mist systems using highly purified water, it’s preferable to use a pump from our family of products featuring duplex stainless steel wetted parts in order to avoid corrosion and/or fouling of exposed components, such as turbine blading, piping, etc.”

The need for misting pumps is not new. Campbell’s company has been involved in meeting it for many years.

“Our company has been supporting the mist industry worldwide with high pressure pumps and accessories since 1982,” says Campbell. “As of today, our pumps range to flows of 237 gpm and pressures up to 21,750 psi; however, it’s rare to see a misting application higher than 3000 psi.”

Among the many fascinating ways in which misting pumps are used, there is one sphere that particularly interests Campbell. “Overall, I would say the amusement park industry offers the most interesting applications, particularly when pumps are used to create special effects like smoke, fog, etc.”

Matching a misting pump to its setting is part of the task for pump manufacturers. A bit of additional noise around a turbine might not be noticed at all, but in the onboard solarium of a cruise ship, any noise can quickly become an annoyance.

The lowest flow misting pump made by Gustin’s company is 0.25 gpm. “Misting pumps are generally very low flow and pressure,” he explains. “Currently, the trend is to get down to 0.25 gpm.”

There are many reasons the users of misting pumps want to deploy the least amount of water to accomplish the most. In greenhouses, for example, a mist can promote plant propagation by counterbalancing evapotranspiration, the loss of water from the leaves. The idea is to keep the air humidified without putting so much moisture into the area that it becomes a liability (by encouraging mold growth, insect population growth, or other detrimental outcomes).

“Misting pumps are generally scaled down versions of higher flow, higher pressure pumps,” says Gustin. “So, their structure is the same, but the stroke of the piston is not as long.”

Low flow also conserves water. The ratio of liquid water to mist varies with the size of the mist particle. According to a publication from UMass Extension Greenhouse Crops & Floriculture Program, a gallon of water broken into 50-micron droplets (on the small end of the range for mist) yields some 68 million droplets of fog. 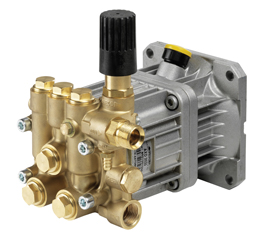 There is no clear demarcation between the size of mist droplets and the size of fog droplets, but fog droplets are generally smaller than 50 microns. Hence, misting pumps may serve the purpose of producing mists or fogs.

Generate any list of the places that misting pumps serve and expect it to lengthen. Mist is proving a viable alternative to chemicals, such as halogenated hydrocarbons, used to cool mechanical areas, particularly on ships. Given the interest in using fewer chemicals and less water to accomplish tasks that keep industries thriving, mist pumps will play a bigger role in the future than they do today.

With the increase in the number of mosquito-borne diseases at temperate latitudes in the United States, there is a great deal of interest in the safety and feasibility of residential misting systems that deliver insecticide. The Environmental Protection Agency has a primer on the subject at www.epa.gov/mosquitocontrol/mosquito-misting-systems. The EPA takes a role in regulating misters used to deliver chemicals.

The regulation of misting systems used to deliver insecticides, including minimum-risk pesticides like plant-derived pyrethrins, is complex. Some states have disallowed them after allowing them, and others have required that warning of the misting and mist additive must be posted.

Mist pumps support a wide range of activities on the residential, commercial, and industrial spectrum. “The ones that strike me as being interesting are in use in the food production industry,” says Chris Schuelke, business development manager at Cat Pumps in Minneapolis, MN.

Schuelke shares an example of a mist pump that his company has installed in service to a food producer. “The most recent and probably the most impressive example would be a high-pressure mist system installed in a large poultry factory,” he says.

“Hot summer days can have devastating effects on chickens, leading to catastrophic losses for the business,” explains Schuelke. “The high-pressure mist system was installed to evaporatively cool the facility, saving thousands of chickens from premature death. With the decreased losses, chicken production grew, and the profitability of the facility increased.”

Schuelke’s company offers brass and stainless-steel pumps for misting, fogging, cooling, and humidity control. Among the substantial list of applications for misting pumps listed at the company’s website is lumber processing.

“In lumber processing, misting is used in both the kiln location and the production facilities where wood products are built,” says Schuelke. “In the kiln—drying—process, high pressure misting is used to control humidity so the lumber can be sold with optimal moisture content. 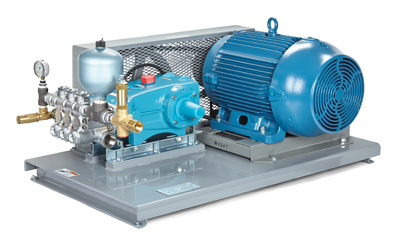 “In facilities where wood products are used for production like furniture, cabinets, guitars, decorations, etc., the humidity needs to be tightly monitored and controlled to ensure consistency and quality of the final product,” continues Schuelke. “High pressure misting is a very fast and efficient way to maintain constant humidity.”

For big jobs, misting pumps often work in concert. Such jobs might be in agricultural settings (e.g., dairy barns, greenhouses) or at mining or quarrying sites.

“It is common to use multiple pump systems for large-scale misting,” says Schuelke. “Configurations like this allow facilities the ability to adapt to current conditions based on demand for cooling or humidification. It gives the flexibility to run just one pump when demand is low or up to all four pumps when demand is high. For example, a facility requiring 5 to 60 gpm, depending on season and time of day, might use four systems each running at 15 gpm.”

The niches that misting pumps serve are wide ranging and cover some territory that pressure washers do not reach. (Think of a misting tent used to humidify the air—and sometimes to deliver the airway relaxant albuterol—for asthmatic children.)  But the pumps behind the mist are not unique.

Misting applications cover such an expanse that some of them are accomplished without powered pumps. At one time or another, most of us have made a mister with a manual pump. Perhaps we wanted to apply a mist laced with soap to the leaves of houseplants withering under attack from wooly aphids to discourage the aphids. Hand-held nebulizers are familiar to many who have severe allergies.

The misting pump is an exceptionally reliable component of the misting process irrespective of setting. Its dependability makes it easier for those configuring misting applications to focus on other components.

There are confounding issues in misting applications. The ancillaries are usually at the root of them. Chemical deposits on nozzles can reduce flow. Fans used to keep mist circulating can be a noise nuisance. Position of nozzles must be well planned to prevent drift of mist, which must be avoided when mist is being used to deliver a chemical, and so on.

Misting is a powerful tool. It is also an environmentally friendly one.

Mist maximizes the benefit of the smallest amount of water, and mist helps to reduce chemical use in two important ways: more efficient dispersion of chemicals, and the ability to suppress—or even extinguish—fires with water instead of chemicals (like atmosphere-altering halon).

Expect the need for misting pumps to grow. Fully expect to be dazzled—not bewildered—by new applications. There’s a lot to love about misting.