Mistakes Made and Lessons Learned

Mistakes Made and Lessons Learned

Experience may not always be the best teacher, but it’s a good teacher. Even a bad experience contains a lesson. In fact, John Cloud, president of Gorilla Kleen in Sarasota, FL, puts it in broader terms.

“Have you ever made a mistake that did not teach you something?’ says Cloud. Point taken.

“I tell people that the reason they can trust my company is that we are large and have been around a long time,” says Cloud. “Hence, we have made a tremendous number of mistakes that we have learned from.”

On the flip side are young companies, which “have not made enough mistakes to have learned the most valuable lessons,” explains Cloud. Of course, even the newest owner endeavors not to err.

One way to avoid errors is to learn from others. Listen to them when they offer that they have been there and done that. (Engaging in professional association meetings allows a great opportunity to do that.)

Cloud instructs his team to evaluate each jobsite before starting a project. “I tell my guys to look out for the things that could provide the worst outcome…” And, to counter those things with a thoroughly considered approach.

Some mistakes are easier to correct than others, says Cloud. “It is a mistake to leave dirt at the end of someone’s driveway so that they track it onto their clean driveway.” But making the outcome right is not difficult and it constitutes a not-so-serious issue.

A much more serious transgression would be to allow bleach to seep into a koi pond, says Cloud. He unfortunately had an experience involving koi and team members wading into the pool to try to save them. It was “a much larger mistake” than a re-soiled driveway.

Situational awareness is key to avoiding errant ends—large and small. Cloud explains how his team caused the negative interaction between koi and bleach.

At the time the incident happened, none of the team members knew about koi what they have learned since. They had not planned to use bleach anywhere near the pool, but the adult son of the owner told them to use bleach on an upper balcony and attested to having done so himself.

“Well, it turns out, koi are surface feeders, so a single drop of bleach hitting the surface evokes a response in the fish to ‘bite’ that water, thinking it is a bug or something edible,” explains Cloud. “They then ingest concentrated bleach onto their gills and their gills get fried, and that is the end of things—all over a few drops.”

A sad outcome for the koi and a lesson learned for the team about koi. “There were no repercussions other than the bill for cleaning and not getting paid,” says Cloud. “And we thought that was a really fair deal.”

In other words, no insurance claim had to be made over the koi. Mistakes can present more than a little issue (like dirt) to be corrected—necessitating a claim—which leads to higher premiums.

Taking the time to analyze each job site as a unique one and following all safety protocols minimizes that possibility of making a mistake. Yet some of the most easily avoided errors continue.

Cloud says that an insurance agent told him the largest mistake measured by insurance payouts is people tripping over hoses of pressure washers. (Trips and falls are high on the incident list across industries.) 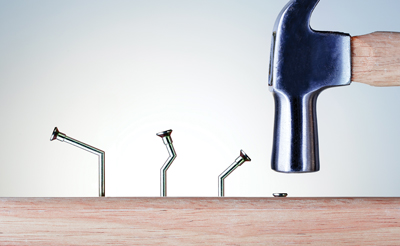 Contractors may be out there every day interacting with the residential, commercial, and industrial customers the industry serves. But every player in the industry is open to learning and learning from things that do not go exactly as planned.

“The best lesson I’ve learned is to keep constant communication with your customers in regards to expectations and outcomes so there are minimal surprises,” says Mike Ralbovsky, a sales representative with Deco Products Inc. in Denver, CO. In other words, be sure that vendor and buyer are talking about the same thing.

To learn from events that we wish had not happened is to grow, explains Ralbovsky. “We see mistakes made in our industry, and if we aren’t working together to resolve them, then how are we growing as an industry?”

Ralbovsky holds a wholly positive outlook about the way our industry identifies issues and resolves them. Top of his list is the way that information is shared among participants.

“The camaraderie, the kindness, the sharing of information, the distributors, the shows and the general sense of productivity we have in this community” make it a great industry, says Ralbovsky. “This industry has made me want to be in business and grow my legacy for future generations.”

Back in the contractor lane, C.L. Scott, owner/operator of Houston Washpros Power Washing in Katy, TX, expresses the same sentiment. Learning from industry colleagues, who are often colleagues and friends, has helped him bypass pitfalls.

“That’s one of the benefits of being in healthy industry groups,” says Scott. “That way you can get ideas on different pieces of equipment, results from different chemicals, view other rig setups, and hear other experiences—to avoid repeating those same mistakes and also to repeat the wins as well.”

Scott tells us of a mistake he made not to repeat. “One time I gave a quote without visiting the site,” he says. “It was two hours away in the middle of a couple of projects.”

And it did not go well. “Long story short, I lost money,” says Scott. “Google Earth isn’t always up to date. Also, you always want to do tests on every job to manage expectations.”

Distance and extra trips—because he did not have the correct equipment and chemicals—added up to the loss for Scott. But it’s a mistake he will not repeat.

Evaluate how things got off course. Learn. Resolve not to repeat.

An openness to learning is a must. Scott laments it sometimes seems as though not everyone wants to learn.

“Everyone isn’t willing to learn, and I see plenty of people go out of business within the first two years of going into business,” says Scott. “It happens for several different reasons, the most avoidable being pride and not asking the right people the right questions.”

Some ill-chosen paths are so well worn that the lessons learned have become the stuff of adages. Take the advice to heart.

Yes, it’s always more time consuming and costly to do something over than it is to do it correctly the first time. A business must realize a profit—promises of payment and possibilities don’t count—so always bill immediately for services or products just as your accountant advises.

And be sure that customers know they are buying a quality product and/or service. In business, it’s not braggadocious to promote your company’s work. But do so without disparaging the work of other companies in any way. Be explicit about what makes your company an excellent choice and leave it at that.

If a prospective customer offers that another company quoted a much lower price, emphasize that the focus should be on quality. Customers are willing to pay for the best. So, strive to be the best.