Try to stay above the waterline when cleaning a boat. Better, clean the boat when it is out of the water or in dry dock.

Good advice. But it’s just a tiny drop in the vast ocean of information about marine cleaning. That would be cleaning vessels (inside and out) of any size, as well as the places where they are stored and moored.

For members of our industry who have stayed away from water-related projects involving boats of any size and navigable water of any kind (broadly, marine cleaning), we recommend a place where a quick immersion can be had, the Maritime Administration of the U.S. Department of Transportation (MARAD). (See https://www.maritime.dot.gov.)

MARAD not only provides layers and layers of information on the U.S. maritime industry but also dispenses an enormous amount of grant money for harbor and marina refurbishment projects, which offer good opportunities for contract cleaners.

The MARAD website also provides a good introduction to vessels and waterways. For example, as of January 15, 2021, the privately-owned, oceangoing, self-propelled fleet of vessels at 1,000 gross tons or more that are U.S.-registered totaled 183 ships.

The U.S. merchant fleet includes containerships (64), dry bulk (5), general cargo (20), Ro-Ro [roll-on, roll-off] (27), vehicles carrier (3) and tanker (64) vessels. (If it seems as though an economically active nation of 330,000 million should have more ships in its registry, recall that more stringent regulatory demands on U.S.-flag ships cause some owners to choose other countries.)

Only 98 of the 183 ships were Jones Act eligible on January 15. To carry cargo between U.S. ports, a ship must meet requirements of the act, which include U.S. registry and a crew of predominantly U.S. citizens. (The Jones Act dates to 1920; it has been waived following catastrophic events such as hurricanes.)

The Marine Highways Program (MHP) falls under the umbrella of MARAD. The program, which was established in 2007 (section 1121 of the Energy Independence and Security Act), seeks to promote utilization of navigable waterways in the United States. (MHP does not run the system.)

Most routes in the MHP are in the eastern half of the nation. Think Mississippi River and its larger tributaries, such as the Ohio and Missouri rivers, as well as the Great Lakes, the St. Lawrence River, and the Atlantic Coast. The MHP reemphasizes transportation routes that flourished for much of the 19th century.

Opportunities for contractors, distributors, and manufacturers in the maritime industry are already enormous. If initiatives like MHP succeed, they will become even greater.

Merchant ships may have their own cleaning crews, but the crews require tools. Galley and mess layout diagrams at the MARAD website feature space for pressure washer wash down systems. (A manufacturer or a distributor sold that system.)

Military vessels, small pleasure craft (approximately 12 million), and even paddle boats must be cleaned. Think creatively to connect with customers—whether they need equipment, services, or both.

“I am on the Gulf Coast, and the Mississippi River is less than one-quarter mile from one of my locations,” says Roy Pennington, owner of Hi Pressure Cleaning Systems Inc., which is headquartered in Houma, LA. That position permits him a unique vantage.

“We currently have a couple of 15,000 psi water blasters on a vessel in the river,” says Pennington. The blasters are being used to clean the bulk carrier holds. “They change cargo, from hauling powdered cement to hauling grain.” The 15,000 psi blasters are also used to blast scale rust off barge decks.

Private owners also rent units, explains Pennington. “We have customers who use two- to four-gallon units that mount in the rafters of their boat shed to clean their recreational boats.”

Customized solutions are in the mix, too. A local business owner “built the house of his dreams on Lake Pontchartrain and wanted to clean his boat before putting it on the boat lift,” says Pennington. “We built a custom four gpm, 2000 psi, cold water unit that fit out of sight and out of mind in the overhead boat lift.”

The overhead lift conceals everything except the small hose reel, gun assembly, and key switch. It has a key to prevent others from using the machine. The unit with auto start/stop was built to be user friendly. “Of course, the buyer’s neighbors saw it, heard about it, and asked ‘Hey, can you build one for me too?’” says Pennington.

Connecting with customers—sales and more sales—begins with listening. “We have a decontamination contractor who came to us with an interesting request,” says Pennington: “’I need to clean a tank inside a vessel, but I can only use diesel to clean with.’”

Customization was successful. “It took a little doing, but we configured a 480-volt, explosion-proof unit to pull diesel from a tank and run at four gpm at 1200 psi,” says Pennington. The customer has returned many times for other equipment.

Unique sums up certain jobs in a way nothing else will. “Several years ago, I got a phone call from a friend that his 45-foot wooden hull diesel-powered cruiser was taking on water and rapidly sinking,” says Pennington. He wanted a centrifugal pump. 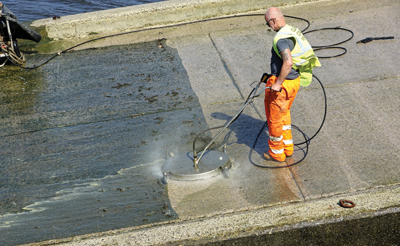 Pennington went on site with a 4 gpm, 3500 psi pressure washer and a venturi-type “sludge sucker pump” attachment. “Bystanders told me, ‘The boat is sinking—we don’t need to wash it. We need to pump it out.’ They were amazed when the package pumped the boat out and kept it afloat.”

It’s not exactly gas if by land and diesel if by sea, but there is a concern about gasoline to take into account. (And electricity. Read on.)

“In the industrial marine environment, pressure washers and water blasters are the go-to equipment to get the job done,” says Pennington. “Four gpm, diesel-powered, 3000 psi units are commonly used because gasoline with its high volatility is frequently not permitted [emphasis on not permitted] in shipyards.”

Electric-powered pressure washers are making their way into shipyards. “Initially there was huge resistance to them because ‘water and electricity don’t mix’ was the perception,” says Pennington. Now “480-volt electric units are more common,” but it took time for adopters to embrace them.

“We provide five gpm, 5000 psi units as rentals with auto start/stop that would stay in the big shipyards for six-plus months at a time,” says Pennington. “They are custom-built with four-point lifting eyes, an aluminum tray on top for guns and hoses, and wheel-mounting that could fit through a 32-inch commercial door.”

Marine cleaning requires as much attention to environmental rules and regulations as any other sort. Federal and state regulators provide guidance on best methods for cleaning vessels.

Contract cleaners should start with state directives. Being able to demonstrate the ability to clean in accordance with best methods recognized by the state will be persuasive to prospective customers.

In Florida, contractors should know the Clean Marina Program (CMP). Marinas can obtain a clean designation by voluntarily demonstrating adherence to recycling, proper disposal of hazardous materials, and provision of sewage pump-out stations.

The Maryland Clean Marina initiative has developed best management practices (BMPs) for hull cleaning. Among them is the practice of not cleaning the entire hull if only part of the hull is dirty.

County governments may have their own recommendations. Some, such as King County, NY, will provide a list of chemicals that should not be used. (For inland lakes, just a little ammonia, chlorine bleach, phosphate, etc., can cause a lot of harm when multiple boat owners use small amounts of chemicals for cleaning.)

Concern about ridding aquatic invasive species (AIS) from boats typically supersedes concern about chemical use. Contractors should know the AIS in the area they serve and be prepared to speak to customers regarding how their cleaning service can eliminate them.

Programs for reducing AIS prescribe disinfection treatments for ballast tanks prior to moving a boat from one body of water to another. Contract cleaners can provide this service along with cleaning.