Hydro-excavation Is a Game Changer

Hydro-excavation Is a Game Changer

Blindfolded and in a new location: The goal is to move around without bumping into or breaking anything. One more obstacle: Movement requires creating a corridor. It’s a dig-to-move situation.

Who confronts anything like the foregoing daily? Companies tasked with maintaining, repairing, and building any part of the vast—and growing—underground network of pipes and cables that keep above-ground communities supplied with water, gas, electricity, and fiber-optic cable and ridded of waste.

Trenching has a long history, and uncovered trenches, such as irrigation canals, can be maintained from the top down. Trenching to reach deeply buried pipes, such as gas lines, brings risks of cave-ins despite expertise and care taken by the crews. It also brings the possibility of cutting into the wrong pipe, causing a gas leak or even a gas explosion.

Two technological advances have made tending essential underground arteries safer and easier. One is ever-better methods for detecting and mapping precisely what the networks look like from an above-ground position. The other is the tool of hydro-excavation. (A bit more about detection methods are in the last section.)

“Before hydro-excavation was common, standard excavators like backhoes were used in conjunction with manual shoveling to locate services,” says Chris Schuelke, the senior product line manager at Hydra-Flex Inc. in Savage, MN. “The risks of damaging utilities with backhoeing or shoveling are much higher than when using hydro-excavation.”

The ease of hydro-excavation versus trenching gets noticed in communities. Repairing a gas line to a residence no longer requires digging up the yard. Instead, a parallel new line can be run and made to go live when the other is cut off.

“The speed with which utilities can be located without damage” is a big plus, explains Schuelke. The utilities include “gas lines, electrical, water, and sewer.”

And back to the homeowners who might otherwise have had to experience their yards being dug up, or imagine several inches or more of snow covering the ground. Or just consider frozen ground. Dirt, snow, and ice in a trench—what a mess, and landscaping ruined on top of it.

“Hydro-excavation has been a game changer for servicing utilities in the northern U.S. and Canada where the ground frost can be several feet deep during winter months,” says Schuelke. “Standard excavators like backhoes can’t efficiently dig in those conditions, whereas hydro-excavators can easily dig through frozen ground.”

Soil conditions change with weather and with geography. Sand, clay, humus rich, and rocky—not all soil types are the same. The goal of industry innovators is to make the tool as precise a match to the soil type as possible. 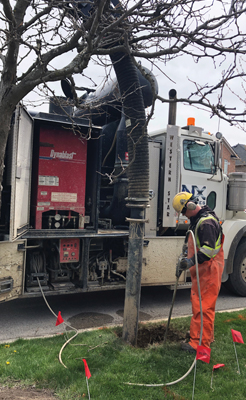 Trench boxes and trench shoring of all kinds immensely improve safety for those who work in or dig trenches. But the safest way to excavate is without putting humans in a trench, and hydro-excavation (also called hydrovac because of the vacuum component involved) makes that possible.

Garth Logan, product manager at Dynablast Equipment (a division of John Brooks Company Limited) in Mississauga, ON, Canada, explains that hydro-excavation merits the label of “the safer way to dig”—definitely so. In lieu of piles of dirt and workers at worrisome depths, water at high pressure loosens a core of soil and the slurry that results gets vacuumed out as quickly as it forms.

Sixty feet deep takes care of most lines in the network of millions of miles of pipes and cable that course the earth below our feet. “A hydrovac truck can dig any shape of hole to a max depth of 60 feet to expose underground utilities for maintenance, digging narrow trenches to install fiber-optic cables, gas pipelines, and other in-ground utilities,” says Logan.

Naturally, locating and tracing the path of utilities (which in this century are carefully mapped as laid out) is the top priority. One method for doing so is potholing. And it’s particularly interesting because the same tool that will do the excavation—the hydro-excavator or hydrovac—is used to pothole.

“The term ‘potholing’ refers to the process of exposing buried facilities by hydrovac vacuum excavation,” explains Logan. “Potholing involves the drilling of exploratory holes—the depth of which spans from ground level to the required extent of the investigation.”

Even with an accurate map of underground networks, potholing may be done. “Potholing confirms the location of utility lines on site and any other existing structures that may be within the defined construction area,” explains Logan.

“Potholing services can enhance project safety, increase productivity, and lower costs as well as risk when exposing buried infrastructure,” says Logan. “This is used in conjunction with a directional boring machine.”

The variables attached to the components used in hydro-excavation go beyond soil type and complexity of underground grid. They extend to the type of conduit.

“A hydrovac operator needs to work within guidelines for which utilities are being exposed,” explains Logan. “A great example is fiber-optic cables or high-pressure gas mains, which can only be exposed using lower water pressure in order not to damage the utility.”

Companies that manufacture tools for hydro-excavation endeavor to continuously improve offerings, of course. They also strive to provide ease of access to everything needed for a project.

“A hot water heater is an important tool on a hydrovac truck,” says Logan. “Hot water allows easier access to penetrate the frozen ground in the winter months and [makes it] easier to dig through clay by creating a slurry to vacuum easier back into the truck.”

And the company has a long history of doing so. “For the past 35 years, our company has been the Canadian distributor for Interpump and Pratissoli water pumps, as well as P.A. SpA accessories such as valves, lances, guns, and nozzles,” says Logan. “With our experience in this industry, we can provide custom hot water heaters and pump package solutions to meet hydrovac OEM requirements, as well as aftermarket support.”

Outer space may be too big a leap, but the subterranean arrays that keep our communities operating are endlessly amazing. So is the inventiveness that goes hand-in-hand with efforts to maintain the arrays.

Second, hydro-excavation can really speed critical processes. When Flint, MI, wanted to do a fast assessment of the type of pipes carrying water to homes, hydro-excavation was the method of choice. Small holes (akin to the potholing method) were made next to each service line in a search for lead pipes (that would eventually have to be replaced) and then were quickly backfilled. 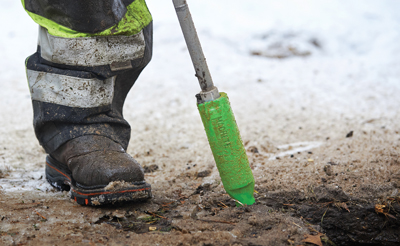 Regarding the detection of all the parts of the underground array, research and development takes many paths. Perfection of ground penetrating radar (GPR) is one possibility. One concept would be to mount the radar on drones that could course an area and produce a map.

On a closer-to-source path is the development of acoustic emitters that can be put into pipes to allow the whereabouts of the pipe to be determined without excavation. (Small video cameras have been in use longer.)

For all the safety precautions and enhancements of equipment, situations still arise where a new gas line gets installed right through a water pipe. That’s a cross bore, and there’s an entire organization dedicated to resolving—preventing—cross-bore events.

The age of water system pipes in some parts of the country—so old some are still made of wood—makes boring through them easy. Easy but not good. The Cross Bore Safety Association (CBSA) works to reduce such incidents and includes in its scope of prevention efforts underground pipes and lines that may not intersect but do abut.

The Common Ground Alliance (CGA) is a group of industry professionals focused on ways to prevent damage to underground infrastructure; it collects and disseminates information on best practices and has done so since 2001. Better coordination or just coordination is one of the themes the alliance sounds.

For example, instead of a sewer replacement project happening one year and a gas-line replacement project the next year, they could be coordinated to happen simultaneously, which would involve less excavating and better alignment. Above all, the alliance promotes better collection, storage, and sharing of data about underground arrays—mapping that would rival the best mapping of above-ground communities.

It’s a win-win situation for all involved.