How to Make the Most of Your Next Trade Show

How to Make the Most of Your Next Trade Show

Editor’s Note: Most trade shows have been canceled in 2020. Keep a record of this article to help your company with trade shows you will hopefully be able to attend in 2021.

Bronze Age traders trekked hither and yon to exchange implements and furs. The proverbial lions and tigers and bears did not stop them four millennia ago. Neither did the need to forge paths across complicated terrain.

The insatiable spirit of humans to move, explore, and learn cannot be suppressed. And the (largely enforced) stasis that so far defines 2020 will end.

When the bustle returns—at airports, in hotel lobbies, and on city streets—trade shows will be in the mix. They will likely be more popular than ever. Be prepared.

Make the most of your next trade show by giving attention to three phases: the before, during, and after. Start with a list of the reasons to participate in a trade show.

Meeting prospective customers and increasing sales may top the list. An opportunity to meet the competition is also important. There is nothing like the inspiration that comes from wanting to do better than a competitor.

A successful trade show experience should start before anyone arrives at the venue. Get things going by reaching out to prospective attendees before landing on site.

“I like to touch base with attendees prior to the show,” says Aaron Auger, water treatment division manager at Mi-T-M Corporation in Peosta, IA. “That gives you an idea as to how many customers will be present and puts a personal touch by inviting them to stop by your booth.”

At the trade show, take full advantage of the in-person experience. “One thing that I feel is very important is to have a good showing of your product,” says Auger. “If you are going to take the time to exhibit, then make sure you have equipment in your booth that people want to look at.”

Attendees really do want to see and be informed about new products and innovations as well as upgrades to well-known ones. Capitalize on that interest.

“I’ve been doing this long enough to know that customers don’t come to my booth to talk to me,” says Auger, laughing. “They want to touch, see, and feel the products I have to offer.” 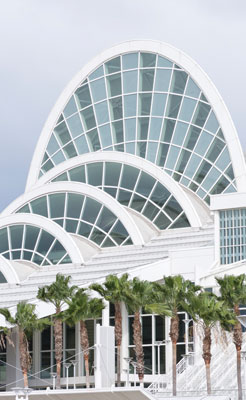 That does not mean attendees are focused entirely on interaction with products. The trade show venue affords a setting for idea exchange.

“I also think it’s important to socialize outside of your booth,” says Auger. “Make sure you take the time to be seen at lunches, receptions, or meetings to be able to speak to your target audience in a setting other than your booth.”

Informal settings may be better for some discussions. “You may have more time for a conversation in a more relaxed setting,” explains Auger. “That seems to go a long way in establishing a rapport with others.”

The trade show does not end when the participants pack for home. “Follow up,” says Auger. “That’s the most important thing and the entire reason you go to the show in the first place: to get in front of customers and establish a relationship.”

And the relationship is sustained with follow through. “If you stand in your booth all day and tell people you’ll get them what they need and don’t, pretty soon those people will be walking past you to a competitor,” explains Auger.

There’s always something to learn from everyone, says Cindy Cook, purchasing manager at Chappell Supply & Equipment Co. in Oklahoma City, OK. Take advantage of the setting.

“Trade shows can be large expenses both to exhibitors and attendees, so remember that,” says Cook. “Which-ever you are, don’t forget the focus; there is always a positive to talking with people of whatever industry, whatever demographic, whatever part of the country.”

The lead up to a trade show matters. “Organization and preparation are key,” says Cook. “We have checklists for each show that we attend so that nothing is overlooked and forgotten.”

Thoroughness simplifies activity at the trade show venue. “I have a few standard ‘kits’ that are included—office supplies, tools, medicine, and first aid, as well as anything else you need to look and feel your best, like a lint roller or even disposable tooth brushes,” explains Cook.

Cook also recommends contacting customers before the show. “Reach out to prospective and/or current customers or vendors ahead of time to find out their availability and create a specific agenda for the meeting,” she says, and “set aside time for a few spur-of-the-moment meetings with both new and old acquaintances.”

While at the trade show, the tenor should be upbeat. “Positivity and positivity,” says Cook, should be the mood.

“Make the most of whatever situation is presented to you,” explains Cook. “I am not smiley by nature; however, I try hard to keep a smile on my face the entire time. You have to remember that people will associate you with the business you represent.”

Cook adds there are actions to avoid during a show. “Sitting down, being unapproachable, being preoccupied with electronic devices, or looking bored will not do you any favors with people walking the show,” she explains.

“Follow up on the contacts that you made at the first available moment, whether the evening after the contact is made or once back at the office,” says Cook. “Even a thank you for stopping by goes a long way.”

After the show do some assessment. “Have a brief summary meeting with those who attended to see what could have been done differently or better,” says Cook. “Also, discuss any notes that were made along the way for a more positive show next time. You won’t remember the new ideas a year later if they’re not in a file ready to go.”

Given the abundance of free, good advice about how to have a successful trade show, it’s amazing one document can stand out. But, “Trade Show Keys to Success” at https://gov.texas.gov/uploads/files/business/Trade_Show_Keys_to_Success.pdf produced by the Economic Development & Tourism Division in the office of the Texas governor, Greg Abbott, does.

The one-page primer from the Lone Star State cannot be beat for hitting everything about the before, during, and after of a trade show, from knowing objectives to measuring return on investment based on objectives. There are also tips on how to choose the right event.

A few other things to consider: Team members who will be staffing a booth at a trade show for the first time might benefit from some practice sessions at the company’s home base. Brand and logo should not only be highly visible, but also presented in an attractive way. Local media are fewer and fewer, but a press release about team members traveling to a trade show might be picked up, especially if they are going to an international show.

The federal government and most state governments promote trade in every way they can. The International Trade Administration at the Department of Commerce at www.trade.gov/trade-shows is a wonderful resource for companies that want to explore participation—or increase participation—in international trade shows.

In a three-part series, the Minority Business Development Agency (MBDA) at the Department of Commerce offers many good insights into how to get a trade show right. (See part one via www.mbda.gov/news/blog/2016/03/tips-trade-show-success-part-i.)

The MBDA recommends seizing the moment. If traveling internationally (or far), stay on for a day or two after the show to meet, if possible, with local buyers (existing or potential). Visit their facilities.

And the MBDA advises that follow-up be personalized but not persistent to the point of being annoying. Sending unsolicited product updates or newsletters, for example, might be too much after-show contact for some. Conversations during the trade show should help sort out which customers prefer more or less contact, as well as which mode of contact they would most welcome.

There’s enrichment to be had by attending the educational and other group sessions at a trade show. Market intelligence can be gained at the sessions, too. And it can be acquired in a discreet way. (Going from booth to booth when one has a booth to staff is probably not the best path to such intelligence.)

The surest way to succeed with a trade show is to avoid the worst-case scenarios—whether identified from experience or through imagination. List scenarios and then do what it takes to ensure they do not happen.

Worst possibilities include products lost in transit, machine to be demonstrated does not work, booth in a terrible location, etc. Make a list. Then list ways to counter everything that could go wrong.

Finally, flip it all around to the positive. List all the outright plusses that derive from trade shows—the new contacts, the learning, the motivation to innovate.

Trade shows are windows to the sphere of doing. (Some of us have gone to trade shows just for the sheer joy of seeing the genius on display and not because we were in the market for an automated pallet disassembler.)

The joy realized in inventiveness and inquiry carried us to 2020. If we reclaim the joy, soon trade shows—and the vitality of every facet of life—will again churn.