Veterans Day is a time to pause to consider the contributions of all who served in the military. Red poppies still appear here and there on November 11, though they are mostly reserved for Memorial Day in May.

Yet red poppies—symbols of consolation and comfort captured in John McCrae’s poem “In Flanders Fields”—were once virtually synonymous with November 11. They reminded all that some who served did not return. And on this Veterans Day, it might be nice to display a red poppy in quiet remembrance.

Many members of our industry are military veterans. They have had experiences in training, teamwork, and conflicts that most of us will not.

We life-long civilians have gratitude for those who serve in the military, even as most of us lack a genuine understanding of what it means to serve. As one way to honor military veterans, we seek to gain some perspective from them on how their service has better prepared them for their roles in this industry—and in life—as well as what we might be doing to demonstrate connection to and appreciation for the service of military veterans.

And we do so here.

“I was fascinated with heavy equipment, and I knew I did not want to go directly to college after high school, so I enlisted in the Army to train as a heavy equipment operator,” says Michael Schramski, owner of Aamerican Powerwash Equipment and Supplies LLC in Albuquerque, NM. “I spent two years in Nelligen, Germany, outside of Stuttgart, and six months in South Vietnam.”

One thing Schramski learned during service is that he did not want a career in heavy equipment. He entered college, earned a degree in accounting, and started a career in banking, rising to vice president of a local bank in Santa Fe, NM, just three years after graduating.

Schramski also had his worldview reinforced. “I’ve always thought America is the best country the world has ever seen,” he explains. “I feel serving in the military actually strengthened my love for my country.”

It was years before bank colleagues knew Schramski was a veteran. “I really did not speak of it,” he says, noting things have changed.

A founding member of the New Mexico Veterans Business Advocates (nmvba.org), which advocates for veteran-owned small businesses, Schramski cites success the group has had in working with legislators in New Mexico on bidding preferences. The group also sponsors an annual expo and job fair and other events.

Schramski’s business is CVE-certified, a designation earned and administered through the Veterans Administration (VA) Center for Veterans Enterprise. Attaining the certification takes time, but he recommends doing it as it simplifies interaction with federal entities.

The CVE is relatively new. “On December 22, 2006, President George W. Bush signed Public Law 109-461,” explains Schramski. “It was designed to improve the business climate for veterans, to minimize access barriers, and to inform the public about the benefits of working with veteran-owned small businesses.”

[See the Veterans First program details via the link provided at the U.S. Department of Veterans Affairs website (https://www.va.gov/osdbu/verification)].

Environmental consultant Robert Hinderliter, who is based in Fort Worth, TX, joined the Kansas Air National Guard in Wichita after graduating from Oklahoma State University with degrees (BS and MS) in mechanical engineering. While he was still in pilot training, his guard unit was activated in response to the Pueblo crisis.

“USS Pueblo (AGER-2) was a Banner-class environmental research ship, attached to Navy intelligence as a spy ship, which was attacked and captured by North Korean forces on 23 January 1968,” explains Hinderliter. “I ended up on active duty for 28 months and ferried an EC-47 to Saigon, which was diverted to Pleiku, Vietnam.”

When Hinderliter’s unit was deactivated, he spent three years flying RB-57s out of Forbes Air Force Base in Topeka. He then resigned to move his family to Fort Worth, TX, where he started a power washing business, which his son, Michael Hinderliter, now owns.

Hinderliter’s military service introduced him to the complexity of congressional law making, the activities of regulators, and the seriousness of polluted waterways. “I really did not understand what the fuss over water pollution was about until I was assigned to fly EC-47s out of Grenier AFB, New Hampshire,” he says.

From the air, Hinderliter was able to see sludge being dumped by industrial sites into rivers and parts of the Great Lakes. In 1972, the year he resigned from the military, the Clean Water Act passed. He knew then that the industry would need to become part of the effort to restore U.S. waterways and keep them clean.

“My military service gave me the knowledge to travel an unexpected path as a civilian in a political environment,” says Hinderliter. He explains it allowed him to accomplish all he has, including making fundamental contributions to the development of rational and workable best management practices (BMPs) for the industry.

“I was a CH-46 helicopter crew chief for the United States Marine Corps,” says Kyle O’Hearn, owner of Powergreen LLC in Olmsted Falls, OH. “I chose the Marines because I believed it was the most challenging branch of the military and commanded the most respect. I had not set goals near the end of high school and didn’t really know which direction I wanted my life to go.”

O’Hearn explains his service provided a very strong foundation for civilian life. “The most important lessons I learned while serving are patience and persistence. I like to think I joined with a good core value system already in place, so the Marines taught me to see the value in working hard and being okay with having to wait awhile to see the best results.”

Recognition of veterans is something O’Hearn takes seriously. “As a company, we always offer veteran discounts, and that’s something I think more companies, not just those in our industry, should be doing. It’s nice for people to thank you for your service, but that’s not why most of us joined.”

Indeed, O’Hearn emphasizes the reasons for service are tied to ideals and belief in the job being done. “We didn’t join to get thanked by everyone and get 10 percent off at the Home Depot,” he says. “But that’s exactly why we should help our vets—for their selfless sacrifice of time, family, and in some cases, health.”

O’Hearn suggests that the discount concept extend widely. “This should be the same for our vendors, also,” he says.

There are challenges in transitioning from the military to business ownership, says O’Hearn. One thing that should be considered is how customers respond to knowing a business owner is a veteran or a company is veteran-owned.

“Discipline and respect,” says Rick Benham, president of Kepner Equipment Inc./Chaffee-Ward Equipment in Canandaigua, NY, are some values he took from military service to civilian life. He lists several other principles.

“Do what you say you are going to do,” says Benham. “Follow through and follow up. Make every minute of every day productive in some way.”

Benham was motivated to serve because of family ties. “Since my grandfather was a decorated Korean War Army vet and my father is an ex-Marine, I believed the military was a good place to start my life after high school,” he says.

“I was into vehicles that went fast—cars, motorcycles, boats, etc.—and thought the Air Force and its planes were the epitome of speed,” explains Benham. “I wanted to get closer to them and learn all I could about them.”

Benham served in the Air Force from 1984 to 1988. “I was trained as a jet engine mechanic,” he explains. “I performed internal tear-down and build-up on the Pratt and Whitney J57 turbojet engine that powered the Boeing B-52 Stratofortress bomber and the Boeing KC-135 Stratotanker aerial refueler.”

There’s much our industry can do to connect with veteran members and veterans in all sectors. Show support, for example.

“Dealers should extend and advertise a military discount to all who have honorably served,” says Benham. “Fly the American flag 24/7/365 at your dealership and at home.”

A broad pool of well-qualified prospective employees is found among military veterans. Benham advises our industry take advantage of that pool when hiring.

“The best technical training in the world is provided by the U.S. military,” says Benham. Search out ex-military to fill your open tech positions.”

“When I was growing up during the 1940s and 1950s, during WWII and the Korean War era, national patriotism was very strong,” explains Ron Robarge, P.E., president of Spartan Manufacturing Corporation d.b.a. Pressure Power Systems in Kernersville, NC. “I never doubted my desire to eventually serve in the military as was fairly common in my age group.”

Reserve Officers’ Training Corps (ROTC) was part of Robarge’s university experience. “When I graduated from engineering school at North Carolina State University, I was commissioned as a second lieutenant in the U.S. Army Artillery Branch by ROTC.”

Robarge had a total obligation of eight years, including two years active duty and six years reserve duty. “I was assigned to Army Air Defense artillery (Nike Hercules missiles),” he explains. “I ended up voluntarily serving a total of 12 years, active and reserve. At that point, I reluctantly resigned due to the time pressures of my engineering career. I was honorably discharged with the rank of captain.” 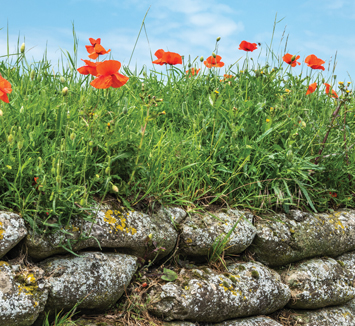 The roles that Robarge had during his military service strengthened him in many different ways. “During my active duty, I served on Nike missile sites with various responsibilities over time as executive officer, platoon leader, and site commander,” he explains. “During my reserve duty, I served over time with administrative duties at battalion level followed by six years as reserve unit commander.”

Robarge says he benefited from his military experience in three ways. “Learning to handle unusually heavy responsibility at an early age—mid 20s—which directly affected others’ lives” is first. “Developing the skill to make critical decisions on a timely basis” is the second. “Improving leadership and management skills” is the third.

Whether meeting customers in the real or virtual world, perhaps our industry could reintroduce (or at least boost) the display of red poppies on Veterans Day. The flowers are likely to start a few conversations about the recognition that all who served in the U.S. military should receive. It’s a good conversation to have.

In Flanders fields the poppies blow
Between the crosses, row on row,
That mark our place; and in the sky
The larks, still bravely singing, fly
Scarce heard amid the guns below.

We are the Dead. Short days ago
We lived, felt dawn, saw sunset glow,
Loved and were loved, and now we lie,
In Flanders fields.

Take up our quarrel with the foe:
To you from failing hands we throw
The torch; be yours to hold it high.
If ye break faith with us who die
We shall not sleep, though poppies grow
In Flanders fields.