Hide and Hair—Pressure Washing and Taxidermy

Hide and Hair—Pressure Washing and Taxidermy

Editor’s Note: Please be aware there are graphic photos in this article.

When did pressure washers first make their way into taxidermy? “Probably 15 years ago, it was starting to be discussed among other taxidermists in Arkansas,” says Joseph (Clary) Baugh, who owned  a taxidermy business with his father in that state before changing professions.

A professional colleague of Baugh demonstrated the speed and good results that could be obtained by using a pressure washer. “He primarily showed us how to clean deer hides,” explains Baugh. “Deer were the biggest volume of what we did,” says Baugh. “What he showed us, we ended up doing.” 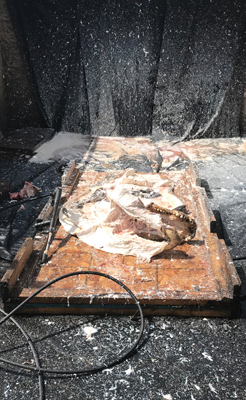 And the type of pressure washer? “We had a machine that lasted for years, a DeWalt with a 13 horsepower Honda motor,” says Baugh. “We used a roto tip (rotary nozzle). You need a custom wand or a short wand.”

Baugh reached out to a local machine shop to get the customized tip. “The roto tip is about the only way the pressure washer will work on hides,” says Baugh. “The slapping action of that tip is what takes the tissue off the hide.”

There are plusses and minuses to using a pressure washer in the preparatory phase of taxidermy. “Pressure washing does a really fast job, a really clean job,” says Baugh. “The downside—it leaves a mess in the shop.”

The alternative to a pressure washer is a knife, explains Baugh. But when cleaning multiple hides, which is often the instance with deer because of seasonal hunting, a pressure washer may be the better choice.

Another instance in which a pressure washer may be the better choice is when hides are large. Baugh gives the example of preparing a hide for a bear rug.

Some preparation definitely works best with the assistance of a pressure washer, says Baugh. “It’s really impossible to clean an alligator skin without a power washer.”

We wondered whether the alligator posed a challenge because of the tight adherence of tissue to the skin. “Yes, the tissue that is on the skin of alligators will not separate from the skin like a deer or other mammal, so the pressure washers do a great job in the separation process,” explains Baugh. “Also, the entire head of an alligator is used in a mount, so the pressure washer is invaluable in blasting the tissue off of the skull.”

For certain animals, the use of a pressure washer could cause damage. Baugh says he knows taxidermists who use the tool on turkeys, but he would not use it on small animals.

Many YouTube videos highlight the preparation of skulls using pressure washers. We checked with some manufacturers of pressure washers who did not know about the use or prevalence of their machines in taxidermy. One manufacturer, however, did have some indirect knowledge of use.

“We don’t have anyone who has specifically designed a machine for taxidermy, but I know that our machines are being used in the industry,” says Chris Wingen, president and CEO of AaLadin Cleaning Systems in Elk Point, SD. “Several years ago, the television show, Mounted in Alaska, on the History Channel was using one of our company’s hot water pressure washers to clean the skulls in their taxidermy shop.”

Like others we contacted, Wingen points out that manufacturers don’t know how all their machines are being used in the field. (As an aside, the unique use question is always an interesting one.)

In one online video, an Easy-Kleen pressure washer is mentioned. We get the idea that many manufacturers are serving the taxidermy industry and just do not know it.

As for taxidermists, those who responded to us had mixed reactions to pressure washers. For instance, one in Michigan does not advocate for pressure washers because freezing temperatures in winter create a problem with the spray icing. Another strives for a controlled environment in the work area and sees the use of a pressure washer as incompatible with that.

Taxidermy—from the Greek words taxis and derma, arrangement and skin, respectively—is literally the lifelike arrangement of preserved skin on a form. The form captures the lifelike look of the animal.

In addition to cleaning skins for arrangement on a form, there is an interest in preparing skulls or other bones to preserve them for study or display. Technically, cleaning bones is not taxidermy. Nevertheless, the techniques used are interesting.

Among the tools tapped to rid bones of flesh are boiling and allowing dermestid beetles to eat the flesh. Knives are usually in play at some part of the process to remove the flesh that lingers.

Each state has its own regulations for taxidermists and for anyone aiming to handle animal species. Killing animals for their skulls will likely be a crime. 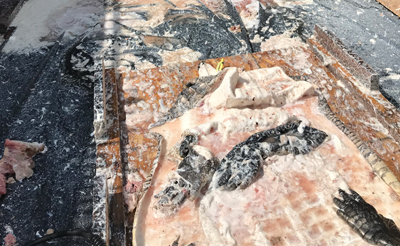 Finding a skull and cleaning it for preservation may seem a good idea, but get advice from the state fish and game representative before doing so unless you are already familiar with procedures. There is a danger in some places of coming in contact with carnivore skulls that harbor rabies. (Once a skull is boiled, the rabies threat is gone.)

Papier-mâché, cotton, clay, wire, metal, excelsior (aka, wood wool, wood shavings) have all been used as forms. Polyurethane forms are used today because the shapes can be pre-ordered and reconfigured (tailored to the skin) by the taxidermist. Some of what went into early papier-mâché was more than paper, with burlap cloth in the mix.

The U.S. Bureau of Labor Statistics does not include an entry for the profession of taxidermy. Manta.com, which tracks businesses and ownership, puts the number of taxidermy businesses in the United States at 6,289. Some of the taxidermy sites online put the number of individual taxidermists at 75,000, but we could find no census or other data to confirm a number.

Given the interest in taxidermy revealed by the professionals posting videos of their work on the internet, manufacturers and distributors in our industry may want to consider reaching out with ancillaries that meet the needs of taxidermists using pressure washers.

Wands and tips, as well as wastewater collection methods, which match the work taxidermists do could constitute a viable product line. Taxidermists also need chemicals, many of which are also used in the cleaning industry. And they often need PPE.

Distributors might talk to some taxidermists in their areas, find out what they are doing, and determine whether there are crossover ancillaries or related products they can promote and sell to the industry.

Contractors should think about serving the industry, too. Successful taxidermists might gladly hire a company to clean their facility so they can focus on preparing specimens.