Notes on the interior walls of the reentry capsule of Apollo 16. Petroglyphs. A heart a student drew on her desk.

Graffiti or not, that’s the question. The simple answer: All are forms of graffiti according to the definition of the term, the plural of graffito.

Graffito refers to any inscription, slogan, or drawing that is affixed to a substrate by scratching, drawing, etc.—nothing sinister, to be sure.

The problem is that in the contemporary world, graffiti and vandalism are often linked. In some parts of the country, no surface is excluded when vandals get going with paint or markers. Street signs, sidewalks, sides of buildings, sides of big rigs and box trucks, dumpsters, and even wooden bridges and railings in urban parks get tagged by gangs and otherwise covered with graffiti.

Federal, state, and local governments bestow grants to groups that propose to dissuade youth who would deface private and public property. On the other hand, some local governments have become so accommodating to those who produce graffiti that graffiti cannot be removed without government approval.

If the graffiti is classified as street art or is deemed to carry an important public message, it may fall into the preservation category. Complicated? Yes.

Thank goodness that when graffiti is slated for removal, things get easier. That does not mean some surfaces aren’t tough.

“The most challenging substrate from which to remove graffiti is an extremely porous surface, as the paint gets into the pores and is difficult to cover with chemical,” says Joseph Daniel, CEO of ITD Inc. in Tucker, GA. “The other difficult substrate is a painted surface from which you want to remove the graffiti but not the underlying paint.”

Porous substrate is a big challenge, the one cited first by our three sources. We mention herein a couple of the products each source’s company offers. Be sure, though, to see their respective websites for a complete list, and to learn about their commitment to non-hazmat and biodegradable formulations.

“Our company has products to address both situations,” says Daniel, referring to the pores and the painted surface. They developed Mark Shark for porous surfaces and Face Away for painted surfaces.

A type of dolomite (limestone) quarried in southern Minnesota near the Minnesota River and its tributaries is known as Kasota stone (or Mankato stone). Many public buildings in Minnesota cities are constructed using Kasota stone, explains Gil Shipshock, vice president of Graffiti Solutions Inc. in St. Paul, MN.

Kasota fits the porous (soft stone) category. An uptick in graffiti in his region means buildings that were once coated with a “sacrificial coating” every five years are now receiving an application every two years, says Shipshock.

“The ‘waxy’ sacrificial coating makes it easier to remove graffiti without damaging the substrate,” explains Shipshock. With the increase in graffiti across the last two and one-half years, the treatment has taken on added importance. 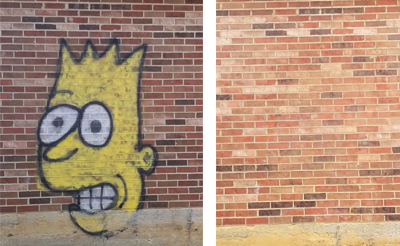 Before & After. Photos courtesy of ETS

Shield Max® is the brand name for the protective coating Shipshock cites. It is generally applied to a height of nine feet and is invisible except for a possible glisten in rain.

Shipshock’s chemical and manufacturing company that focuses on graffiti grew from his power washing company. For 10 years he tried different removal products and was not satisfied with any of them. His dissatisfaction led him to product development, and he began to work with a chemist to develop graffiti removers.

It was approximately 20 years ago that Shipshock’s company introduced one of its most well-known products, Elephant Snot®, to the market. Named in part for its viscosity, the product can dwell on a substrate for up to three days to gently detach paint from porous surfaces.

Hot water at 190˚F and a flow of five gpm (at 1500 to 2000 psi) are the ideal combination to remove the graffiti after the application of chemical, says Shipshock. If no hot water is available, dwell time can be increased to compensate.

Customers typically weigh cost (including time) and benefits of removal, explains Shipshock. Patience is required to wait through the dwell time on sensitive surfaces, but if the surface is part of a significant structure, such as a national landmark, the wait makes sense. A trailer of an 18-wheeler might just be painted over, but weight considerations (adding to vehicle’s weight with a lot of paint) might preclude that.

The array of products that Shipshock’s company manufactures meets the needs of urban and rural customers. “We’re seeing an increase in sales to parks, especially national parks,” he explains as he laments that graffiti has become a ubiquitous part of the landscape, and possibly worse since spring 2020.

As it happens, Shipshock’s Elephant Snot® product was called into service to reclaim the beauty and historic significance of some petroglyphs by removing graffiti from them. “I’m very proud of that,” he explains.

Tell-tale reminders that graffiti has been removed—ghosts or shadows—get much more attention than they merit, simply because some products do not work with application explains David Hart, owner of ETS Co. Inc. in Norwood, PA. Hart’s company makes Taginator® (for masonry) and Tagaway® (for smooth surfaces), brands of graffiti remover.

Not only does Hart keep a repository of reference photos of types of graffiti, but also he talks frequently with contractors who use his company’s products. Conversations inform product development.

“There’s always a possibility [of ghosting], but the question is, how possible?” says Hart. “[I have asked] our contractor customers over decades, ‘Out of how many jobs have you seen ghosting?’”

“Not many,” is the answer. Most contractors report that fewer than five in 100 projects leave any sign that graffiti has been removed.

Factors that determine how graffiti should be removed are the type of substrate; how long the graffiti has been present; and the coating (e.g., paint, marker) used to tag.

“Limestone is the toughest surface to remove the graffiti off of as well as out of the surface,” says Hart. “It’s so porous. It just absorbs like a sponge. That’s not to say you cannot remove [the graffiti].”

Hart explains his company’s Taginator product followed by a gentle, flush rinse can remove the graffiti from limestone, but it is the most challenging surface to work with. However, brick and stone, cinder block, stucco, concrete, and slate are no problem. As for sacrificial coatings, he does not consider them necessary.

Sacrificial coatings—or those applied to abate the effect of graffiti by making it easier to remove—can be problematic, says Hart. “Sometimes a contractor is unaware that a wall has a graffiti-proof coating and applies a graffiti remover that causes adverse effects and complicates matters. So, if you can easily remove graffiti from masonry surfaces using an effective product like Taginator, then why coat them?” He does not, however, discount their utility in some circumstances, such as on limestone.

Masonry also requires special attention when removing graffiti. It is the construction material for many historic buildings. The U.S. General Services Administration (GSA) provides detailed instructions on how to remove graffiti from masonry. The emphasis is on removing the graffiti as quickly as possible after a tagging incident and as gently as possible.

Before any product is used on a GSA-controlled masonry structure, it must be tested on a small part of the building. Testing is a good idea even on non-historic buildings.

Deciding whether to remove or cover graffiti is easy. “It all depends on what the substrate is,” says Hart. “If it’s an attractive masonry building, you don’t want to cover that up when Taginator can easily remove the graffiti. Perhaps if it’s just a painted cinder block wall, then color match painting may be the better option than removal.”

“Nice masonry walls, however, should never be painted over.” Painting over might send the wrong message—paint over, more graffiti, repeat. (No one wants to encourage more tagging, but a freshly painted cover may look like an invitation instead of a deterrent.) “For graffiti on painted and smooth surfaces such as garage doors, truck trailers, and playground equipment, removal is best and is done with a spritz and wipe with Tagaway; but test first to learn if the underlying surface is more durable than the graffiti paint.”

Besides matching product to substrate and goal, be sure to accurately measure cost, says Hart. “It’s important to look at coverage and use cost per square foot of application.”

And it’s important to consider ease of application of a sprayable liquid product, explains Hart. A contractor must include the time it takes to complete a job with the cost of materials used to get the job done. That’s true whether he or she is washing the exterior of a house or removing graffiti from the home’s garage door.

Eye of The Beholder?

Apollo 16 returned to Earth just over 50 years ago in April 1972. The scribbles in its reentry capsule have genuine historical value, and no one would suggest removing or painting over them.

In communities, the sheer quantity of graffiti—even that classified as street art— can overwhelm. Subway cars in New York and Philadelphia are popular “canvases,” as are bridge embankments. In metropolitan Washington, DC, it’s the bridge and rail embankments of mass transit that are saturated with graffiti—some quite imaginative and some not.

One can’t help but jump to the conclusion that more outlets for more hands—all hands—in work of all kinds would put the graffiti makers’ hands (and the minds that guide them) into different (and much-
needed) pursuits.