Growing up in Sioux Falls, SD, Erin Peterson was no stranger to the power washing industry. Her father, David Peterson, and her grandfather, Elmer Peterson, founded Midwest Cleaning Equipment in 1993. In 2002, they sold the company and Elmer retired. David went on to manage Hotsy and Landa stores in Ohio, West Virginia, North Carolina, and Kentucky. He was hired at American Pressure Inc., MN, in 2006 and is now their sales manager. The family lives in Buffalo, MN.

Erin says that moving around the country as a child was an adventure. “There were always new faces and places to see. Some of my favorite memories include when my dad would take me along to work, and I would get to spend the day with him. I enjoyed settling in Buffalo the most.” 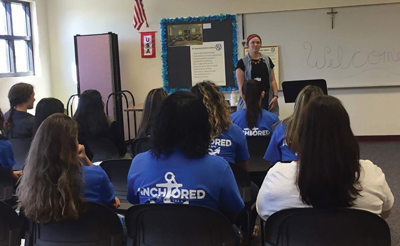 Not only did the energetic young woman learn about the power washing industry through her father’s work activities, but she has also been heavily involved in the youth ministry programs at her local church since she was about 12. Beyond being on her youth group’s leadership team, she also volunteered as a basketball coach, occupational therapy assistant, and camp counsellor. It was these combined experiences that led her to apply for (and receive) a 2017 scholarship from the Cleaning Equipment Trade Association (CETA).

Erin thanks CETA for this support, while crediting her involvement with her youth ministry work to supporting her faith, giving her hope, and providing some clarity as to what direction her university career should lead her. “Being involved with the church programs provided me with a great deal of support in discovering who I am, and it led me to make a lot of good choices, to strive for high standards, and to choose my friends wisely,” explains Peterson. “The various youth ministers and adult role models in
our faith formation classes over the years have been important in shaping who I am today.”

The Seed of Inspiration

When she was in the eighth grade, Peterson learned of a youth ministry program called the National Evangelization Team (NET, www.netusa.org). While she would have to wait until she graduated from high school to embark on a mission with NET, the seed of inspiration to further serve the community through this program was sown.

NET is a nonprofit organization governed by a national board of directors which was incorporated in the state of Minnesota and is funded by individual donations, program fees, and grants. In the past 36 years, NET has become a global organization, and teams of youth ministry volunteers have led more than 32,000 retreats and ministered to more than 1.9 million young Catholics.

NET started in the Archdiocese of St. Paul and Minneapolis in 1981. Its mission is to invite young people to develop Christian character through the study and practice of their faith and to equip youth workers and young adults with the ministry skills needed for evangelization. The acronym ‘NET’ was inspired by the scriptures: “Come after me, and I will make you fishers of men,” Mark 1:17, and “Put out into deep water and lower your nets for a catch,” Luke 5:4.0

On A Mission in Florida

Soon after graduating from high school in the spring of 2016, Peterson packed one suitcase (yes, just one!), and she embarked on a nine-month NET mission in Fort Pierce, FL. She was assigned to work in the predominantly Hispanic low-income neighborhood of San Juan Diego. She worked with both middle- and high school-aged students from both public and private schools.

She and fellow youth missionaries were billeted out to stay with host families, rotating to a new home every two weeks. It was a highly disciplined program where they were permitted a maximum of 20 minutes on the phone each day, and they had very little free time, focusing instead on service and ministry. 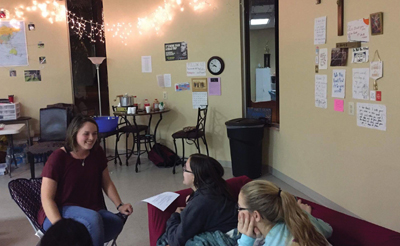 “Even our nights were spent serving families and giving back to them as a way of giving thanks for letting us stay with them,” recalls Peterson. “We lived the missionary spirit of giving of ourselves for the entire nine months. It was one of the best parts of the program. This was my first time away from home, but I was on a team with eight other people, so it was nice to have the support of other NET members. Experiencing the various living situations and families provided a good realization as to how much my parents have done for my brother and me. I now understand how hard they worked to provide us with a safe environment and a stable home.”

As part of the parish team, Peterson helped put on several retreats for the church. They played games to encourage the kids to relax and have fun and offered food and fellowship to help build relationships. In both small group settings and talking one-on-one, they shared the message of the gospel through plays, praise, worship, or music.

Her first week in Florida, Peterson had the privilege of connecting with a young girl whose mother had passed away a few years earlier. It turned out to be a highlight of her NET mission. “I was so fortunate that she ended up being in one of my host families,” says Peterson. “It was neat to get to know her, to be there for her to talk to, and to pray for her. I met with her on a weekly basis while I was in Florida, and we still keep in touch.”

In September 2017, now 19-year-old Erin started her first year at the University of Mary in North Dakota. She is working to attain both a Catholic studies and a social work degree because she feels that this would tie in nicely with her work in the area of youth ministry. She is enjoying getting involved on campus, joining student government, meeting new people, and strengthening her leadership skills.

“I consider myself very blessed to have had such a strong youth ministry program while growing up,” states Peterson. “So many people have given so freely of their time for me and other youth in our church, and they have been such strong role models for me. Having this support has changed who I am and made me feel passionate about giving back and being a role model myself.

“My faith is such a big part of my life, so it is important for me to give back for all I have received,” she adds. “I found freedom in giving back. The more I gave, the freer I felt. My fellow NET team members and I were able to show these students that you can have fun without going out and partying, and we were able to be a strong (and positive) influence for other kids.

“To be awarded the CETA scholarship meant a great deal to me financially, to ensure that I could go to the college of my choice,” concludes Peterson. “I was honored that they would invest in my education, so I would be able to serve others in the future.”