Getting the Most From Your Hoses

Getting the Most From Your Hoses

A hose is a pliable water pipe. For millennia, civilizations have been supported by pipes. Early on pipes were made from clay, stone, and wood, and later from metals, concrete, and fiber. By exploiting simple mechanical ploys, such as angle, tube diameter, and valves, builders of pipe-based systems have been able to accomplish a great deal, including moving water and doing work with water (turning a wheel, sluicing timber).

Yet without the ability to make flexible tubes, or hoses, there was a point at which the practicality of tubes was stifled. Even with a pump pushing fluid, a rigid, long tube was not easy to manipulate.

Firefighters with pumpers, users of wells, and others had good reason to look for ways to make tubes flexible. Hoses were constructed out of materials, such as leather, which was sewn together and was vulnerable to ruptures. Stitching together material to make hoses was possible, but it wasn’t practical. A simpler way to make a tube with greater integrity is to bore out a material; that became possible when rubber became part of the industrial world.

With the introduction of rubber to manufacturing processes in the early 1800s, flexible tubing got a big boost. Even more significant for making hoses that were resilient, relatively impermeable, and had good tensile strength was the process of vulcanizing rubber. Synthetics (e.g., neoprene) were competing with vulcanized rubber from its earliest days and giving manufacturers an increasing number of options when constructing hoses.

A hose may represent a documented progression from a natural trough (carved from substrate by wind and rain) to a man-made conduit to pipe to flexible tube, but it is much more. Like any component of industry we look at closely, the hose reflects the ingenuity of countless inventors—credited and not.

The hose continues to change in ways that benefit all who depend on it as a part of their work. The choices now go far beyond rubber or polyurethane, long or short. For members of the pressure washing industry, the accumulated innovations result in better hoses in any number of ways.

“In recent years, there have been developments in hose manufacturing using compounded materials to increase the flexibility of high pressure hoses,” says Bill Fischer, vice president of industrial sales at FNA Group in Elk Grove Village, IL. “These advanced designs provide even greater durability as well. Advanced compounds of polyurethanes and elastomers have provided science-based solutions to hose technology.”

Fischer’s company has taken advantage of the science-based solutions to improve products. A new product often incorporates many new plusses. Consider one example that Fischer gives us. “In addition to the user-friendliness of added flexibility, our Morflex™ hose provides a dramatic increase in abrasion resistance and UV protection,” he explains.

There’s a guiding principle for the development and appraisal of all new products, says Fischer. “The end user’s experience with this revolutionary innovation should be any manufacturer’s ultimate objective,” he explains.

Fischer highlights a few of the noteworthy changes in hose products just in the last year. “There are additional advantages and benefits to the new blended composition outer jackets over the basic wrapped or smooth cover rubber products,” says Fischer. “Easy to clean ‘one-wipe’ hoses outlast the old imported rubber ones, not only in higher UV protection but including a substantial abrasive resistance while leaving no unsightly marks on the cleaned surfaces.”

Protection from ultraviolet light, abrasive resistance, and mark-free movement are the sorts of qualities in hoses that many contractors first think about only when they actually experience one of those issues. With manufacturers, such as Fischer’s company, looking ahead, assessing the needs of end users, and designing hoses for the best results, increasingly contractors will have an experience with hoses that is more trouble-free than ever before.

Depending on the setting in which a hose is deployed, the improvements an end user might like to have will differ somewhat. Manufacturers strive to make their hoses precise fits for the context in which they serve.

Or look to the food-processing industry where a sanitary environment must be maintained. ‘We also introduced a ‘FoodJet’ hose which is ideal for food processing environments because of its antibacterial, animal-fat resistant cover,” says Sheperd. 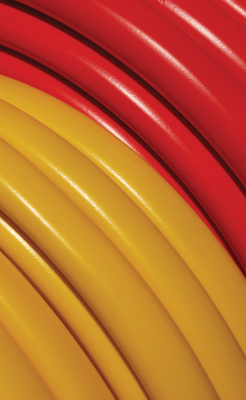 Designing hoses for specific settings is just one focus of manufacturers. Improvements to hoses that bolster safety is another. “Our full line of wire braided-rubber pressure washer hoses is reinforced with a premier grade of steel wire from Belgium which greatly reduces the chance of premature hose ruptures,” says Sheperd. “Pre-mature hose ruptures typically happen due to lesser grades of steel wire; lesser steel is used to reduce cost.”

Other safety features include warning coloration that reminds workers the hose is there. “We have a line of safety yellow-colored pressure washer hoses which greatly increases visibility, resulting in reduced chances of being tripped over,” says Sheperd. And, he adds, it’s not just about reducing the chance a hose will be tripped over, but also alerting those in powered vehicles so they will not run over the hose inadvertently.

For all the innovative products that continue to be offered by manufacturers, there are still products to be developed. An ideal-world hose product, we can call it.

“A hose that would truly handle steam,” says Sheperd, is a hose he puts in the ideal world. “There really isn’t a steam hose currently available in the industry that can truly handle steam-cleaning operations.”

The intricacies of making a hose that does not encumber an equipment operator are many. The hose has to be more than flexible. It has to be long enough to reduce the times equipment will have to be moved, but not so long it is unwieldy. The hose must be supple enough so that it will not kink, but also strong enough to resist rupture. It should be as easy as possible to wind on a reel for storage. The exterior should resist accumulation of debris and residue.

A contractor can make a list of attributes that would make the best-possible hose. Manufacturers and their distributors—are listening and responding. Changes in materials used to make hoses mean contractors no longer have to choose between durability and flexibility. There are also options in coupling (to the machine and the spray gun) that speed up changes. Color-coding allows contractors who switch among diameters to distinguish easily between a ¼-inch and a 5/16-inch diameter hose.

Some of the interesting developments in hoses across the last five years include more exacting efforts to support long hoses with a pressure washer unit that provides consistent pressure at any point in the length. For example, in 2010 Daimer Industries Inc. in Woburn, MA, announced the introduction of a Super Max™ 12820 unit that supports hoses up to 100 yards in length.

In October 2015, ProPulse® in Peosta, IA, announced receipt of a patent for its UberFlex™ hose, with other patents pending. The patented high-pressure, highly flexible, stable length thermoplastic hose is designed for use on middle- and high-end consumer products.

Getting the most from hoses—using them to greatest efficiency and with maximum safety—requires a partnership among manufacturers, distributors, and contractors. Manufacturers aim to make the best hoses possible. Distributors give contractors choices and recommend selections based on work environment. Contractors use hoses to specifications and maintain them; they also provide feedback about what they like and don’t like about a particular design, a loop that informs subsequent changes.

The best hoses will perform to expectations only when maintained properly. Improper storage—from not disconnecting to not draining residual fluid—will reduce the life of a hose. So, too, will storing hoses in harsh environments, such as subfreezing temperatures and outdoors across winter.

“Hose” probably originated from the Dutch word for water pipe, “hoos,” but its continued evolution has been essential to all high pressure applications. A hose may be a familiar component of equipment, yet it merits respect both for its utility and its tie to the history of industry.