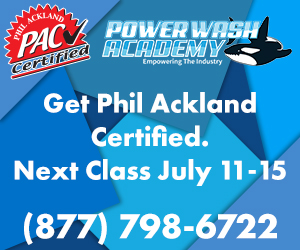 Congress has passed and the President signed into law the Tax Increase Prevention Act of 2014, which retroactively extended for one year some 54 expired tax breaks. The so-called “tax extenders” effectively allow pressure washing businesses to claim a number of popular but temporary tax incentives on their 2014 tax returns filed in 2015.

Businesses big and small, commuters who use public transportation, teachers who spend their own money on classroom supplies, individuals who claim the state and local sales tax deduction, higher education tuition, and people who live in states without state income taxes would have been denied these tax breaks without these one-year extensions.

Were it not for the new law, pressure cleaning businesses would be unable to claim business and energy incentives such as bonus depreciation, Section 179 first-year expensing, and the research tax credit, among others. Unfortunately, the Tax Increase Prevention Act does not make permanent any extenders—nor extend any of them for the usual two-year period that has been customary. Instead, under the new law, these extenders are for the 2014 tax year only.

The Tax Increase Prevention Act extends many previously expired business tax incentives for one year. Those provisions most likely to have an impact on a pressure cleaning business include:

Business Property Write-Offs — Bonus depreciation has been extended allowing an additional first-year deduction of 50 percent of the cost of equipment acquired during the 2014 tax year. With 50 percent bonus depreciation, a pressure washing contractor, equipment manufacturer, and a dealer or distributor can deduct half the cost of new capital purchases in the first year.

Under Section 179 of the tax code, small businesses are allowed to deduct the cost of investments in business assets such as equipment, property, and software at the time of purchase, rather than over many years, thus creating a more immediate tax windfall. In other words, Section 179 of the tax law allows a business to deduct the entire cost (100 percent) of up to $500,000 of new or used computer equipment, heavy vehicles, fixtures, furniture—in fact, most depreciable assets with less than a 20-year life.

To some, the bonus depreciation break may be more valuable than the Section 179 break because the Section 179 expensing deduction is limited to the taxable income of the pressure cleaning business with any excess carried forward. Those actively involved in running a business can however, not only claim losses generated by 50 percent bonus depreciation against other income but can also carry any still unused losses back for two years and get a refund check from Uncle Sam.

And don’t forget, a pressure cleaning business may be able to use Section 179 expensing on qualified leasehold, retail improvement, and restaurant property that was placed in service by December 31, 2014. Of course, there’s a limit of $250,000 on qualifying property.

Research Write-Offs — The often-overlooked research and development credit expired completely at the end of 2013. Open to businesses of any size (and thus a darling of many a large corporation), the provision offers a tax credit covering as much as 20 percent of the cost of research or experimentation related to creating new products or improving existing manufacturing processes. And, as many contractors, distributors, and manufacturers have discovered, the broad definition of “research” applies to their activities. The extension applies to both the 20 percent and 14 percent alternative credit. The credit has not been made permanent.

Work Opportunity Tax Credit — Under the tax extender bill, a pressure cleaning business can again apply for the Work Opportunity Tax Credit if they hire military veterans and active reservists. An even larger credit is available to small businesses that hire individuals who receive supplemental security income or long-term family assistance, were long-unemployed or service-disabled veterans. Other hiring-related provisions that were restored for the 2014 tax year include credits for businesses that hire qualified ex-felons, or qualified summer youth employees.

Small Business Financing — The 100 percent exclusion from capital gain allowed on the sale or exchange of qualified small business stock held for more than five years by non-corporate investors has been extended. Stock acquired by investors in a pressure washing business after 2014 will be entitled to only the regular 50 percent exclusion if not changed by our lawmakers.

Energy-Related Tax Savings — The extension of the energy-efficient, commercial buildings deduction allows an above the line deduction for energy efficient, commercial buildings. Last year, business owners who built or renovated property featuring renewable energy technology—such as solar panels or “green” lighting equipment—could take advantage of a special tax deduction. Until this bill became law, the deduction could only be claimed on property placed in service before the end of 2013. Now, any such property opened in 2014 would qualify for the deduction, as well.

There are, of course, narrower provisions including tax breaks for film and theater producers, NASCAR racetrack owners, racehorse owners, and rum producers in Puerto Rico and the Virgin Islands included in the Tax Increase Prevention Act. Among the other provisions applying to businesses that have been extended are:

Changing Your Mind About Taxes

Under the new law, these extenders are for the 2014 tax year only. Obviously, since these changes were made late in 2014, this leaves little time for planning and may, in fact, require changes to already filed 2014 tax returns.

Fortunately, once the tax returns of a pressure cleaning business have been filed, changes can be made on an amended tax return. Generally, a business—or its owner—can change their mind about previously reported income and missed deductions within three years from the time the return was filed, or within two years from the time the tax was fully paid, whichever is later.

Obviously Uncle Sam, in the form of the Internal Revenue Service, wants its money sooner rather than later. That usually means pre-paying an estimated tax bill or fully paying the expected tax bill on or before the deadline, either March 15 or April 15 for most businesses and individuals using a calendar year.

Today, however, a pressure cleaning business can delay filing their 2014 tax return with little worry about the IRS’s strict pre-payment rules. Using Form 4868, “Automatic Extension of Time to File a U.S. Individual Tax Return,” an independent contractor can obtain an automatic, six-month extension of time in which to file tax returns.

While the Form 7004 does not extend the time for payment of tax, the Tax Increase Prevention Act of 2014 is all about reducing a pressure cleaning operation’s tax bill with incentives. So for 2014, 50 percent bonus depreciation is back and the dollar limits for Sec. 179 expensing are way back up at $500,000, with a $2.5 million investment ceiling.

Will your pressure cleaning business reap the reward of a lower tax bill thanks to the Tax Increase Prevention Act of 2014?