ainfall in the Golden State

Drought followed by deluge. That’s what California experienced in 2014, when after a prolonged dry spell, rain began to fall heavily.

By mid-year 2014, the lack of rain was so pronounced that municipalities and the California EPA State Water Resources Control Board (SWRCB) had begun to limit water use. It was a necessary and prudent action in a state that has more than 38 million residents who need potable water.

Yet restrictions on water use can be a real challenge for owners of businesses that use water to provide a service, power washing contractors among them. How does a contractor keep going? It’s one of the questions we put to Carlos Gonzales, owner of New Look Power Wash in Fairfield, CA.

Communication is where it begins, as Gonzales explains to us. “What happened was in June or July of this year [2014], the state imposed very strict guidelines on water use,” he says. For instance, there are ordinances about washing down buildings with garden hoses.

Neither homeowners nor contractors wanted to violate the law. “Everyone was concerned,” says Gonzales. Homeowners were ready to err on the side of caution. The regulations were clear about garden hoses. “But we use specialty equipment,” explains Gonzales, who along with other contractors sought clarification from the SWRCB. (The SWRCB continues to add clarification and assistance at its website, www.swrcb.ca.gov.)

Many of the commercial jobs that Gonzales’ company handles are completed ultimately in the interest of the health and safety of the public. They include cleaning around dumpsters and dumpster pads outside restaurants, sites where there are bird droppings, grease, and rodent droppings—all of which present “a health hazard,” he explains. Cleaning sidewalks to clear away algae, a slip-and-fall safety issue, is another niche.

The water restrictions did not prohibit cleaning to promote sanitary conditions and safety. But with uncertainty over regulations, it became extremely important for contractors to document what they were doing, which happens to be a good general practice, too. “When we do a job, we are coming in to do a job for health or safety,” says Gonzales. “We take before and after pictures of dirty dumpsters, gas station buildup of oil….”

Before a project begins, a contractor must be sure the commercial client understands the water restrictions and what can and cannot be done within the limits they impose. With concern over unnecessary water use heightened, a commercial client may be queried by its customers about why water is being used for cleaning. Being able to respond directly to such questions is important, says Gonzales.

Remember that “the general public just sees the water” being used, says Gonzales. Whether contractors are working during the day or at night, they can expect questions—or their clients can—when there are water restrictions in effect. Be able to provide answers.

“Common sense comes into play in all of this,” explains Gonzales. That includes “judicious use of water and no mass dumping of water,” which should be standard parts of protocol.

Also, contractors must work with regulators, explains Gonzales. One of his organizations, the United Association of Mobile Contract Cleaners, has been doing just that. Contractors will follow whatever restrictions regulatory entities such as SWRCB put in place. That’s a given, says Gonzales. But contractors want the opportunity to “bring to the table” their perspective on regulations that are being formulated.

It’s the responsibly of the contractor to “be educated on state regulations,” says Gonzales. And it’s also the responsibility of the contractor to promote understanding. “The best thing we can do in the industry is to provide the best education we can to the public,” says Gonzales. When concern over water use is heightened, residents are looking more closely at usage.

For citizens that do not understand the nature of a pressure washer and the importance of commercial cleaning for health and safety, there can be misperception. “All they see is someone out there with a machine, spraying a driveway,” says Gonzales. If a concerned citizen makes a call to report such washing, it must be investigated irrespective of whether or not it is allowed. Meeting with investigators takes time away from other projects.

There have been a few drought-related halts to work for Gonzales’ company. “We were supposed to start a city contract when an ordinance passed that put the contract on hold for six months,” he says. Because of a six-month limit on contract viability it may eventually have to be rebid.

“But as far as our commercial work is concerned, we have not seen a significant dip because of drought,” says Gonzales. “We’ve pretty much kept our core—flat work and so on.”

Residential work is rarely on the roster of Gonzales’ company today. “We sort of tip-toed out of that,” he says, adding some residential-only companies may have had a more difficult time because of the drought.

Late in 2014, Gonzales had three contracts on hold because of rain. But in the larger sense, that was good news, especially for residential contract cleaners. “The recent surge of rainstorms has reservoirs in the Bay Area slowly, but surely creeping back up,” says Gonzales. That will have a “psychological effect on homeowners” who will feel better about calling a power washing contractor equipped to work within water-use guidelines. 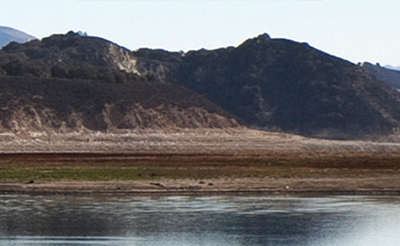 California, Rain, and Looking Ahead

Forty-five percent of the land area in California is classified as arid or semiarid. Think Mojave Desert and Death Valley (282 feet below sea level) in the southeast part of the state.

The state’s population has grown to a size 13 times greater than it was a century ago (2.9 million in 1914) and the demand for water is enormous. Ordinarily, plentiful rainfall in the northern part of the state, along with the natural flow of rivers and streams, reservoirs, and irrigation allow water to be shared across the state.

Any change in rainfall pattern in a state as large as California (third after Alaska and Texas) poses a serious problem not only for a heavily-, often densely-, populated area, but also for the important agricultural areas and industries of all sorts.

To sustain a growing population as the 21st century unfolds, California and many other parts of the nation and world will probably have to look increasingly at desalination of sea water as a source of fresh water. Conservation measures must continue, too. But fresh water from desalination to enable high-quality of life and health with adequate sanitation will be essential.

Since California voters passed Proposition 50 (Water Security, Clean Drinking Water, Coastal, and Beach Protection Act of 2002), the California Department of Water Resources has put an emphasis on desalination planning, including demonstration and construction project grants (www.water.ca.gov/desalination). Among the interests are mobile water desalination units that could be used by communities in emergencies. (The concept of a mobile desalination unit for other purposes—e.g., supplying contractors with water that can then also be recycled—is another idea rich in possibilities for manufacturers.)