The Belgian railway operator, Infrabel, ur-gently needed to repair defective concrete in the Biéreau tunnel just south of Brussels. Hydrodemolition with a Conjet Robot 365 was used to selectively remove the damaged and decaying concrete at record speed.

The 875m long, 10.5m diameter Biéreau tunnel forms part of the 4.4km long, dual Line 161D railway track linking the cities of Ottignies and Louvain-la-Neuve, 34km south of the Belgian capital Brussels. It was opened in 1975, and during its nearly 40 years of service, the tunnel’s concrete skin had deteriorated and parts were falling off. It needed urgent repairs and Infrabel has invested more than €4 million in the tunnel’s restoration. 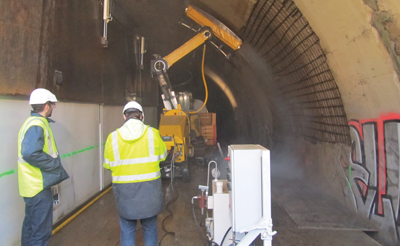 Closing the tunnel completely was not possible due to public transport demands in the urban area. So, it was decided the only option was to restore the tunnel in two sections and working and repairing the concrete from one track while trains passed by slowly on the other line. The restricted space and necessary safety and environmental precautions were critical considerations for the overall renovation project, which had to be completed in just 220 days.

Due to these restrictions, the restoration contractor BAGECI, a regional branch of industrial Belgian Group CFE, opted for the hydro-demolition technique, which uses a very high-pressure waterjet to selectively remove the defective concrete from the walls and roof. BAGECI bought a Conjet Robot 365 with a multipurpose arm and a specially-adapted feed beam, carrying the cradle and jetting lance, to fit the curvature of the tunnel wall. Conjet’s representative in Belgium, BPC International, sold the hydrodemolition equipment. The company was also responsible for service, support, and spare parts supply to guarantee 24-hour productivity and availability of the Conjet robot.

A 500kW Hammelmann S1200-48 high-pressure water pump and the Conjet Robot were installed on flat-bed rail wagons fitted with foldable, protective walls. This allowed the hydrodemolition and restoration work to be completed on one side of the tunnel while trains could safely pass on the opposite track. 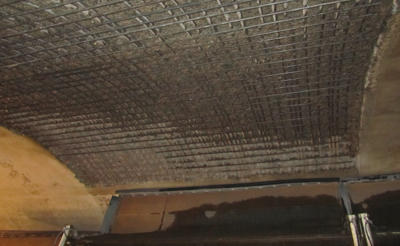 “Due to the special safety and environmental demands and lack of space, hydrodemolition was really our only option from the very start,” said BAGECI tunnel project manager Luc Bosmans. “We thought it was going to be the most productive method for this tunnel work, and it proved to be very efficient.”

In total, the Conjet Robot 365, together with the Hammelmann pump operating up to a pressure of 1200bar, worked 1370 hours in the Biéreau tunnel and selectively removed 1610m3 of defective concrete from the tunnel circumference at an average depth of 80mm to 100mm. The total area treated was approximately 17,000m2.

BAGECI also removed the concrete debris, damaged rebar, and applied new, high quality concrete on the tunnel lining. “This restoration has been completed in 220 days with the Conjet Robot demolishing and removing concrete at a rate of about 1.35m3/h. In my opinion, this is an excellent result,” said Bosmans. 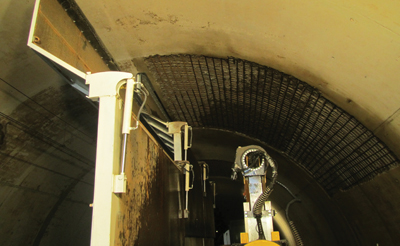 “Throughout the tunnel, the concrete has been harder and more resistant in some places, but with the auto regulation, the Conjet Robot selectively demolished and removed only the damaged concrete to the right depth over the entire surface,” said BAGECI site manager Sandro Bonsiambiante. “Another advantage was the high availability of the equipment. There is a lot of environmental dust and wear and tear on equipment in this kind of application, and the spare parts supply has been excellent with no serious break downs.”

The Conjet Robot 365 consists of a carrier that includes pulse-monitored drive wheels, electric and hydraulic systems, and a simple, easy-to-use control system. The carrier can be equipped with optional attachments, such as standard feed beam, tower, or a rotor assembly and can also be operated by a wireless control. The cutting head features a ±45° attack angle of the jetting lance as standard, variable oscillation width, and encoders for lance turning and cradle position.