Did James Watt (1736–1819) really envision the utility of steam when he watched the lid lift off his grandmother’s teapot? Perhaps.

Yet the power of steam had been known for two millennia—at least any substance that could not be seen and do work was useful to those who wanted to perform a few crowd-pleasing feats such as opening doors to pagan temples.

Steam pushed industry ahead with engines that sped vessels along, and it accelerated manufacturing. Steam still turns turbines to generate electricity.

The gentle aspect of steam is just as important to commerce and industry as the energy it can capture (from burning coal, nuclear reactions) and convert to more useable and easily distributable forms (electricity). Steam alone can clean many substrates. 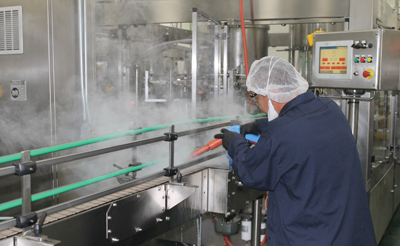 The National Park Service (NPS) recommends steam for cleaning acid-sensitive stone in valued structures as well as carved stone and in some cases interior masonry. NPS makes the recommendation because steam removes dirt and debris without detergents or pressure.

Power washing contractors often include steam cleaning among their services.

Pressure washing and steam complement each other in important ways.

“I would say fabrics would be better cleaned with steam instead of pressure as they can likely tear from the pressure” says Michael Hinderliter, president of Steamaway Inc. in Fort Worth, TX. “Any surface that could be damaged by the high heat that steam produces, like a painted surface” would not be a match, though.

Could power washing contractors expand the services they offer to their customers by adding a steam cleaner to their roster? “Sure, especially in areas where the water runoff needs to be minimized as much as possible,” says Hinderliter. (NPS advocates steam for some interior masonry in part because of that minimization.)

Steam is water in vapor form. That definition serves in the general lexicon, but in the industry, the terms dry (or dry saturated) and wet steam are used. Dry steam is water vapor under sufficient pressure (at its temperature) that there is no liquid component.

If there is no water in suspension (liquid component zero), steam quality is 100 percent, and the steam is designated as dry. Wet steam (or unsaturated steam) retains a liquid component (droplets or mist) at its given temperature and pressure.

That’s the short version of steam terminology, which is much more extensive. Again, the quality, or nature, of steam is determined by the interplay of temperature and pressure. For instance, there is superheated steam (which can be wet or dry), and there is supercritical water.

[Interested in an excellent primer on types of steam? Visit the website of TLV®, a steam specialist company devoted to steam plants and risk mitigation, to find the best introduction we have seen online.]

Each type of steam has a different energy content. The measure of energy content per unit mass of a substance is called “enthalpy” in physics. When manufacturers design steam producing units for any use (from moving turbines to cleaning), the term enthalpy becomes part of the lexicon. In lay terms, wet steam has less usable heat energy than dry steam.

Steam garners much approval from various regulating entities because of what it accomplishes without the aid of chemicals. The Environmental Protection Agency (EPA) recommends steam (in lieu of chemical fogging) to eliminate bed bugs (very tough to eradicate from a dwelling once established). Steam penetrates baseboards, bed frames, and other furniture where the flat bugs can take shelter. 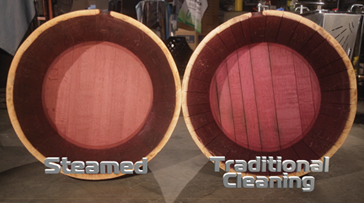 Finding ways to optimally deploy steam to clean equipment like conveyors used in the food industry has long interested the U.S. Department of Agriculture. Not the same as disinfecting, cleaning removes organisms such as listeria, E. coli, and salmonella that could otherwise be present in small (and non-concerning) amounts before they multiply and cause problems.

Using steam to disinfect food processing lines is not practical in the way that sterilization of medical instruments and other tools in autoclaves is. Contained steam, as in autoclaves, allows sufficient time to pass to ensure an end to microbes on the tools. Heat alone can kill microbes; it does so by causing proteins in the entities to denature and coagulate. But steam amplifies heat value and speeds the process.

Ensuring that steam attacks only conveyors—and not the components that keep them moving—is part of the challenge in cleaning with steam in food processing (or manufacturing) lines. For discrete parts of a line, separated from gears, lubricants, and electrical connections, it may work well.

Some markets that were traditionally in the domain of contractors using pressure washers are being taken over by dry steam approaches, says Yujin Anderson, general manager at Steamericas Inc. in Inglewood, CA. She adds that two government initiatives propelled the shift.

The need to meet the ever-more-exacting environmental requirements for reducing water use and capturing and cleaning wastewater is one. Anderson explains this has its origin in the Clean Water Act, which the EPA administers.

The other initiative is the newer Food Safety Modernization Act (FSMA), which the FDA [Food and Drug Administration] administers, explains Anderson. FSMA aims to prevent foodborne illness (instead of countering it) by rigorous hazard analysis and risk reduction across the food production sector.

Instead of cleaning totes with pressure washers, for instance, steam may be the better choice. Steam can clean and sanitize (disinfect) without chemicals. The FDA even reports on studies of using steam to clean carcasses to avoid contamination of meat.

In her comments, Anderson emphasizes that she is referring to the utility of dry steam, and she reminds us to heed the distinction always between cleaning and sanitizing. 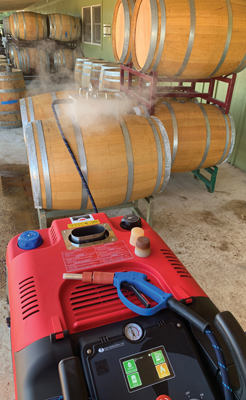 “Cleaning is removing visible particles; sanitizing is reducing invisible micro-organisms to an acceptable level, often referred to as one- through five-log reduction,” says Anderson. Log reduction terminology acknowledges that pathogens will remain even after sanitization.

Power washing contractors have many possibilities for using both pressure washers and steam cleaners. “As a real-world example, we have a heavy volume car tunnel car wash where customers use dry steam to loosen up brake dust, bird droppings, and dried-up pollutants as a pre-rinse process before sending cars through the tunnel, which enhances the wash quality,” says Anderson.

Many automated systems already combine pressure washing and steam. “Large wineries in the West Coast use automated barrel washer systems which are hooked up to both pressure washing systems and dry steam,” explains Anderson. “High volume and pressurized water get rid of residues inside, and steam is applied as a finishing touch to the final sanitizing step.”

What are some specialty cleaning challenges? “For example, food processing plants avoid using pressure over 200 psi as high pressure contributes to spreading food particles and potentially bacteria. It becomes a source of cross contamination, which they try to avoid at all costs to ensure food safety of their products,” says Anderson.

Structural limitations sometimes make steam the better choice. “Many manufacturing plants, regardless of the industry, do not have drains in every corner,” says Anderson. “So, cleaning with water becomes a big hassle.”

Steam applications continue to grow. Parts that might be damaged by high pressure, such as molding trays used by automotive parts manufacturers and HVAC filters, are being cleaned with dry steam, says Anderson.

Dry steam is tapped to sanitize soil and in thermal weed removal. And Anderson points out that the banning of toxic chemicals, such as the herbicide atrazine (since 2020 in the U.S.), has prompted the search for alternatives. 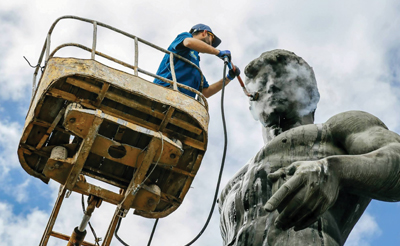 “Water conservation is the most obvious benefit of using dry steam,” says Anderson. “Take as an example the Optima Steamer line, for which the flow rate is only 0.08 gallons to 0.25 gallons per minute. We have many happy distiller, brewery, and winery customers achieving better barrel sanitization and rehydration results with a fraction of water and energy use compared to the traditional methods of using full capacity water and chemicals.”

Dry steam allows mobile car wash and detailer businesses to “thrive” because they navigate jurisdictions with different wastewater regulations free of worry about fines, explains Anderson. And with no need to carry a water tank, fuel economy improves.

“Any cleaning method comes with pros and cons,” says Anderson. Dry steam requires nearness to the target and/or a controlled cleaning technique.

“Pressure washing is to a machete as dry steam is to a scalpel,” says Anderson, borrowing an analogy from one of her sales reps. “Any heavy cleaning task of a large object is a job for pressure washers.”

As for the calls Anderson gets about dry steam cleaning driveways in winter… True, there is no runoff or freeze-over, “but it would take forever to do the job,” she says.