Editor’s note: Cleaner Times wishes to thank DECO Products Inc. and Vector Laboratories for their help in updating this Chemical Glossary in 2022, which previously was published in the August and October 2012 issues of Cleaner Times.

An asterisk signifies an ASTM definition. Many of the definitions are more focused on the cleaning setting than on chemical rigor.

Effective pressure washing is a process that consists of five primary elements—pressure, flow, temperature, time, and chemicals. Because each individual cleaning application is a bit unique, the primary elements of pressure washing vary with each application. While the first four elements (pressure, flow, temperature, and time) can usually be determined on the spot, the fifth element—chemicals—requires some particular insights.

Determining which chemical product to use in a particular cleaning application requires an understanding of the chemicals, and that begins with a basic understanding of chemical terms. The following listings are offered as a help.

PEL—Permissible Exposure Limit. An exposure limit established by OSHA’s regulatory authority. It may be a time-weighted average (TWA) limit or a maximum concentration exposure limit. See also TLV and IDLH.

Peptizing—The breaking up of solid particles into extremely small particles—so small they act as if they were in a true solution.

pH—A chemical symbol expressing the degree of acidity or alkalinity of a solution. Technically speaking, it is the negative logarithm of the hydrogen ion concentration in a water system. On the pH scale, most products run from 1 to 14; the lower numbers are considered on the acidic side and the higher on the alkaline side. A pH of 7 is neutral, neither acidic nor alkaline.

Phosphatized*—Metal surfaces that have been chemically treated with an acidic phosphate solution to provide a protective metal phosphate coating on the metal surface. Used as a corrosion protectant and as an excellent surface for paint adhesion.

Phosphoric acid—An inorganic acid (used in soda drinks, for example) that is commonly used for metal cleaning and rust removal.

Polymer—A commonly used definition of polymer is a material that is composed of many monomers (from 10s to 1000s) all linked together to form chains. A monomer can be composed of from one to many atoms which form the base unit, which is repeated to form a polymer.

Precipitate—A material that has settled out of solution.

Pre-mix—Mixing concentrated chemical with water prior to the product being used in the wash.

Processing aids—Agents used in the manufacture of detergents to prevent caking, to promote flow properties, and to standardize product density.

RCRA—The Resource Conservation and Recovery Act is environmental legislation aimed at controlling the generation, treating, storage, transportation, and disposal of hazardous wastes. It is administered by the EPA.

Reactivity—The characteristic of a material to produce a chemical reaction.

Reduction—This happens when an atom gains one or more electrons during a chemical reaction, meaning the oxidation number decreases. An example of redox can be seen in the fading of paint and spotting on aluminum through use of harsh acidic or alkaline products resulting in the breaking down of the surfaces.

Resin—In polymer chemistry and materials science, resin is a solid or highly viscous substance of plant or synthetic origin that is typically convertible into polymers. Resins are usually mixtures of organic compounds.

Rinse agent—A super concentrated liquid drying agent and rinse aid used in touchless and automatic car washes, which is similar to the “Jet Dry” used in dish washers. This is not a “wax.” It aids in the spot-free drying of a vehicle after the wash cycle is ended.

SDS Sheet—SDS Sources—Safety Data Sheets have replaced Material Safety Data Sheets (MSDS). SDSs are one of many tools for evaluating chemical hazards. Before beginning work with a hazardous material, consult several safety sources to obtain sufficient information on how to protect yourself. The SDS is the government-required form that must be on file for each chemical manufactured. The information contained on an SDS describes hazards, precautions, ingredients, etc.

Salt—The by-product of the reaction of an acid and a base (caustic).

Sanitizer—An agent that reduces the number of bacterial contaminants to safe levels as determined by public health requirements.

Saponification—The result of a reaction of soluble fats and oils (organic acids) and an alkaline material (caustic). The process of making soap.

Separation—A process by which chemicals are separated in solutions.

Sequestering agent—Any compound that, in aque-
ous solution, combines with a metallic ion to form a
water-soluble combination in which the ion is substantially inactive.

Soap—A cleaning compound made by treating a fatty acid with a caustic chemical.

Sodium hypochlorite—A type of chlorine bleach used in soft washing and roof washing. Typically used in laundry detergents. Effective against mildew but does little to remove dirt or other surface deposits.

Soil redeposition inhibitor or soil suspending agent—A detergent ingredient that aids in keeping soil suspended and dispersed in wash water and thus minimizes the settling or redepositing of soil on fabrics being laundered.

Soluble—Capable of being dissolved in a liquid.

Solution—A homogenous mixture formed by dissolving one or more substances into a liquid.

Solvent—The component of a solution that is present in the greatest amount. It is the substance in which the solute is dissolved. Usually, a solvent is a liquid. However, it can be a gas, solid, or supercritical fluid. The amount of solvent required to dissolve a solute depends on temperature, pressure, and the presence of other substances in a sample.

Super concentrate—Stronger mixture than a concentrate. This product, when initially diluted, becomes a concentrate that is diluted again before use.

Surface active agent (surfactant)—An organic chemical that, when added to a liquid, changes the properties of that liquid at a surface.

Surface tension—The force required (usually expressed as dynes per square centimeter) to penetrate the surface of a non-agitated liquid.

Surfactant—A surface–active substance (such as a detergent). Surfactants are compounds used in an array of cleaning products for their ability to lower the surface
tension of water, in essence making the molecules slipperier, so they are less likely to stick to themselves and more likely to interact with oil and grease.

Synthetic detergent—A term describing washing and cleaning products based on synthetic surfactants rather than traditional soaps. 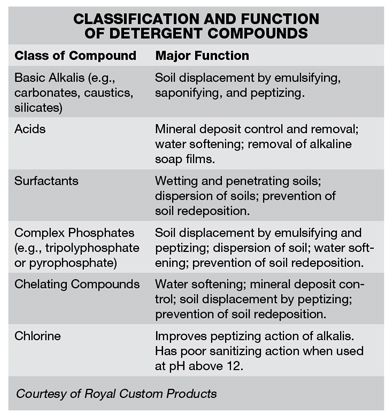 Technical Data Sheet (TDS)—A document provided with a product that lists various pieces of information about the product. Often, technical data sheets include product composition, methods of use, operating requirements, common applications, warnings, and pictures of the product.

TLV—Threshold limit value—Concentration of a material that is an upper limit and is safe for working with continuous exposure for an eight-hour period. See also PEL.

TWA—Time-weighted average exposure is the airborne concentration of a material to which a person is exposed, averaged over the total exposure time—generally the total workday (8 to 12 hours).

Thickening agents—Used to increase the viscosity (thickness) of liquid detergents.

Total dissolved solids (TDS)—Typically used to find the total amount of all solids in water (water hardness is a measure of only calcium carbonate).

Touchless—The removal of soil with chemicals and high pressure only, no mechanical agitation.

Toxic Substances Control Act (TSCA)—Administered by the EPA, the Act regulates the manufacture, handling, and use of materials classified as “toxic substances.” This was updated on June 22, 2016, in what is called the Lautenberg Chemical Safety Act (in print URL is congress.gov/114/plaws/publ182/PLAW-114publ182.pdf)

Trisodium phosphate (TSP)—An alkaline substance used as a cleaning compound. Environmental laws prohibit its sale in some regions. Because it contains phosphate, a fertilizer, it encourages growth of mildew, mold, and algae.

UEL or Uel—Upper Explosive Limit of a vapor or gas; the highest concentration (highest percentage of the substance in air) that will produce a flash of fire when an ignition source (heat, arc, or flame) is present. At higher concentrations, the mixture is too “rich” to burn.

UN regulated material—Those chemicals or blends that by their chemical nature are deemed regulated by the U.S. DOT and the shipment of which is closely controlled and permitted only by trained and certified individuals.

USDA approval—A cleaning formulation that has been approved for use in stated applications, typically food processing plants.

Use-dilution—The final concentration at which a product is used.

Viscosity—“Thickness” of a liquid. The property of a fluid that resists internal flow by releasing counteracting forces. The capability of a solid to yield continually under stress. 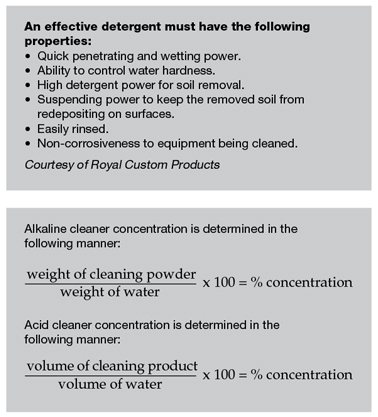 Warewashing—Washing of dishes, utensils, glassware, pots and pans, etc. in commercial and institutional areas such as in restaurants, hotels, motels, hospitals, schools, nursing homes, and such.

Washing Soda—A common name for a commercial form of hydrated sodium carbonate. It is also called “salt soda” and “soda.” Washing soda is used as a detergent booster.

Water base—One (of a substance or solution) using or having water as a medium or main ingredient, “a water–based coating.”

Water hardness—Soluble metal salts, principally those of calcium and magnesium (and sometimes iron and manganese) that when present in water in sufficient amounts create cleaning problems. In the case of soap, insoluble soap curds are formed. In general, water hardness reduces the ability of surfactants to perform their cleaning function. Hardness is expressed in grains per gallon (gpg), grains per liter (gpl), or parts per million (ppm). One gpg equals 17.1 ppm. Water essentially free of calcium and magnesium is described as soft; if appreciable amounts of either or both are present, it is called hard.

Waterproofing—Making impervious to water; especially covered or treated with a liquid or solid material to prevent permeation by water.

Wetting—When the solid has a high affinity for water—in which case it is called hydrophilic (high energy, e.g., glass)—water spreads. This means that coatings and sealers should be able to wet out (flow) when applied to a substrate. An example would be that a sealer, whether penetrating or topical, should flow or penetrate, wetting out the whole paver (meaning the pavers are hydrophilic). There are many types of wetting agents used in the formulation when manufacturing a sealer or coating.

Wetting agent—A compound that increases the ability and speed with which a liquid displaces air from a solid surface, thus improving the process of wetting that surface. It reduces the surface tension of water, allowing it to spread—or absorb—more freely.

Whiting—A marred appearance, generally light colored, in a sealant, with examples below. Whiting occurs when a coating is applied to a substrate and gets wet; for example

A. A coating is applied to the substrate and before it completely dries or cures, it starts to rain, and the coating gets wet and re-emulsifies and gives the coating a white effect.

B. A coating is applied to the substrate and before it completely dries or cures, the water sprinkler system comes on and the coating gets wet and re-emulsifies and gives the coating a white effect.

C. A coating is applied to the patio, walkway, driveway, etc. It rained prior to sealing the substrate, and the applicator did not wait long enough for the water to evaporate from the bottom side of the pavers, and the pavers could still be wet as well, even though they looked dry. When the sun comes out, the UV rays are now drawing water out from under the pavers, as well as the pavers. The coating has trapped the water in and it is now visible, giving the white appearance to the paver. This might take two to four weeks before the white appearance will completely go away, meaning the water has completely evaporated. This only happens when the coating has been applied too soon after it rained, and the pavers are sitting in water.

Zephiran®—A benzalkonium chloride solution used when skin (not eyes) comes in contact with any acidic product used for aluminum brightening.