Tranquility and tension. The truth is there’s a happy balance point between the two. Every successful workplace environment establishes that point and maintains it. But how?

It’s easy to become frustrated when things go wrong, such as a delay in a delivery or a piece of equipment that malfunctions. Ensuring a rational response to the unexpected is essential to calming tense situations.

Two components gird a reasoned response. One is to hire employees who already understand the temperament expected of them as part of the job. The other is to reinforce a measured response in all things, especially by reminding team members of how they can keep their responses within calm parameters despite unforeseen events.

Brian Carter, president of Armstrong-Clark Company in Sonora, CA, establishes workplace expectations during the interview, which provides clarity. “All prospects meet with Jake Clark and I—owners—and our plant manager, Chris Olson,” he explains.

“During the interview, we give the prospect a plant tour and have the prospect witness the work he or she will be doing,” says Carter. He adds that his company puts a great deal of emphasis on references so that it has a good basis for determining if the individual interviewing should be hired.

Once an individual joins the team, the established team itself provides a context and a model for how to handle difficult situations. Keeping the team on course benefits from guidance, as needed, of course.

“While it is rare to have a tense situation, we actually take every case that involves conflicts or tension with customers and discuss it in meetings,” says Doug Rucker, owner, Clean and Green Solutions in Porter, TX. “Most of our incoming calls are recorded through our software, and we are able to play them back and discuss ways to improve handling of these types of calls.”

We cite the balance between tranquility and tension because no business owner wants team members to become so placid that they begin to substitute serene thoughts for serious work or that they begin to mistake chatting excessively with customers for being cordial. The negatives in those scenarios are well appreciated.

Moreover, an excess of either tranquility or tension can lead to safety issues, if the former begets complacency or the latter begets neglect. An employee must have the wherewithal to self-assess.

Team members must be able to almost reflexively ensure they are following all protocols and not becoming absent minded—either in their dealing with customers or their attention to detail. If some sort of irritant is distracting and causes a lack of focus, matters can become serious.

At the same time, when tension builds, the cohesiveness of a team starts to fray. And as things unravel, disruption and risk increase.

Serendipity led us to the program developed by Ken Bullinger, owner of Ken’s Window Cleaning Inc. in East Schodack, NY, which aims to keep all members of the team focused and in harmony. We had contacted Bullinger to ask him for input on the topic of safety basics when working off the ground (e.g., ladders, lifts, scaffolds). When we talked, he took the initiative to recommend a topic he would like to see covered in these pages. It happened to be a focus on avoiding interpersonal conflict, and we are glad to have his perspective to add.

“Each person’s individual success is dependent on the team,” explains Bullinger. Success comes to all when interpersonal conflicts are not part of the day.

Before he developed his program, Bullinger too often encountered instances in which something could cause an escalation resulting in less-than-good feelings. For example, one team member goes to pick up a tool, and the tool is missing. If there’s a leap to the conclusion that “you” took the tool, things can intensify quickly.

Pause. Think. That’s the essence of what Bullinger’s program teaches team members. The fundamental component is to think in terms of “I” and go from there: “I need the tool, and I am frustrated because it’s not where I expected it to be.” 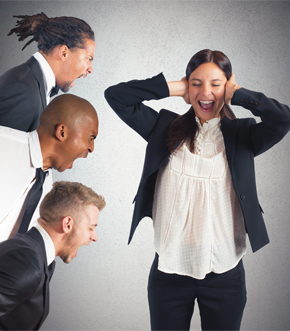 “Never put the focus on another person,” says Bullinger. By acknowledging that one’s own discontent with not being able to find a tool (or have access to a bigger truck or a ladder) is not the result of what another has done, the team member can pull back to a calmer state of mind.

In August 2019, Bullinger committed time and money to his program, which he formalized in seven 15-minute sessions over a period of two and one-half weeks (every other day). Employees arrived at work fifteen minutes early on those days. They turned phones off. They ate breakfast together, and they were paid for the time.

During the sessions, Bullinger had his team focus on one of seven points for eliminating conflict. The point of the first session sums up all to come: “The problem is the problem. Your teammate is not the problem.”

Bullinger requires all statements of concern that employees make must be put in first-person form. Take as an example the desire for a larger truck when none is available. “It annoys me that I need a bigger truck and there is not one available.” That’s a tension-defusing statement about a situation.

“Someone else got a bigger truck.” That’s a disruptive statement about a situation because it’s a “you” statement. And such statements—setting up “the other”—should be shunned.

Bullinger says his program has been a huge success. He would like to see many members of the industry develop programs for their team members. With “business owners taking responsibility, things get fixed,” says Bullinger. That applies across all aspects of business, including giving team members the tools they require to work together without conflict.

Tools of All Sorts

Many contractors, distributors, and manufacturers will, like Bullinger, develop harmony-promoting programs in-house. Yet if they seek assistance with programs, they find a surfeit of options.

To find cost-free programs, start at USA.gov and search for conflict resolution, workplace harmony, etc. Programs vary in approach and in tenor. A quick review of some common program elements follows.

We all know the admonishment to “take a deep breath” to counter any anger that starts to build. Perhaps it’s no surprise we can find detailed instructions for how to take a deep breath—sometimes called the sigh breath. A deep breath really does (physiologically) allow the individual to relax a bit in order to regroup (pause, collect thoughts, and clarify).

There’s an adage in contract bridge about those who are always playing the last hand. Get stalled on something that happened in the past (i.e., a hand played poorly) or what could have been done differently, and there’s the real likelihood it will interfere with the present (the play of the current hand). In other words, learn from mistakes. And move on, resolved not to repeat them.

Experts in conflict resolution remind us—in many ways—to stay in the present. An encounter may precipitate a memory of a bad experience in the past. But that’s a separate experience and it should be forgotten.

When conflating past and present, one becomes susceptible to forgetting completely about the issue at hand. Consider the breakdown of a machine.

Ten years ago, a machine may have broken down because the person providing service did not follow protocols. To jump to the conclusion that the breakdown is again the fault of a person—an entirely different person—providing service is nothing more than a wild assumption. It’s also a catalyst for fueling tensions.

Energy expended in assumptions will only be wasted. Try to figure out what is wrong and work toward a resolution. If in the course of the effort it’s discovered someone erred; there will be time to address the error in a tempered way.

At the juncture of talking with someone about the error, it will be important to do so while listening carefully. (It’s another good time to keep the “you” from out of the equation. Instead “I’m concerned because this machine failed on the jobsite. I would like to know why it failed.”)

The uniqueness of the individual means that each person brings different needs, styles, perceptions, and goals to the workplace. Striving for harmony in the workplace is not the same as trying to make all members of a team adopt the same styles and goals; rather, it enables them to work together despite their uniqueness.

The balance point between tranquility and tension is the place work gets done. If no one had a goal (a timeline, a production total, etc.) in mind—if it were all just laissez-faire attitude—there would be no tension. Some tension is good; it is a motivator.

As aphorisms go, there’s a lot to be said for the adage about horses pulling in the same direction. A team may be made up of spirited individuals who are happy to go their ways when not focused on a task—and that’s a good thing. But on the job, it’s pulling together that brings good, calm, and tension-free outcomes.