Becoming Better and Better: PWRA and WCRA Convention Wrap Up

Becoming Better and Better: PWRA and WCRA Convention Wrap Up

On August 7 and 8, the Pressure Washing Resource Association (PWRA) and the Window Cleaning Resource Association (WCRA) held “The Huge Convention” at the Gaylord National Resort & Convention Center, in National Harbor, MD. All spring and summer the attendance numbers continued to swell for both contractor attendees and vendors who wanted to exhibit at what was shaping up to be the single, biggest, non-org event of the year; it didn’t disappoint.

People began to arrive early in the week, many taking advantage of the Washington, D.C. area to spend time with their family touring our nation’s monuments, museums, and the White House. But it was not all fun and sightseeing for those heavily involved in the meticulous planning and seemingly flawless execution of this event. Thad Eckhoff and Chris Lambrinides worked for more than a year to pull this off, but they were quick to say that it would not have been possible without the support of some amazing help: Kate Lambrinides, Jennifer DeFrancesco, Kendra DeBree, y’all take a bow now. You’ve earned it. And just like on awards night, Eckhoff exclaimed, “There were so many people who helped so much, I can’t think of them all right now, but I just want to thank them all.” 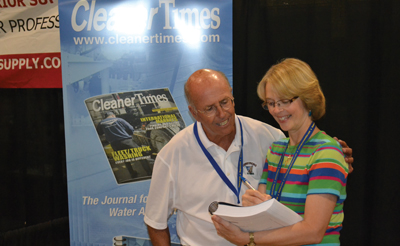 The PWRA and WCRA did make their attendee goal, with 500-plus contractors in attendance. Registrations came in from Canada, the UK, Bahamas, Brazil, Germany, China, and almost every state in the USA. As the photos, videos, and Facebook check-ins and tweets began to populate on social media, another amazing thing happened, the number of last minute arrivals soared, and the event went viral. The early registration line on Friday morning looked stagnant, but it wasn’t. The sheer volume of walk-ins seemed to go on forever, stretching all the way back through the center’s expansive atrium.

The keynote speaker, Howard Partridge of Phenomenal Products, and Santiago Arango had the crowd on their feet Friday morning, and his keynote set the tone for the entire weekend. There were plenty of diverse, educational seminars offered, with three seminar choices offered every hour all day on Saturday. Count ‘em folks, 17 speakers, four topics on Friday, and 15 topics on Saturday, and that’s not counting the early bird roundtable talks hosted by Terry Miller at 6:00 a.m. on both Friday and Saturday.

The number of vendor booths was greater than 50, and the number of vendor attendees was greater than 150, and the booths braced themselves to handle the crowd. The show gave away more than $30,000 in prizes. Each name tag had a number printed on it, and contractor attendees were automatically entered to win. If you weren’t there, they quickly moved on to another number. 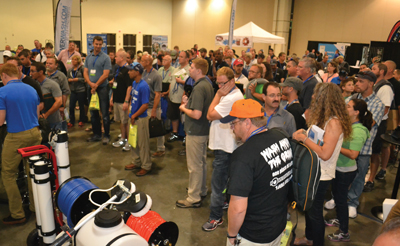 If it sounds like the industry has taken notice of the PWRA and WCRA events, well, you’d be correct. Former BOD members and past presidents from a number of associations were present, including the IWCA (the IWCA had a booth), the PWNA, and the UAMCC. It all began eight years ago in New Orleans. At that time, vendors came to the show but there were no booths. Then, in 2013, the PWRA and WCRA hosted their first event at the Gaylord Opryland Resort & Convention Center, and set the space to hold up to 200. In 2014, they reserved the space again, but doubled the needed capacity believing they could attract 350–400 attendees. After a closer look at the demographics of their attendees and membership, they decided to move the convention in 2015 to the Gaylord National Resort & Convention Center in Maryland, which is on the cusp of D.C.

After a truly record-breaking, mind-blowing, downright exhausting event, the contracts have been signed to bring the convention back to the Gaylord National Resort & Convention center for 2016. Vendors are already reserving booth space; some are even doubling their space. And the buy now link for getting your convention tickets? Well, let’s just say that some attendees began using the old 2015 link the day after the event to buy tickets for the next year. Seasoned professionals have been seen in several threads on social media and BBS’s coaxing the younger companies to put aside $20 a week starting now to help ensure that they can attend next year. The dates have been set. Mark your calendar now for August 12 and 13 because the PWRA and WCRA events just seem to get bigger every year.

Why have these particular events been so successful? Eckhoff credits the mix of talents working on each show, but he emphasizes one very critical, humbling note: take the feedback seriously. We all know how incredibly hard it is to take criticism, especially when something that you might refer to as your “baby” is being criticized by more than 650 people. “You have to take the criticism and the ideas if you want to become better and better.”