Beautiful British Columbia —Getting to Know Our Neighbors to the North

This is the first of a four-part series exploring the pressure cleaning industry in Canada, focusing on Canada’s most westerly province, British Columbia (BC).

With about 4.8 million people, BC is Canada’s third most populated province and is fifth in terms of physical size, measuring an impressive 367,699 square miles. It is larger than any of the U.S. states except Alaska. With such a vast area, BC offers everything from rugged mountain ranges to lush river valleys, rolling plains, rain forests, fertile farmland, spectacular beaches, lakes, and more. This province-wide natural beauty makes it a fabulous destination for outdoor adventures; however, the province as a whole is not ripe for opportunities for the power washing industry.

From a business perspective, to fully understand BC, the province needs to be broken down into four geographic regions: the Lower Mainland, the Interior, Vancouver Island, and the North. While all regions can (and do) successfully support power washing service providers, large manufacturing and distributorships are concentrated in the Lower Mainland.

Four Regions at a Glance

The North: This region encompasses the northern two-thirds of the province. Only about five percent of the province’s total population live here, in small cities or rural areas. Industries include tourism, agriculture, energy, mining, and forestry, to name a few. As a matter of interest, the famous “Mile Zero of the Alaska Highway” starts in northern BC in the city of Dawson Creek.

The Interior: Journey south about 400 miles from BC’s northern border, and you come to the Interior, which includes the Thompson-Okanagan area at www.thompsonokanagan.com. This diverse region is about the same size as the state of Indiana. It is home to more than 90 communities and 200 licensed wineries. The landscape is as varied, boasting the tallest peak in the Canadian Rockies to the semi-arid climate of the Okanagan Desert. It is a region rich in indigenous culture, with sun-soaked valleys surrounded by sweeping grasslands and connected throughout by a network of rivers and lakes.

Vancouver Island: Fewer than one million people live on Vancouver Island, but those who do feel that they are in paradise (the writer of this article included). The city of Victoria, the province’s capital, is at the southern tip of the Island. It is undoubtedly one of the most beautiful places in beautiful British Columbia! The Greater Victoria area is home to about 400,000 people. As you travel “up Island,” population density decreases.

Beaches, mountains, and rainforests are part of the allure of Vancouver Island. With an abundance of precipitation in the winter months, there are myriad opportunities for pressure washers as mold and moss are a big concern for both residential and commercial property owners. The biggest drawback? Access to Vancouver Island is by either aircraft or ferry, which does affect its suitability as a manufacturing and distribution center for our industry.

The Lower Mainland: This is the most southern region of BC, surrounding and including the city of Vancouver. Vancouver is the financial center of the province, and it is well-connected by land, sea, and sky, making it an international hub for import/export of goods, manufacturing, and more.

With a population of 2.5 million, the Lower Mainland is home to more than 60 percent of the province’s total population and 16 of the province’s 30 most populous municipalities. There are two Regional Districts within the region, Metro Vancouver and the Fraser Valley. And that, says Glenn Clark of High Pressure Solutions at highpressuresolutions.ca, is one of the biggest challenges of doing business here.

“With 16 municipalities, each having their own interpretation of the environmental regulations set out by two Regional Districts, it can be challenging for those who provide pressure washing services,” explains Clark. “You have to know the rules in each city and, in most cases, you must also purchase multiple business licenses.”

With such confusion around environmental bylaws, power washing service providers have to be hyper-vigilant and be sure to have their own Best Management Practices in place. 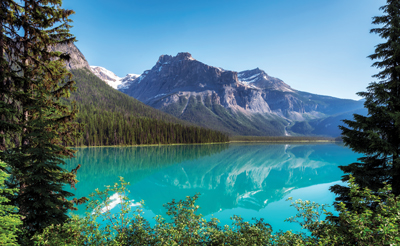 Another big concern, says Clark, is “the high cost of everything.” High housing costs also mean high prices for commercial space. Many parts and supplies manufacturers—in all industry sectors—are opting to give up their retail space in favor of online shopping and warehouses. The power washing industry is no exception.

So why do people choose to live (and do business) in one of the most expensive places in Canada? Weather is one of the main attractions. BC’s Lower Mainland has one of the mildest climates in Canada. Maximum precipitation occurs as rain in winter, with less than 10 percent falling as snow at sea level and increasing significantly as the elevation rises. It is one of few places in the world where you can golf or kayak in the morning and go downhill skiing in the afternoon.

Paul Horsley, from Alberta-based Scotts Pressure Wash at www.scottspressurewash.com, says that they ventured into the Vancouver market about 10 years ago. They recently moved into a brand-new building in Surrey and have grown their Lower Mainland operations to eight employees and a fleet of seven vehicles.

“Operating a business in BC is different, as compared to other parts of Canada, and it is a standing joke that ‘BC’ stands for ‘Bring Cash!’” says Horsley with a smile. “The cost of living, availability of affordable housing, fuel costs, vehicle licensing, insurance, wages, and human resources are all issues. We have to pay higher wages here than in other parts of Canada. Prices for services have to be adjusted accordingly, and it necessitates that we focus on the higher paying contracts.”

Scotts focuses mainly on fleet washing, plus flat work, strip malls, and drive-throughs. Much of the work is done with hot water and, due to higher humidity levels, moss and mold are more of a concern here than other parts of Canada.

For Scotts, setting up in BC made good economic sense because, despite higher operating costs, it enables them to provide services to many of the same multinational companies that they work with in Alberta. They also work with contractors in the Interior and on Vancouver Island to service those clients (and others) with multiple locations.

The success of the businesses mentioned in this article and the accompanying sidebar are positive proof that, despite the challenges, BC truly is a great place to live, work, and play. The fantastic weather that draws people to the Lower Mainland region also make it possible to work year ‘round. Yes, it rains a lot in the winter, and the locals may affectionately call it the “Wet Coast,” but you can continue to power wash in a downpour! And, for power washing service providers with multiple locations, it ensures that they have a revenue stream throughout the winter months, when operations in the colder regions of Canada may be on hold. Best of all, you don’t have to shovel rain.