Deprecated: The $control_id argument is deprecated since version 3.5.0! in C:\home\cleanertimes.com\wwwroot\wp-content\plugins\elementor\modules\dev-tools\deprecation.php on line 304
 Adjusting to Rising Fuel Prices - Cleaner Times

Surcharge. Make that fuel surcharge. We get the meaning either way.

Whether it’s one dollar added to the $9.99 shipping for a rose bush (a bit of extravagance) or the 50 cents per five-gallon bottle of water (a necessity in some communities), a surcharge is as predictable as the sunrise. Everyone who transports goods or moves to provide services must adjust to rising fuel prices.

And that includes the distributors of petroleum products. With the supply of fuel going down, prices are going up. It’s that simple. What’s not simple is communicating to customers a business owner’s dilemma: price adjustments or shrinking profit margins. There’s only so much margin to shrink, and when looked at as a year-over-year phenomenon, the increases are astonishing.

Take regular gasoline prices in dollars per gallon. Each week the U.S. Energy Information Administration (EIA.gov) posts gas prices by U.S. region and state, as well as the increases over the previous week and year. (The prices compiled include all taxes.)

In the same report, Texas recorded the lowest gas price at an average $3.251 per gallon, but that’s still $0.334 more than a year earlier. Regular gasoline is not the worst of it, however.

On-highway diesel fuel prices were $5.728 per gallon in the Central Atlantic region for the week ending October 17. That’s an increase of $1.936 per gallon over a year earlier (more than a 33 percent increase).

“Our biggest adjustment was raising all our prices higher than we usually do every year due to the skyrocketing fuel prices to go along with a very high inflation range of 8.5 percent, which is the highest in over 40 years,” says John Tornabene, owner of Clean County Power-washing in Kings Park, NY.

“Unfortunately, because of all this we had to pass the increases over to our customers so we can still hit profit margins we need to keep our operation running smoothly,” explains Tornabene.

A business must run smoothly to meet the expectations of customers, add customers, and profit. An owner must do what it takes to incorporate price increases. There’s no “waiting it out” when the prevailing conditions show no sign of abating.

“The most difficult thing was notifying our long-term customers of this larger-than-usual price increase that is affecting them like it is everyone else,” says Tornabene, but adjustments must be made.

“Diesel fuel has gone up approximately two dollars more a gallon than it was by the end of last year, and considering my largest flatbed trucks are diesel, this will be expensive as the weeks and months go by,” explains Tornabene.

More than 1,600 miles separate Tornabene’s headquarters in the Empire State and Michael Hinderliter’s homebase in the Lone Star State. But they—like contractors and distributors across the nation—share the same challenge.

“Having to pass the cost on to customers is the most difficult thing about incorporating rising fuel prices into a business plan,” says Hinderliter, the president of Steamaway Inc. in Fort Worth, TX. “Some customers are under-standing; others want to give pushback.”

Is gasoline or diesel more challenging in Texas? “I would say diesel rose the fastest and had the biggest in-crease,” says Hinderliter.

One adjustment Hinderliter’s company has had to make is an added bit of vigilance. It’s just one of the many facets of dramatically rising fuel prices, and it involves fuel cards.

“We have started watching all purchases because the high costs may incentivize some employees to see if they can use fuel cards to fill their own vehicles,” says Hinderliter. But with prices so high, even stealing one time will take a toll on cash flow. And the reality of rising fuel prices is always in view because of “how much it impacts the bottom line,” says Hinderliter.

How do members of our industry keep the bottom line healthy and pay more for fuel? They take every step they can to cut back fuel use.

“Creating tighter routes so that we reduce driving distance and drive time, thereby reducing costs in both fuel and labor to help offset the rising costs of both, is one strategy,” says Hinderliter. 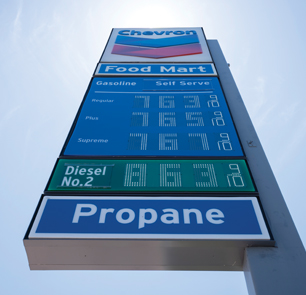 Fuel of All Sorts

Needed for nitrogen fertilizer, ammonia is produced primarily from natural gas. If worldwide natural gas prices go up, the cost of ammonia goes up. Other chemicals, such as those used in our industry, may not be required in the quantities that ammonia is, but their prices also are affected by rising fuel prices.

Not only does it take raw petroleum—in various forms—to manufacture many chemicals, but fuel is needed to manufacture and transport the chemicals. The short of it is this: rising fuel prices are not a single-
point issue.

Global trends in fuel and related- products’ prices track in the same direction, and that is up. The one notable exception is the level price of natural gas along the Gulf Coast of the United States.

The availability of natural gas along the Gulf Coast is an energy bright spot, but unrelated to gasoline the pump. (Even Houston has experienced a $0.94 increase for a gallon of gasoline over the last year. It still had the second lowest per-gallon cost for a metro area after Denver at $3.170.)

It does not take high-powered data analysis to realize when there is more competition for the fuel of all kinds (e.g., oil, natural gas, coal) that’s stalled coming to market, prices will increase for those who refine oil, liquefy natural gas, etc.  Costs will get passed on to industries and consumers.

It’s a given that as fuel prices increase, employees will be paying more to get to work. They will be looking for a wage commensurate with the cost of commuting, and that, too, will add to costs of doing business that are ultimately tied to higher fuel prices.

Again, there are many facets to the issue of rising fuel prices, and not one of them is particularly attractive.

Many ask rhetorically, how is it that a nation that has a huge supply of raw fuel sources could be failing to tap them? It’s a question to mull over for certain. The immediate question, though, is, what strategies can be used to cope with higher fuel prices?

Combine trips, loads, orders, team members in a vehicle, and anything that can be consolidated to reduce the use of fuel. Extract the greatest efficiency from every gallon of fuel used by using it well. That’s the first step, and the one that most of our readers have already taken.

Pitch to get more from each sale. Contractors can give the requested estimate for cleaning an exterior and add an estimate for soft washing a roof or cleaning windows. There will be some takers.

Contractors who are certified to work high and tackle roofs and windows have more flexibility in combining services on a single jobsite. Consider combatting fuel prices with more certifications and consolidated services.

Similarly, distributors that can sell ancillaries with a primary machine and deliver them as a bundle may cut costs a bit. The same applies to manufacturers.

Eventually, no matter which measures are taken to adjust, price increases become necessary. Some customers will not be happy. Some will understand, but they may still voice frustration. (Have a diplomatic person explain the increase and allow such customers to vent a little.)

What about that surcharge? For those who are optimists and believe costs will reverse, it might be a reasonable course. But the implication in “fuel surcharge” is that it is transient and will disappear. Best to just raise prices if that’s not the case, and it’s probably not.