the word resounds unceasingly in our ears. Day in and day out, it is expressed and communicated, deciphered and ex-pounded. In an active industry such as waterblasting, however, safety must be acknowledged as more than just a word; instead, as a practice. At Terydon, the value of human life always outweighs the performance in the field. With that being our focus, we firmly believe that safety and production can still coexist. Over the span of the 20 years of our existence, “safety,” to us, has never been just a word.

This philosophy is showcased in our expanding product line, evolving as modern features have become available to promote safety. The market demanded the removal of flex lance from the end-user’s hands. Terydon delivered the SHR-39 Dual Static Hose Reel and the NHR-1000 Rotary Hose Reel, not only removing the flex lance from the end-user’s hands but also making the workplace safer by completely containing all of the lance. In abrasive cutting, a central concern was the hazardous occurrence where a cutting track would blow off of the surface in mid-cut. Terydon solved the issue by imbedding its gravity sensor in its jack track cutting system, a feature that instantly turns off high pressure water if any irregular motion is detected. As the slips, trips, and falls agenda has been targeted as of recent, Terydon delivered The Lunch Box, a wireless, universal control for a variety of pneumatic tooling from Terydon and competitors alike, all via touch screen tablet. This breakthrough marked the pinnacle of wireless advancement and eliminated the accumulation of air hoses between tools and traditional control pendants.

As the new obstacle of “hands-free surface prep” navigates into the limelight, contractors, plants, and manufacturers alike race toward the quickest and most viable solutions to achieve safety for the end-user while ensuring a satisfying level of production.

However, as complete removal of high pressure water has been the recent target, the waterblasting industry has failed to notice that it has strayed from this original goal. Mandates have been engraved in every piece of safety legislature, though no clear resolution has been brought to the table. Shotgunners have been replaced with large, excavator-style hydroblast robots. Even though this exchange has been quite effective in a mix of applications (e.g., performing pad work), the limiting factors to this invested solution speaks loudly on the shut-down. The weight of the tool creates needs for special means of transportation. No longer can an accepted surface cleaning tool be placed in the back seat of a pick-up truck. Should cleaning be needed up one or more flights of stairs, the robot must be relocated via crane; down-time costs begin to build. Once on site, the excavator-style cleaner is limited by catwalks, doorways, manways, and a variety of obstructions, which lie in its path. Because of the limitations of these robots, it is estimated that only 40 percent of surface prep work can be performed by these tools, leaving the remaining 60 percent of work undone. Since the work must be completed, the end-user must grab his shotgun, have a variance written, and perform the unsafe clean, which the industry was originally intending to avoid! So with the cry for a safe yet effective solution to this surface prep predicament, Terydon presents its matter-of-fact safe answer called LiSENSE Technology. 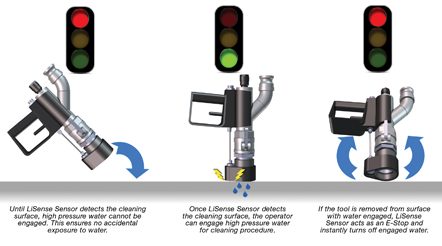 LiSENSE Technology was originally developed at the request of the U.S. Navy in conjunction with Penn State Applied Research Labs for cleaning inside submarines. The issue concerning the matter was the lack of cleaning space between obstructions for the accepted 48-inch barrel shotgun. Therefore, the solution to this dilemma was constructed around a different approach—instead of starting from scratch to devise a completely new product, let’s simply make our existing tooling safer. From that angle, the patent-pending LiSENSE Technology was established, to equip the existing hand tools with surface-detecting sensors, which determine when the high pressure water can be engaged. An advantage from this angle is the existing, decade-plus acceptance of the traditional shotgun and hand-held surface cleaner; thus, the learning curve is nearly non-existent. The inductive proximity sensor, the cornerstone of the product, has been chosen because of its robust build and ability to perform on a consistent basis in a variety of fields: from airplanes to beverage and food can conveyor lines, roller coasters to automobiles. Securing these sensors and the electronics with an IP67 rating certifies their performance in the extreme applications of the waterblasting industry. This technology is powered by 24VDC power, which is readily available on site via pump batteries, or is offered with a convertor from 110V outlet power for a convenient alternative. All of this compiles into a successful package for Terydon to offer the industry, yet another prime example of the unforeseen safety benefits from electric components when implemented into our existing waterblasting technology.

The task of the LiSENSE Technology is simplistic at the core: see surface first, then operate. The proximity sensors function by requiring detection of a metallic surface; high pressure water will not be triggered until the tool is held to the surface and the sensors confirm the plane. This safety feature focuses on the accidental trigger engagement of the water when the tool is not on the surface. Where a traditional hand tool would create an extremely hazardous occurrence to the operator and his surrounding co-workers, it is virtually eliminated due to the sensors’ inability to detect the cleaning surface. This function is an enhanced solution with an objective parallel to the common secondary hand trigger on hand tools, refusing the actuation of high pressure water until both the primary and secondary triggers have been engaged. The dual-function of the proximity sensors comes into action once the surface is located and the water is engaged to clean. While the operator performs his standard cleaning procedure, the function of the LiSENSE Sensor converts to an Emergency Stop Dead-Man Switch; if the tool is removed from the proximity of the surface, the sensors no longer identify the surface and instantly shut off the water. Again, this inherent safety measure avoids the threat of injury via high pressure water. 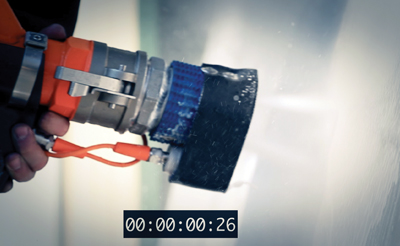 A prevalent safety feature adapted industry-wide is the barrel length of the conventional shotgun or swivel gun. Because of high pressure water risk, many plants have mandated a barrel of at least 48 inches so that workers cannot expose their lower body to water at the barrel’s end. However, by gripping the gun body with its intent to clean, the long barrel creates an operational disadvantage due to the pivot point created at the end-user. Simple math dictates that the reaction force created at the end of a long barrel results in lack of full control by the end-user, indirectly constituting a hazardous work area. With the addition of the LiSENSE sensors, the same precedent applies to barrel length. Sensors detecting the surface for water engagement, then converting to an E-Stop if removed from its proximity, invalidate the precept of the long barrel. Moreover, a shorter barrel proposes enhanced control over the water at the end, suppressing a considerable amount of the back thrust. Where the rules for a long barrel gun have been implemented with the correct intent, the LiSENSE Technology introduces an alternative of a safe, shorter gun. 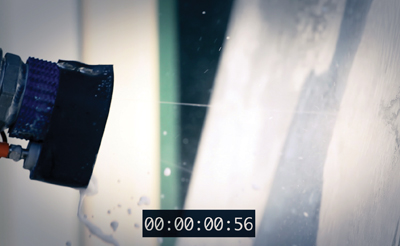 Moreover, and quite possibly, the most significant contribution that the LiSENSE Technology brings to the industry is its remarkable response time for turning off high pressure water. In an industry fashioned around pneumatics, we have accepted that tool performance would be compromised to the dubious characteristics and shortcomings of air power. One essential focus is the response time of the pneumatic signal over distance traveled. For example, in controlled settings, the performance time it would take a pneumatic signal from an air actuated tool to reach a remote safety valve is 2.2 seconds, every 35 feet. At those same settings, however, the LiSENSE electric signal response time is 0.06 seconds, more than 30 times faster than air! In an industry where two seconds of high pressure water exposure could mean the difference between life and death, narrowing that timeline down to mere milliseconds—offered by the electric signal performance—is remarkable, and raises yet another safety milestone that has otherwise been unheard!

The applications to which the LiSENSE Technology can be applied is only limited by the length of your high pressure hose. It is an accepted practice that excavator style cleaners have surpassed the productivity and safety of the hand-gunner in pad work. The LiSENSE Technology is not designed to replace the excavator, but instead to complement it. While the pad work is being performed, a hand-gunner can now do what he does best, clean hands-on: up two flights of stairs, down a cat walk, through a manway, up scaffolding, and around an obstruction, all while achieving ultimate safety.