A Critical Platform for the Future

A Critical Platform for the Future

Production, movement, inspection, or another manufacturing process done without assistance from a human? That’s automation. A process accomplished by a machine that moves or acts by itself? That’s robotics.

Now, the short story made longer: robots are a form of automation. While components such as conveyors, bottle fillers, and stackers along a production line are automated, they are also limited in their repertoire. A robot could switch tasks and change the order of carrying out tasks—convey, fill, and stack—just as a human could.

Robots take many forms. Those that resemble humans account for the name, which has an unfortunate root word (loosely, forced labor). Czech writer Karel Capek introduced the word in 1920 in his play R.U.R. Rossum’s Universal Robots.

But long before the robot had a name, it had left the drawing board. In the 13th century, the inventor Roger Bacon, who spent a decade in jail for witchcraft, made a robot along with a telescope, microscope, and gunpowder. Bacon is just one of many who attempted across the centuries to combine articulated and autonomous movement in a machine. 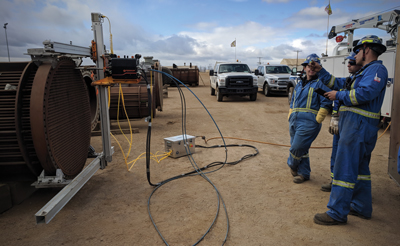 Today, robotics has become something of a passion in the sphere of science and industry. Rightly so. Robotics allows activity in environments where humans cannot function without life support. NASA has a robotics-specific website, robotics.nasa.gov, that encourages everyone from school-age children to inventors of any age to learn more and contribute their ideas and expertise.

Robotics also expands the capabilities of surgeons and interventionist physicians, who can use exceptionally small tools inside a patient by guiding the action of tools through a computer and human collaboration.

The National Institute of Standards and Technology (NIST) at the U.S. Department of Commerce considers robotic systems an “essential tool in strengthening U.S. manufacturing and competitiveness” at www.nist.gov/programs-projects/robotic-systems-smart-manufacturing-program. NIST ties robotics to “smart” manufacturing.

With robots and humans overlapping in work areas, there is the potential for a bad encounter leading to robot-related injuries and deaths. In 2017, the National Institute for Occupational Safety and Health (NIOSH) at CDC established a Center for Occupational Robotics Research (CORR) to track and react to (intervene to prevent) robot-related incidents. NIOSH tallied 61 robot-related deaths between 1992 and 2015.

NIOSH-recorded incidents aside, robots typically improve safety for workers. Not only can they work more safely in some settings (e.g., in confined spaces, in spaces with hazardous chemicals), but they can also work at repetitive, energy-consuming tasks without wearying.

The five categories of robots NIOSH uses are both comprehensive and helpful when aiming to get a clear view of the many ways that robots participate in workplaces. They are collaborative robots, co-existing/mobile robots, wearable and powered exoskeleton robots, remotely controlled autonomous vehicles and drones, and future robots with AI.

Although the Occupational Safety and Health Administration (OSHA) does not currently have specific standards for the robotics industry, it does offer a summary of guidance provided by the American National Standards Institute (ANSI), Inter-national Organization for Standardization (ISO), and Canadian Standards Association (CSA).

ANSI, for example, offers TR 406 on safeguarding, which focuses on design of safeguards for humans in a setting where both humans and robot systems are acting. See the OSHA link at www.osha.gov/SLTC/robotics/standards.html to access the summaries of guidance from ANSI, ISO, and CSA.

The pace of integration of AI in robotic systems—we have all read about robots that can learn—keeps accelerating. Expect holographic systems to be in the future mix, too.

On the next page, representatives of two companies deeply engaged with automation and robotics offer insight into the scope and significance of the technologies in our industry. Auto-mated and robotic applications are improving safety, increasing efficiency, and leading to better outcomes.

“Within the last 10 years, we have integrated control of our hands-free robotics through touch-screen tablets,” says Terry Gromes, Jr., automation specialist/product support at Terydon Inc. in Navarre, OH. “This change has been profound across the waterblasting industry, where primitive methods of control such as a stationary control pendant are still being used.”

The innovation by Gromes’s company amplifies the meaning of safe distance. “Using the computing power of the tablet allows us to make our robotics ‘smart’ so that they can automate processes to perform the cleaning without the interaction of the end user,” he explains. 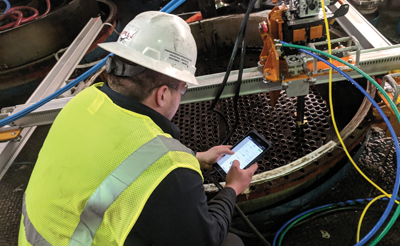 “Most notably, however, the wireless control allows the end user to remain outside the ‘blast zone,’ creating a safer working environment,” says Gromes. “Due to these features, the tablet technology has earned us multiple safety awards.”

Gromes is gratified by the positive response end users have to robotic systems. “From my perspective, what fascinates me is the reaction from the end user when using our robotics during a cleaning application,” he explains.

“After using older cleaning methods—mostly hands-on in unsafe conditions—the end users really appreciate having a ‘smart’ hands-free tool to remove them from the hazardous atmosphere while being more productive. Once they do this one time, they never want to go back to the previous methods.”

The next 10 years will be fascinating ones in countless ways, and Gromes suggests what they will look like for robotic technologies.

“The safety and production enhancements of robotics as well as the continuous integration of electronics and computing devices into these industries will allow fully automated robotics to perform more cleaning processes without the interaction of a human,” says Gromes. “This eliminates the risk of human error, while enhancing the productivity and efficiency of the cleaning application. Due to this, robotics will be a critical platform for the future of waterjet industries across the next decade.”

“Automation is being driven for safety more than for productivity,” says Andrew Chilkiewicz, marketing manager at NLB Corporation headquartered in Wixom, MI. “Keeping operators away from pressure and keeping operators safe from potential injury from various equipment and operator failures is paramount.

“Because there are so many waterjetting applications in a myriad of industries, many systems need to be custom engineered to a specific application,” continues Chilkiewicz. “As a manufacturer, we are asked to design a system for a single, unique application or customer, which is sometimes not cost effective for the customer or our company.”

Safe distance carries meaning in just about every situation, and using distance to increase safety is a common strategy across industries.

“Getting the operator out of the danger zone and at the same time becoming more productive is important,” explains Chilkiewicz. “We’ve seen, and been a part of, a movement toward wireless remote operation, such as the Mini-ARM or Micro-ARM Peinemann Flex Lance systems.”

Remote operation is not only enhancing outcomes but also gaining recognition as a means to risk reduction. “These remote systems are becoming more accepted and used with greater familiarity by the operator,” says Chilkiewicz.

“Five years ago, customers actually thought they would be in more danger because of automation,” explains Chilkiewicz, putting emphasis on “because.” “That’s gone 180 degrees in the last five years.”

As for how important robotics will be to the pressure washer and waterjet industries across the next decade, the assessment of Chilkiewicz is that the practicality of robotic systems must be evaluated setting by setting.

“True robotics won’t grow as much as other automation in the pressure washing industry,” says Chilkiewicz. “Automation use has increased but not necessarily robotic automation.”

“For example, an operator who’s four stories up on a catwalk has limited opportunity or accessibility to many robotic equipment types, but you can use equipment with automation functionality,” says Chilkiewicz. “As performance im-provements are demanded by our customers—whether it’s faster, lighter, better performance—our company has to meet those demands, all the while keeping the interface between operator and equipment simpler to use and easy to maintain.”

Highly capable automated and robotic systems are still appraised by a prospective buyer in the timeless way. The buyer wants to know the price.

“If the end customer is hesitant to pay for automation, how do you make it economically make sense to invest in the R&D and expense of automation development?” says Chilkiewicz. “Our customer is always going to ask, ‘Can I get my money back out of it and make a profit?’  Like everyone and any industry, they are being pressured by competition pricing.”

Chilkiewicz tells us why his company is motivated to invest time and money to develop automated systems. “We simply have to be, knowing our customers are being challenged by their customers to provide safer, automated services to win bids and be competitive,” says Chilkiewicz.

“Our customers are expecting our company, as a leader in waterjetting technology, to be able to offer the kinds of equipment to meet those needs,” explains Chilkiewicz. “We try to project future end-customer requirements in a variety of ways and proactively develop and manufacture that equipment.”