Few organisms are as wily as bacteria. Harsh environments do not deter them. Escherichia coli (E. coli) lives in the human gut. Even outside their preferred habitats, bacteria can live for days and hitch a ride to new places via dirty containers, clothes, or skin. Staying one step ahead of bacteria and other pathogens (e.g., mold and mildew) is part of good hygiene. Simple washing of surfaces with soap and water generally reduces the number of pathogens to such low levels that they are not a threat.

In food processing facilities, personal hygiene must be coupled with scrupulous cleaning of equipment and containers. The frequency of cleaning and the type of cleaning are determined by the required results. Chemicals, water, and steam all come into play.

Sanitization gets surfaces very clean, eliminating most pathogens. In reality, though, it does not create a sterile surface. Bacteria are ubiquitous. When they are widely dispersed, they do not pose much of a threat. The E. coli that thrive in the human gut become a big problem only when they multiply to levels that imperil kidney and other organ functions.

Look at it from the side of the swab test used by inspectors of food processing facilities. Inspectors do not expect to find zero pathogens on a swab; they expect to find so few pathogens that the pathogens are well below a threshold that poses a danger.

Although the U.S. Food and Drug Administration (FDA) has always focused on preventing contamination as well as responding to contamination, the Food Safety Modernization Act (FSMA), which was signed into law January 4, 2011, emphasizes prevention. However, there are many quirky parts to federal food safety initiatives in the United States. The stringent standards growing from FSMA do not extend to facilities outside the country, which are many. Try finding a package of frozen vegetables from any well-known company—Bird’s Eye to Green Giant—that does not contain some vegetables from nations out of compliance with U.S. standards. Another peculiarity is that certain food products may reach U.S. customers without clear labeling of the country of origin.

Yujin Yoo Anderson, general manager and owner of Steamericas in Inglewood, CA, recommends viewing the positive in the FSMA. “Our industry needs to be more aggressive about educating the food industry on sanitation in general,” she says. “Steam can benefit the food industry greatly and reduce outbreaks in many cases. The FSMA is keeping food processors on their toes.”

Yoo Anderson sees the FSMA as the trigger for higher cleaning standards. “It’s no longer about accomplishing the cleaning job in the fastest and the cheapest way, but it’s about doing it right and ensuring the cleaning practice encompasses sanitation requirements beyond getting rid of visual components,” she says.

Moreover, Yoo Anderson sees opportunity in the clarification of high expectations by regulators. “In my opinion, the FSMA has just opened up another door for our industry,” she says. “The food industry has to change their cleaning protocols to comply with the FSMA. They will be interested in buying equipment not only for cleaning but also for sanitizing.”

Understanding the nature of the steam used to clean in food processing removes misconceptions. “We en-counter misunderstanding even when talking to equipment dealers,” says Yoo Anderson. “Many assume that steam is wet because we had used the term “steamer” synonymously with a hot water—temperature raised to 212 F—pressure washer many decades ago.”

Not only in the food processing industry but also across industries, using steam with a low moisture content is beneficial and the prevailing method. “When we talk about steam, we mean dry vapor steam—either saturated or overheated steam—which has very little moisture content and is more desirable for food processors or sanitizing any equipment in general,” says Yoo Anderson.

“When we talk about a steamer, we should first define what kind of steam the steamer is able to produce—wet steam or dry steam,” says Yoo Anderson. “Many do not realize that true steam—vapor created from boiling water over 212 F—loses its temperature and pressure very quickly. Hot water in its liquid state can maintain its temperature or pressure for hundreds of feet, but steam cannot because it is a form of vapor.”

Run a 200-ft. hose from a true vapor steamer and the result will be less pressure, lower temperature, and wetter steam than what it would have been from running a 30-ft. hose, explains Yoo Anderson.

Any food processing system, from a deli slicer to a conveyor in a processing plant, affords pathogens ample places to take up residence and multiply. Cracks, worn parts, scratches—all defective points—are places where food can get caught and bacteria can grow. It’s a reminder that cleaning away dirt and sanitizing to suppress pathogens must be done in conjunction with good equipment maintenance.

(For a refresher on steam cleaning, see the March 2013 Cleaner Times article on “Steam Cleaning” via pubs.royle.com/display_article.php?id=1314753.)

What are the benefits of choosing steam for cleaning? A big advantage is that steam may eliminate the need for dismantling food processing machines.

The Optima Steamer from Yoo Anderson’s company allows for cleaning in place (CIP). “It saves manpower and time while increasing effectiveness,” she explains.

Here’s one way the CIP works: After meat processors are bagged (covered with a tent of sorts), steam is injected. The steam reaches 160 F or more for 15 to 20 minutes to
sanitize the equipment.

“A very well-known salad processor in California does the same with a large lettuce spinning piece of equipment,” says Yoo Anderson. “Otherwise they would have had to dismantle the equipment (including unbolting it from the floor) and move it to a contained area with a drain to use a pressure washer, chemicals, and manual labor to reach nooks and crannies. Most of the bigger food processors have an in-house lab that conducts swab testing to verify that proper sanitation is done. We have proven repeatedly that steam works much better than the traditional way.”

Steam cleaning is used across the food processing industry, explains Yoo Anderson. “Better-known applications are barrel and tank sanitation for wineries and breweries, sanitation of conveyor belts and other food equipment for commercial bakeries, and pasteurization of products such as pistachio nuts.”

Can steam cleaning eliminate the need for chemicals to sanitize? “It makes chemical-free sanitation definitely possible,” says Yoo Anderson. “When it comes to general cleaning, the answer is a more reserved ‘yes.’ While steam may be able to clean, in general it takes more time because dry vapor steam doesn’t come with thousands of psi or three to five gpm. There are certainly applications for steam cleaning when dealing with equipment sensitive to moisture or pressure, or facilities without drains for wastewater, but it’s not for every cleaning application. When it comes to sanitation, yes, steam will replace chemicals.”

The choice of a cleaning method is a factor of the preferences of the owner of a food processing facility and what regulators expect. In Europe, says Jim Sheperd, general manager of Suttner America Company in Dubuque, IA, chemicals are preferred.

Whichever choice a food-processing facility makes for cleaning and sanitizing, there is one goal: no contamination that could harm the health of a consumer.

The responsibility that manufacturers and distributors have for food products means that should illness-causing Salmonella bacteria be found in peanut butter or E. coli on fresh spinach, the manufacturer at least—and probably the distributor, too—may be faced with substantial legal claims as well as fines from regulators.

Manufacturers of cleaning equipment are always adding to their offerings to help processors avoid contamination of their products. For example, in March 2016, Goodway Technologies in Stamford, CT, announced a line of color-coded dry vapor steam brushes. The color coding enables the restriction of brushes to a single area within a plant or line, thereby reducing the chance of cross contamination.

In some parts of the food industry, regulations constrain approaches to cleaning. The FDA’s HACCP [Hazard Analysis Critical Control Point] regulations establish the parameters for cleaning juice, dairy, and seafood plants, for example. Although a facility owner may prefer not to use chemicals (including detergents), such use may be prescribed.

It’s about what works best.

European programs in cleaning and sanitizing are a five-part process. Most food plants are using satellite systems where pressurized water is sent from a central pump or “pump farm” to satellite stations inside the different departments of a food plant. The main advantage is that the chemical is added locally in place so that the most efficient and effective detergent and disinfectant are chosen for each cleaning application. Compressed air is used for the application of foam. 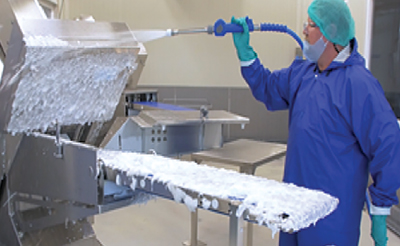 Foam is used in the cleaning and sanitizing processes because it has multiple benefits: the chemical is contained in the foam bubble, which reduces chemical use; the foam/chemical “hangs” or “dwells” on the surface giving it more time to work; it uses less water; foam is very visible [easy to separate applied and missed areas, prevents over-spraying]; and foam injectors are designed to apply foam to high walls from ground level without the need of scissor trucks.

The following process steps must be carried out in order: 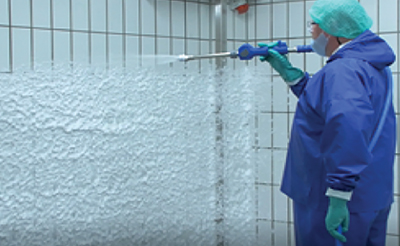 2. Clean—the cleaning is carried out by putting a foam layer of a suitable detergent on the remaining soil. The job of the detergent is to dilute the soil or film for removal in the rinsing process. The flow rate of water during the foam procedure is around 2 gpm.
3. Rinse—the presence of organic matter dramatically reduces the activity of sanitizers. Sanitizers are dramatically affected by the pH of the solution. Many chlorine sanitizers, for example, are almost ineffective at pH values above 7.5. This means all remains from the cleaning process have to be completely rinsed off. The rinsing is carried out by the full-flow capacity of the pump or satellite.

4. Sanitize—European cleaning programs foresee a chemical disinfection of the food-contact surface. Therefore, the right disinfection chemical is evaluated and chosen for each specific application. Generally, the longer time a sanitizer chemical is in contact with the equipment surface, the more effective the sanitization effect. This is done by foaming the sanitizer to achieve the longest possible exposure time.
5. Dry—when clean and sanitized equipment becomes dry, it is stored; dry equipment helps to prevent new growth of bacteria.

To save water, energy, and reduce the amount of necessary chemical to a minimum, the right equipment and accessories are an absolute must. The approach also has to withstand the rough environments in the food-production process. That’s why virtually all leading manufacturers of cleaning machines or cleaning plants in Europe count on foam to properly clean and sanitize their equipment.