This is the time of year when everyone is really busy, and employers often have their staff working longer hours to try to keep up with the demand. The Fair Labor Standards Act (FLSA) currently requires employers to pay non-exempt employees overtime at a rate of one and half times their normal hourly rate of pay (x 1.5 per hour) whenever an hourly employee works more than 40 hours in a workweek. According to the U.S. Department of Labor, blue collar workers are not part of an exempt class of workers accord-
ing to the FLSA. While it could change this year, Federal law currently states:

The exemptions provided by FLSA Section 13(a)(1) apply only to ‘white-collar’ employees who meet the salary and duties tests set forth in the Part 541 regulations. The exemptions do not apply to manual laborers or other ‘blue-collar’ workers who perform work involving repetitive operations with their hands, physical skill, and energy. FLSA-covered, non-management employees in production, maintenance, construction, and similar occupations such as carpenters, electricians, mechanics, plumbers, iron workers, craftsmen, operating engineers, longshoremen, construction workers, and laborers are entitled to minimum wage and overtime premium pay under the FLSA, and are not exempt under the Part 541 regulations no matter how highly paid they might be.

Some states require overtime pay in additional circumstances and at different rates. In addition to what you read here, you’ll want to check with your own state to make sure you’re following the letter of the law as it applies to hourly workers and overtime in your area. The fact is that overtime violations are an extremely common source of FLSA penalties, resulting in back pay, fines, and damages to be paid. Let’s look at a few overtime scenarios.

In a two week pay period, John works the following hours: week one he works 30 hours, and week two he works 50 hours. How much overtime is John entitled to? If you said 10 hours, you are correct. The hours of each work week are separate from any other work week. They cannot be averaged together to avoid paying overtime.

What must be factored into an employee’s regular pay rate when calculating overtime? Several things could impact the pay rate. The employee’s hourly pay rate is the most common one, certainly, but shift differentials and nondiscretionary bonuses also affect the calculations. However, vacation time and sick time do not. Some states may have other factors that apply, so check your state.

Now let’s just suppose that Sarah, a non-exempt employee, is employed by the same company but performs two jobs, one as a receptionist making $10 per hour and the other as a stock clerk making $12 per hour. In one workweek, Sarah works 10 hours as a receptionist and 40 hours as a stock clerk. In this case, to calculate overtime you’ll have to determine Sarah’s weighted average of pay. First calculate $10 per hour rate x 10 hours, which is $100. Next calculate $12 per hour x 40 hours, which is $480. Add the $100 and the $480 to get $580. Next, take $580 straight-time pay divided by 50 hours worked. The answer is that Sarah’s weighted average is $11.60 per hour. Now you can determine time and a half correctly as required by the FLSA. As a note, your state law may have different rules for when there are two or more rates of pay. Always check first.

Now let’s suppose that Cray-Zee Widget Company has a written policy prohibiting employees from working overtime without prior company authorization. Bob, a non-exempt Cray-Zee employee, works one hour of overtime without any authorization. Is Bob entitled to overtime pay? Yes, he is, and so is any other non-exempt employee who has worked overtime, regardless of any requirement for preauthorization. No company policy may supersede the FLSA. While the employer may discipline an employee for working without authorization,
he or she may not withhold the pay resulting from the hours worked.

Janice’s work schedule is 8:30 a.m. to 5:00 p.m., Monday through Friday. She’s an hourly employee and gets a half hour of unpaid time for lunch each day. Last week, Janice worked her normal schedule but chose to work through her lunch time on two days. Does she have to be paid overtime under FLSA? Yes, she is entitled to one hour of overtime pay. Under the FLSA, the meal period should be at least 30 minutes without interruption. Janice must be fully relieved of all duties for the purpose of eating her lunch. Some states have further stipulations about meal and break times, so make sure you check with your state.

Connor has already worked 40 hours this week but hasn’t completed an important project that’s due. He stays an extra hour to finish it, but tells you that he doesn’t need to be paid overtime since he missed the deadline. Are you required to pay Connor the extra hour? Yes, because under the FLSA, non-exempt employees like Connor are entitled to overtime whenever they work more than 40 hours in a workweek. Connor cannot waive his right even if he does so voluntarily.

Larry is a highly-skilled mechanic and is paid a salary of $800 per week. This week, he worked more than 40 hours. Is overtime due Larry? Yes, it is. Larry doesn’t meet the FLSA’s overtime exemptions criteria, because he is performing manual labor. Employees performing manual labor, or employees who perform work involving repetitive operations with their hands, physical skill, and energy, must be classified as non-exempt and paid overtime whenever they work more than 40 hours in a workweek. It’s also important to check state law to see if any other circumstances apply.

Sifting through federal, state, and local overtime laws can be tricky. Make sure you carefully review all requirements applicable to your business before making overtime calculations for your payroll. Those states listed as having no provisions are bound to follow federal law. It is also important to note that there is currently a bill, H.R. 1180, that has passed the House of Representatives that could mean changes to overtime law are on the horizon at some point in the future. Remember, when paying employees, follow the current law.

According to Workplacefairness.org the following state provisions apply: 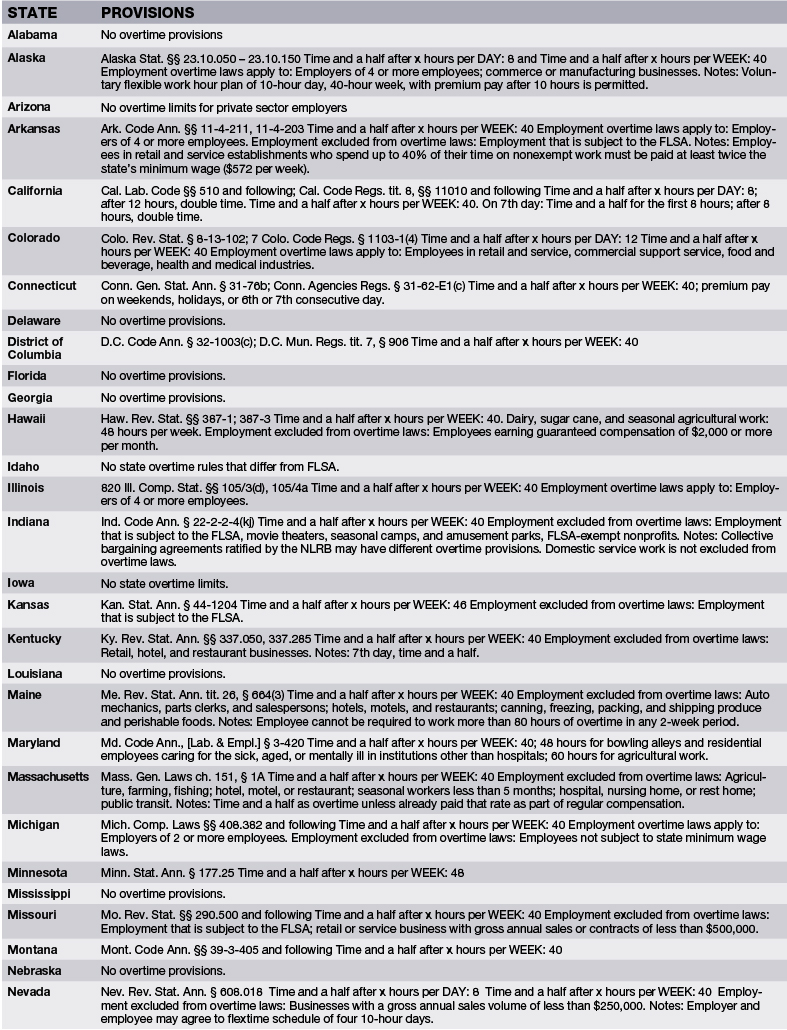 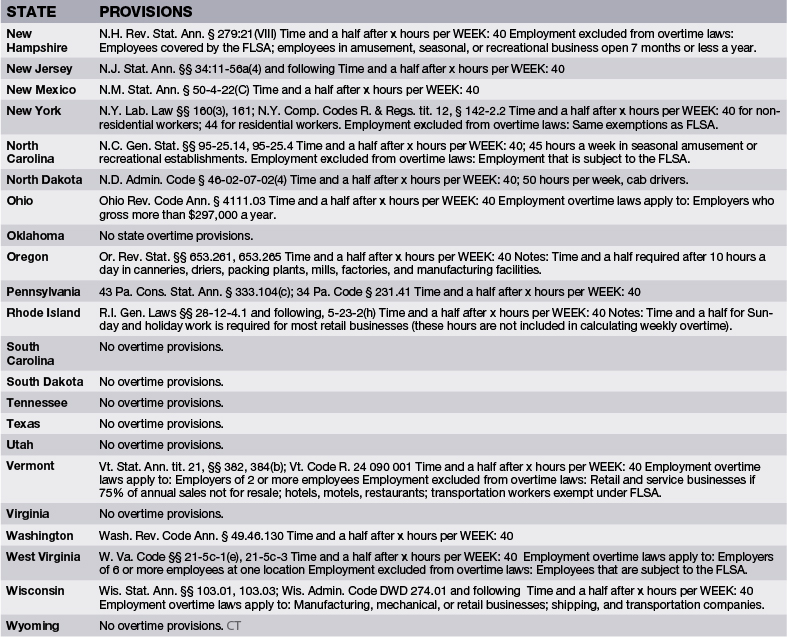