Editor’s Note: On July 16, Bob Farley of Farley’s Inc passed away. His obituary can be read on page 10 in the September 2018 issue of Cleaner Times. Below is a blog entry written on July 30, 2018, by one his granddaughters, Leslie Crawford to honor his legacy.

All of his life my Papa, Bob Farley, loved to catch fish. And kill deer. He absolutely loved to use both of these God-given bounties to provide a good meal to a crowd of family and friends.  In my mind, this is his legacy.  One that lives on in his children, grandchildren, and great-grandchildren. My first fishing trip with him was to the Salmon River near Sunbeam, ID. I was about six months old. Okay, I’m 100 percent sure I didn’t actually go fishing on that trip, but I was there in camp. For moral support, and to listen to his fish stories. According to photo evidence, I was quite intrigued! 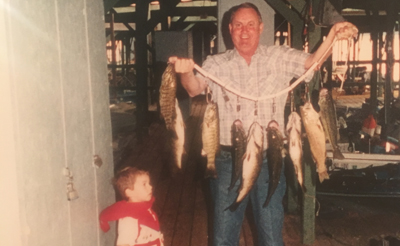 Papa with a stringer of bass with my cousin, Henry, Bull Shoals Lake, approximately 1990.

My next trip to Idaho came when I was a teenager, and it was Papa’s turn to listen to my fish stories, after floating the river with my Uncle Melvin and Cousin Lacie and loading up a stringer so full of trout the two of us girls could barely hold it up. (There’s photo evidence for this, too, but I haven’t been able to lay my hands on it yet.)  On the same trip, Lacie and I floated the “narrows” of the North Fork of the Salmon River in inflatable kayaks… while Meemie and Papa and our family followed along and watched us from the road above. I remember wondering why they would do that when they could go relax and do their own thing. Looking back, I’m sure it was a combination of concern for our safety and love for seeing us have fun that kept them there, watching over us.

Some of my best childhood memories are from his lake house.  It sits at the end of a gravel road overlooking Bull Shoals Lake in the Ozark Mountains of North Central Arkansas. It is a hidden gem on the White River, with deep clear water, rock bottoms, and beautiful sheer cliffs. It’s a special place. I’m not sure how many miles I’ve traveled at trolling-motor speed around that lake, watching my Dad make cast after cast and trying to keep up. Or how many stringers of nice bass I’ve seen held up at the marina by my immediate family members.  I’ve helped Papa catch perch and bait the jugs for catfish many times—although I didn’t always get up early enough (or stay up late enough?) to run them in the morning. 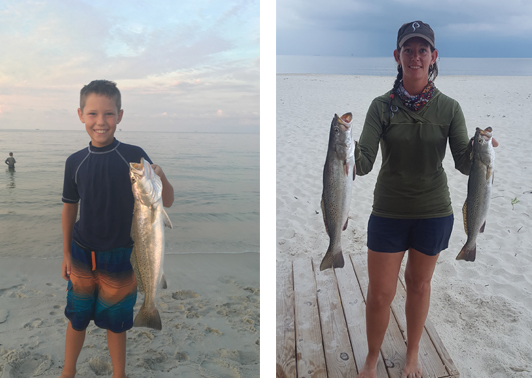 The one that got the catching started (Ethan on the left). Leslie (on the right) managed to catch a few between bait shop runs while wearing gear from Prois Hunting Apparel (www.proishunting.com).

Those stringers of bass and hauls of catfish made for amazing family meals with quality time around the table.  But what stands out in my mind are the many times this fed more than just our family; the times when those hauls of fish were intended to feed the employees and their families at a company picnic. (Papa started a small manufacturing company, Farley’s Inc., in the late 70s, which thrives to this day.) Or extended family at reunions and big get-togethers.  Or for the countless friends he would invite to dinner on a whim.

As his health declined in his later years, he wasn’t able to fish anymore, but he still loved to eat it! So, those of us who inherited his love for fishing would honor him by bringing our fresh caught fish to fry up for him. I think he loved that just as much as sharing his own catch.

I wasn’t able to be at home with him during his last days here on earth.  My husband Kevin and I were helping to host a family beach and fishing event for the Foundation for Exceptional Warriors in Dauphin Island, AL. And on the day he took his final breaths, we were up early to get bait and haul gear down to our favorite trout fishing hole. 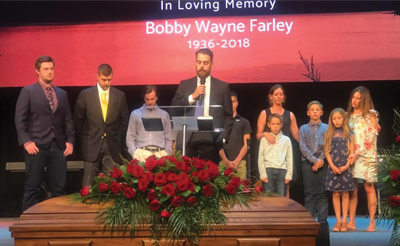 A couple of warriors and their kids showed up a little after sunrise, and we were happy to find it was one of “those” mornings. The fish were everywhere!  Before we had any other lines in the water, my nine-year-old, Ethan, had landed a HOG, 24″ or so. That started us off, and we ended up with a nice stringer of speckled trout!  Everyone had a blast enjoying the sunrise, watching the bait balls, and of course, catching FISH!!!

I decided to make fresh fish tacos for dinner that evening since we had such a haul!  This was quite an undertaking as we were feeding about 20 people with the warriors, their families, and volunteers. I was just starting to cut up the fish to soak in the marinade when my Dad called me with the news that my Papa was nearing the end. The first batch of trout was in the oven when he took his last breath.

It was hard to finish cooking, and I barely ate a thing. As soon as I was done, I immediately drove down the road to where my cousin Lacie was also enjoying the beach. Funny thing is, she booked her vacation week not realizing it was the same week we’d be there helping with our event. God knew what was going to happen, and He knew we’d need each other in this moment. 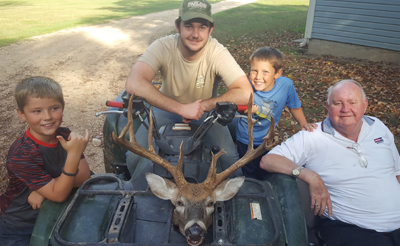 From last fall, Leslie’s brother shows off his biggest buck ever, with her boys by his side, and Papa is proud of the legacy he is leaving.

The next morning my husband went on an offshore charter boat with the warriors, where they caught a huge mess of red snapper.  Some of that fish made its way home in our ice chest.  So the day after his funeral, Kevin and I fried up a mess of fresh red snapper for my Meemie and had a feast Papa would’ve loved. Somehow it was sadly perfect.

My heart was and still is broken, but there is something so beautiful in knowing that I am carrying on traditions he started—that in the exact moment he was meeting Jesus, I was living out his legacy. And I will continue to do so as long as I’m able—at which point I know my boys will take over. His legacy will live on.

In loving memory of my Papa, Bob Farley. He was an outdoorsman, a hunter, a fisherman, a cattle rancher, a businessman, a giver… and so much more.

Leslie Crawford is an avid hunter, fisherman, blogger, photographer, and most importantly, wife and homeschooling mom! She grew up in the Ozark Hills, where Arkansas meets Oklahoma, deer hunting and bass fishing with her family. These days she spends as much time behind a camera as she does a gun, and countless hours behind the computer screen making memories and stories to inspire. You’ll find her photos, videos, recipes, and stories at www.thehuntinghomeschoolhousewife.com. For more information on The Foundation For Exceptional Warriors (The F.E.W.), visit www.exceptionalwarriors.org.